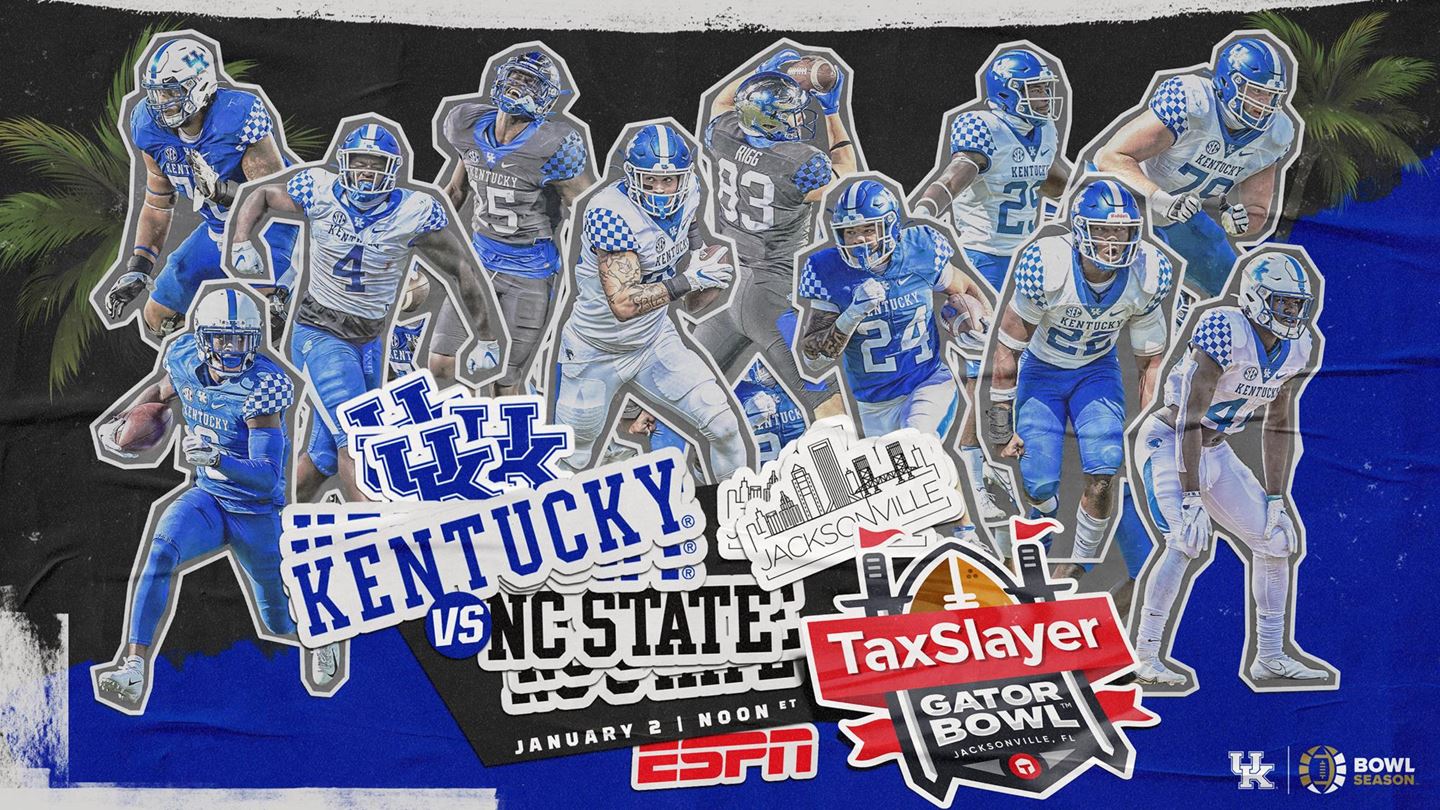 Wildcats to face NC State at noon on Jan. 2 in Jacksonville

Kentucky Football is headed to warmer temperatures for its fifth straight postseason trip. The Wildcats have accepted a bid to play in the TaxSlayer Gator Bowl and will face NC State Jan. 2 in Jacksonville, Florida.

Kickoff is scheduled for noon ET at TIAA Bank Field, with ESPN and the ESPN App carrying the national television broadcast.

Coach Mark Stoops is the first head man to lead UK to five consecutive bowl appearances.  As a program, UK is tying its school record for consecutive bowl games, with four under Coach Rich Brooks from 2006-09, followed by one with Coach Joker Phillips in 2010.

“We are very excited to accept a bid to the TaxSlayer Gator Bowl,” head coach Mark Stoops said. “I want to thank the Gator Bowl for the invitation and I want to thank our administration, Dr. Eli Capilouto and Mitch Barnhart, for their unwavering support this season. It’s been a very trying year for all of us and our team is ready to move forward with a fifth straight bowl game. We look forward to playing a great team in NC State. I’ve known Coach (Dave) Doeren a long time and I have great respect for him and his program.”

Kentucky will make its second appearance in the TaxSlayer Gator Bowl during the current run of five consecutive bowl appearances.

The Wildcats began their five-year bowl run in Jacksonville on Dec. 31, 2016, a 33-18 loss to Georgia Tech. The Cats have had much better success recently, winning each of their past two bowl games: Defeating Penn State, 27-24, in the 2019 VRBO Citrus Bowl and Virginia Tech, 37-30, in last season’s thrilling Belk Bowl.

The Wildcats own a 10-9 all-time record in bowl games.

“The University of Kentucky is very honored to represent the Southeastern Conference in the TaxSlayer Gator Bowl,” said Mitch Barnhart, UK Director of Athletics.  “Having had the opportunity to be in the game in 2016, we have so much respect for Rick Catlett and his staff.   Rick has been an incredible friend of college football and we appreciate all he has done.

“For UK, we’re excited about moving our football program forward with a fifth-straight bowl game. This has been a challenging year and to complete the season in the Gator Bowl is an incredible opportunity.”

All fans wishing to attend the Gator Bowl, including season ticket holders and K Fund members, should purchase their tickets directly through taxslayergatorbowl.com. UK Athletics will not be taking requests and selling tickets through the UK Ticket Office and K Fund Office this year. Due to COVID-19 restrictions and stadium capacity restrictions, ticket availability will be limited and stadium safety protocols will be in place at TIAA Bank Field.

Kentucky enters the bowl with a 4-6 record including winning its regular-season finale having played a 10-game schedule exclusively against Southeastern Conference opposition. The Wildcats have won at least four league games in four of the last five years. UK has won 20 SEC games over the last five years, most in any five-year period in school history.

The Cats are one of only two teams in the country to have played four opponents who were ranked in the top 10 at the time of the game: No. 1 Alabama, No. 5 Georgia, No. 6 Florida and No. 8 Auburn. Three of those games were on the road.

The UK offense has once again relied on a stout rushing attack behind the famed “Big Blue Wall” offensive line.

Kentucky has rushed for at least 300 yards in seven of its past 15 games, including four of at least 400 yards. UK currently ranks fourth in the SEC in rushing offense (175.9). Running back Chris Rodriguez Jr. is the team’s leading rusher at 701 yards and nine touchdowns despite being unavailable for two games. He has four 100-yard rushing games this season, including each of the past three he’s been available to play.

Kentucky will face an Atlantic Coast Conference opponent in its bowl for the second straight season after defeating Virginia Tech last year. NC State finished the season 8-3 (7-3 ACC) in the regular season, winning the final four games of the season and finishing No. 24 in the final College Football Playoff poll. The Wolfpack are led by quarterback Bailey Hockman who took over after Devin Leary suffered an injury early in the season. NC State’s offense averages 31.1 points per game, while the defense allows 29.7 points per game, but finished the season permitting an average of 19.5 points over its last four.