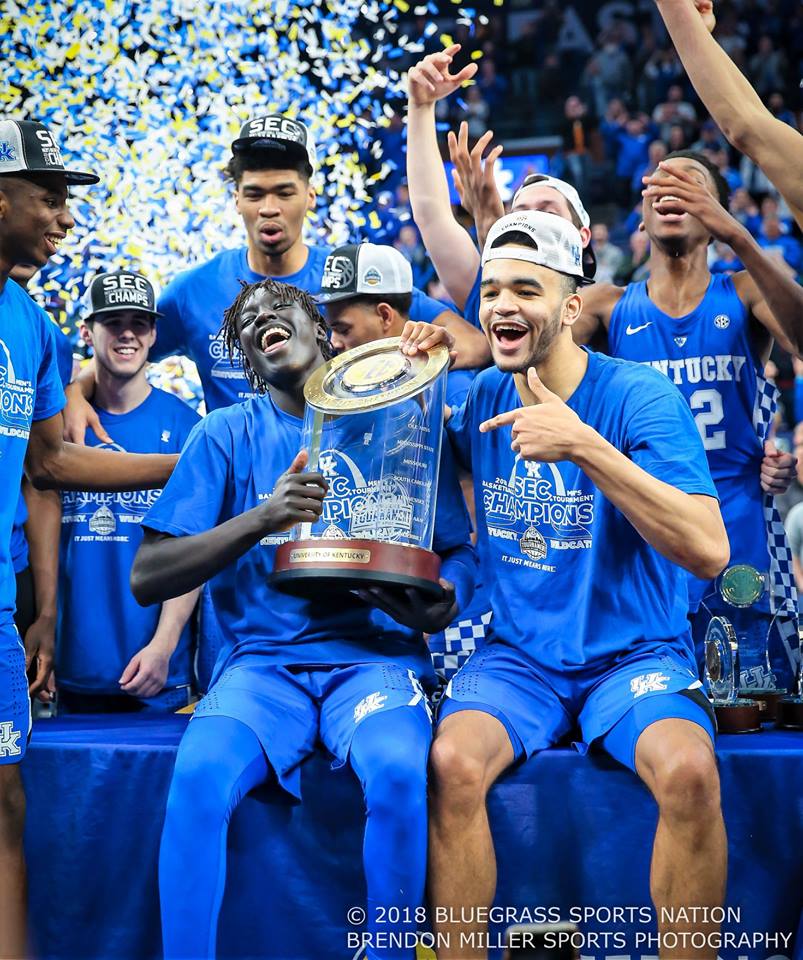 St Louis, MO – Tennessee took an early two point lead on a post-up move by big man Grant Williams, but UK’s Kevin Knox hit a 3 pointer for Kentucky and they never trailed again in the first half taking a 36-31 advantage in at the break.

The Wildcats were clicking on all cylinders in the first fifteen minutes of the game and had built their lead up to as many as 17 points, but a couple of defensive lapses in the last five minutes by the Wildcats allowed UT’s Admiral Schofield to knock down three open 3-pointers and Tennessee to go on an inspired 14 to 3 run to close out the half.

Tennessee had cut Kentucky’s 17-point first half lead down to five by halftime and they went to the locker room with all the momentum.

The Volunteers then started the second half by making their first basket to cut the lead to three.  It was not long before they had tied the game at 38 all with only 17:16 to go in the game. Then less than a minute later Schofield hit a three-pointer for Tennessee and they had their first lead since the beginning of the game at 41-38.

UK called a timeout with 16:34 to try and slow down UT’s momentum.  It worked as Shai Gilgeous-Alexander made a running jumper, then he came down on a fast break and made a lay-up while being fouled.  His free-throw gave UK a 43-41 lead.

Now it was Quade Green’s time to step up.  First Green made a nice move on a fast break for a layup that was goal tended by Tennessee’s Chris Darrington, then he was fouled while making another drive and made both free-throws to give UK a 50-43 advantage.  Green then made a great assist to Knox on a fast break to extend the Wildcats lead.

After a Tennessee timeout, the Volunteers were able to cut five points off the lead to bring it to 52-48, then a 3-pointer by Wenyen Gabriel extended the lead back out seven.

Tennessee made a 9-point run to take a 57-55 lead.  PJ Washington then made four consecutive free throws to help UK to regain the lead at 59-57.

The lead went back and forth for several possessions, then a missed free throw by Knox was rebounded and put back in by Gabriel to give UK a 64-62 edge and on UK’s next possession Gabriel missed a three, but Sacha Killeya-Jones came flying in to dunk the rebound; with that basket the Cats had a four point lead and Tennessee was forced to call a timeout

Kentucky’s lead was still 4-points, when UT’s Jordan Bone banked in a lucky 3-pointer from the left corner to cut the UK lead to one at 68-67 with 1:26 left in the game.

After a timeout, Gilgeous-Alexander made a jumper to put the score at 70-67.  Two free-throws later by Green put Kentucky back up by five. Tennessee was not dead as Schofield put back a rebound for UT to cut the lead down to three.

Kentucky then made enough free throws to secure the victory, as Gilgeous-Alexander made the last two from the charity stripe to set the final score at 77-72 for the Wildcat win.

Gilgeous-Alexander led the Wildcats with 29 points in the game, he was followed by Kevin Knox who put in 18 and Green with 10.