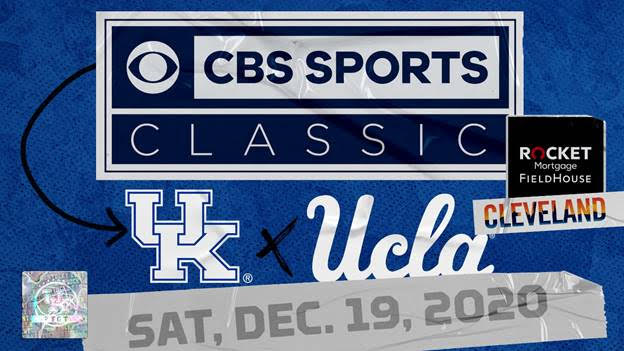 UK will play the Bruins on Dec. 19 in the seventh season of the event

The game will be televised by CBS. The doubleheader will begin at 2 p.m. with North Carolina taking on Ohio State. The second game, featuring UK, will take place no earlier than 4:15 p.m.

Fan attendance at the 2020 CBS Sports Classic continues to be evaluated. The health and safety of fans and everyone involved in the event is a top priority and any fan attendance policies will, at a minimum, follow the guidelines outlined in the Responsible RestartOhio plan. Future announcements related to fan attendance will be made at the appropriate time. Fans can also register to receive event alerts by registering online at cbssportsclassic.com/tickets.

For the Wildcats, it is the second confirmed date and location for the revised 2020-21 Kentucky men’s basketball schedule. UK has not released its new 2020-21 slate after the NCAA Division I Council approved moving the first contest date in Division I men’s basketball to Nov. 25. Last week, UK learned it would play Texas in Rupp Arena on Jan. 30 in the annual SEC/Big 12 Challenge.

The Southeastern Conference has established Dec. 29 and 30 as the new start dates for the conference schedule. With the league scheduling framework in place and the maximum number of games set, UK will have nine nonconference games — if it plays in a multi-team event that includes three teams — to work with. That includes the SEC/Big 12 Challenge.

The full schedule is expected to be released soon. Kentucky is hopeful to honor many of its previously announced nonconference games.

UK Athletics continues to work with university, SEC and state officials to determine capacity and attendance protocols for home games at Rupp Arena. Season ticket holders received preliminary information via email from the UK Ticket Office earlier this week, including a brief survey that should be completed by Friday. Fans with questions or who did not receive the survey should reach out to the UK Ticket Office at (800) 928-2287. Additional information will be communicated as plans are finalized.

The second confirmed game of the 2020-21 season will have no shortage of storylines. For one, it will be a matchup of the two schools with the most NCAA Division I national titles. UCLA leads the way with 11. The Wildcats own eight.

UK is 8-7 all-time vs. UCLA but the Bruins have won three out of four in the series, including the last matchup between the two schools, which took place in December 2017 in the CBS Sports Classic in New Orleans.

In the future matchups of the CBS Sports Classic, UK will match up with North Carolina on Dec. 18, 2021 and Ohio State on Dec. 17, 2022. Both locations are to be determined.

This year’s site, Rocket Mortgage Fieldhouse, is the home of the Cleveland Cavaliers. Rocket Mortgage FieldHouse recently achieved Global Biorisk Advisory Council STAR accreditation after implementing the most stringent protocols for cleaning, disinfection and infectious disease prevent in its facility.

UK played in the building in 2015 en route to the Final Four. The Wildcats put on an impressive display of dominance in a 78-39 drubbing of West Virginia in the Sweet 16 before an epic 68-66 victory over Notre Dame in the Elite Eight to improve to 38-0 on the season.

UCLA is coming off an impressive start to the Mick Cronin era. At 8-9 at the midpoint of the season a year ago, the Bruins went on a tear and were playing some of the best basketball in the country before the COVID-19 pandemic ended the 2019-20 season. UCLA won 11 of its next 14 games and was on the verge of an NCAA Tournament berth.

The Bruins return their top five scorers from a season ago, plus they add former UK guard Johnny Juzang, who appeared in 28 games with two starts for the Wildcats last season before transferring.

Kentucky will take on what is expected to be another difficult schedule with one of the most inexperienced rosters of the John Calipari era. UK will be tasked with replacing 94% of its scoring from last season – most under Calipari – 92.4% of its minutes, 84.4% of its rebounds, 98.6% of its assists and 91.5% of its blocks.

The Wildcats bided farewell to eight of their top nine scorers from a season ago, including all five starters. The lone major returning contributor from last season will be sophomore forward Keion Brooks Jr., who averaged 4.5 points and 3.2 rebounds per game in 31 appearances, including six starts.