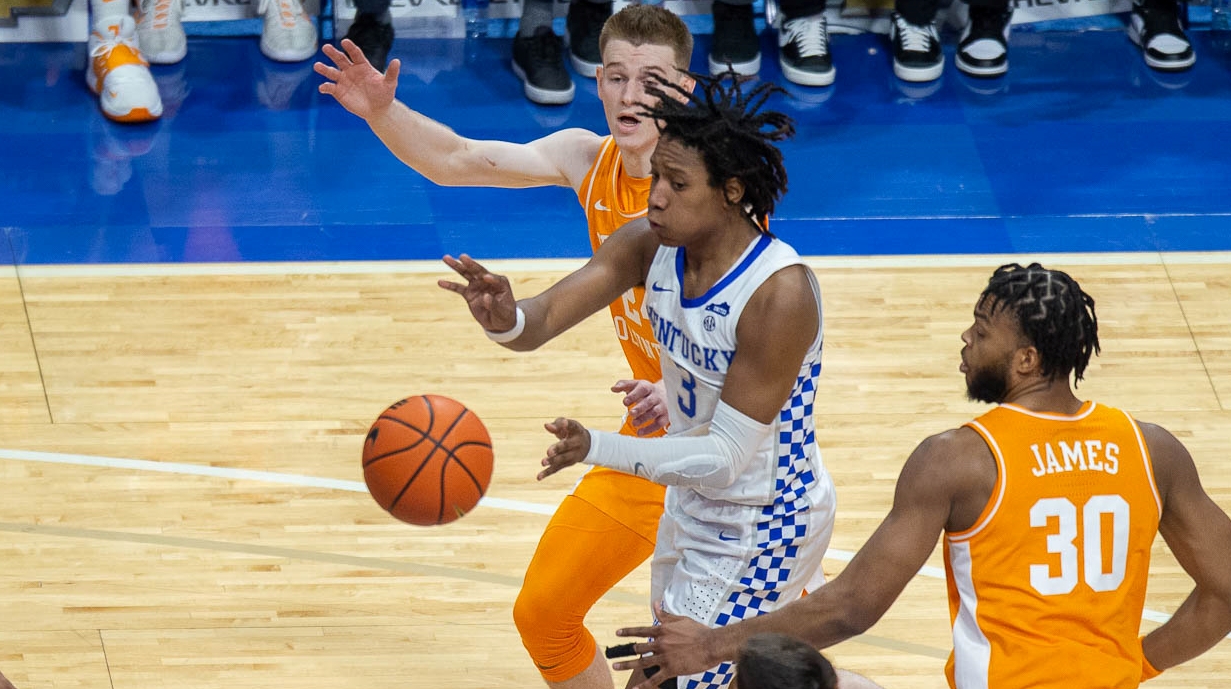 The Kentucky Wildcats hosted the Tennessee Volunteers Saturday at Rupp Arena, after the new broke that former Coach Joe B. Hall had passed earlier in the day. The CATS honored Joe B. with a tribure on the big board prior to the game, and Coach Cal coached with Joe B’s trademark rolled program in hand. Coach Hall’s Banner was also illuminated during the game.

Kentucky went into the half with a 52-36 lead over the Volunteers. Kentucky was led in scoring by TyTY Washington with fourteen points, Kellan Grady with nine points, Sahvir Wheeler with eight points, and Davion Mintz with seven points. Oscar Tshiebwe grabbed eight rebounds in the first half to lead the Wildcats in the rebound column. The Wildcats scored seventeen points off turnovers in the first half. The Wildcats went 22-28 from field goals and 4-6 from three-point field goals, averaging out to 72.7% shooting from the field in the first twenty minutes of regulation.

Kentucky improves to (14-4) on the season with the win against Tennessee. With the win today Kentucky improved to 4-1 in SEC play and improving to 12-0 at home this season. The Wildcats were led in scoring TyTY Washington scoring twenty-eight points, Sahvir Wheeler scoring twenty-one points, Kellan Grady scoring sixteen points, and Davion Mintz scoring ten points. The Wildcats were led in rebounding by Oscar Tshiebwe with a total of twelve rebounds for the game.  The atmosphere in Rupp Arena was unreal with a sold-out crowd and the Wildcats shooting lights out made it even better. The Wildcats went 38-56 (67.9%) from field-goals and 11-18 (61.1%) from three-point field goals. The Wildcats went 20-21 (95.2%) from the free-throw line in today’s game. The 107 points scored is the most points Kentucky has scored vs an AP-Top 25 team since 1994.

Kentucky travels to Texas A&M this Wednesday to take on the Aggies at 8:30 PM.