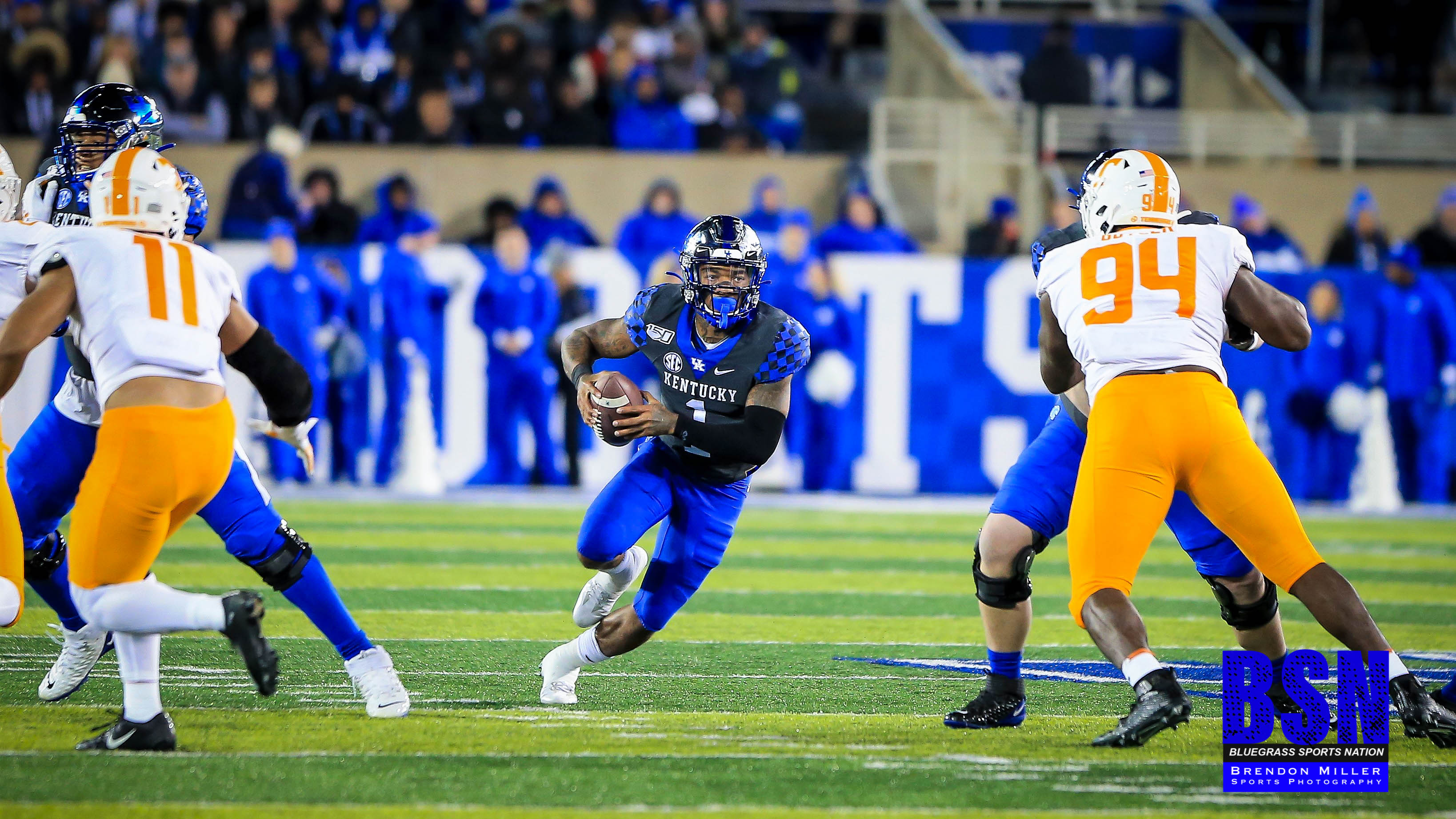 Kentucky’s path to the postseason took a hit with a 17-13 loss to Tennessee Saturday night.

The Wildcats (4-5, 2-5 Southeastern Conference) have to win two of their last three games to reach the postseason for a fourth straight season. The Volunteers (5-5. 3-3) continued their recent surge by winning their fourth game in the last five games after starting the season at 1-4.

Kentucky coach Mark Stoops said the loss was a “difficult pill to swallow.”

“It’s an extremely difficult loss,” Stoops said. “(It was) two teams playing extremely hard and very hungry for a victory and it comes down to a goal-line stand. … We’ve got to find a way to make-up those yards and do a better job.

That big stand for Tennessee came late in the fourth quarter when the Volunteers stopped the Wildcats at the goal line in the final minutes. Lynn Bowden fell short of crossing the end zone short on fourth-and-two with 1:17 remaining, forcing the hosts to turn the ball over on downs.

Bowden made his fourth straight start at quarterback and his 114 rushing yards paced a Kentucky squad that gained 302 of their final 327 total yards on the ground.

Bowden got some support from the backfield as Kavosiey Smoke and Chris Rodriguez combined for 139 yards rushing. A.J. Rose collected 44 yards with Smoke and Rodriguez scoring the team’s two lone touchdowns.

“I think all those guys had some good explosive runs, Stoops said. “All of them have an opportunity to create some big plays. Chris had obviously 6.8 (yards) per carry, he was the guy today, but Kavosiey was averaging 7.2, so each week you can see whoever gets some explosives.”

Kentucky dominated the Volunteers in the opening quarter and raced out to a 13-0 lead. On its first drive, the Wildcats pieced together an impressive 17-play drive that stretched 75 yards in 10:18, capped by a 2-yard run by Rose to give the Wildcats a 7-0 lead.

The hosts punched in another score after Josh Paschal blocked a punt on Tennessee’s first possession. A 22-yard run by Kavosiey Smoke gave Kentucky a 13-0 lead.

“We ripped off some big runs and big chunks (of yardage), but we’ve got to find a way to get the ball into the end zone,” Stoops said. “That’s the bottom line.”

In the second half, it was all Tennessee. The Volunteers scored two twice in the third quarter and used a goal-line stand in the closing minutes to fend off the Wildcats. Kentucky failed to eclipse the goal line after a fumble recovery with 7:44 remaining.

Tennessee did most of its damage through the air and used two quarterbacks to keep the Wildcats off-balance in the secondary. The Volunteers threw for 213 yards, with receiver Marquez Galloway snagging four passes for 103 yards and a touchdown. Josh Palmer added 55 yards on four catches and one touchdowns.

Stoops said the Wildcats failed to match Tennessee’s intensity, especially in the second half.

“It comes down to some 50-50 balls and we knew that going into it,” Stoops said. “We talked about that being their strength and that hurt us tonight. You take away some of those 50-50 catches, with some very, very talented receivers, and you play a pretty solid game. You make that yard, you make a couple plays, you get the ball in the end zone and it’s a much different situation, much different locker room. But it didn’t happen and we got to regroup and get back to work and I’m sure this team will.”

Stoops said the key will be overcoming the disappointment of Saturday’s loss to the Vols. Kentucky ends the season with a home game against Tennessee-Martin Saturday, followed by a road encounter at Vanderbilt and the Wildcats close out the regular-season on Nov. 30 against rival Louisville.

“There’s going to be frustration and they got to control that, because it’s hard, these guys invest a lot,” Stoops said. “When you invest what we invest it’s going to hurt. So we got to handle that as best you can and try to keep the frustration to yourself and regroup and then go look at the film and go look at the things and the areas where we all can do things better. And that’s the only way can you handle it.”