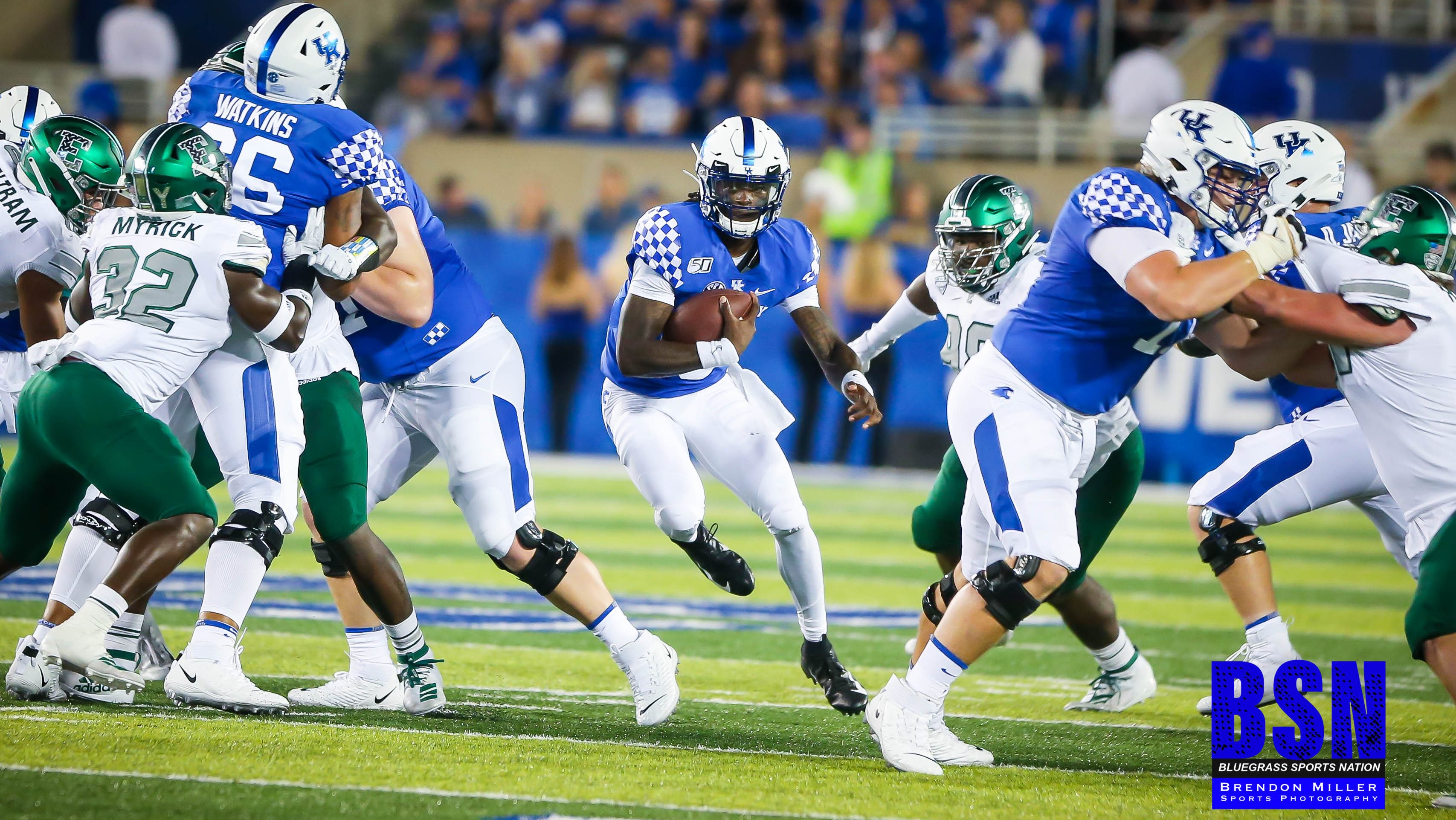 Kentucky and Eastern Michigan squared off tonight at Kroger Field. Each team entered the game with a 1-0 record.

On the next possession, the Eagles were forced to punt in just five-plays. The punt traveled 48-yards, pinning Kentucky on their own 10-yard line. The Cats were able to overcome the poor field position, capping off a six-play 90-yard drive with a 32-yard touchdown run by Kavosiey Smoke. Kentucky led 14-0 with 2:09 left in the opening quarter.

After Eastern Michigan was forced to punt, the Kentucky offense put together a 13-play drive, but a fumble by A.J. Rose gave the Eagles the ball on their own 1-yard line. Eastern Michigan quarterback Mike Glass threw an interception to Jordan Griffin on second down, Griffin went 15-yards on the return. Kentucky took over on the Eastern Michigan 11-yard line. The Eagle defense stood tall, and Kentucky settled for a 40-yard field goal kick by Chance Poore. The Cats led 17-0 with 7:43 remaining in the second quarter.

The Kentucky defense followed by forcing another turnover. This time, it was a deflected pass which was intercepted by Kash Daniel. Daniel’s 18-yard interception return set up the Cats on the Eastern Michigan 30-yard line. The Kentucky offense faltered, and so did Chance Poore as he missed on a field goal attempt from 49-yards with 4:57 remaining in the first half.

Eastern Michigan took advantage, capping off a 10-play, 62-yard drive with a 24-yard field goal by Chad Ryland with 1:52 left in the opening half. The Kentucky offense went three-and-out, giving the Eagles the ball on their own 11-yard line with 1:11 remaining in the half. The Kentucky defense held firm, and at halftime Kentucky led 17-3.

On the next possession, a 38-yard pass from Mike Glass to Arthur Jackson put the Eagles at the Kentucky 26-yard line. The Eagles followed with a 26-yard touchdown pass from Glass to Ryland. Kentucky led 24-10 with 2:15 to play in the third quarter.

On the next possession of the game, Terry Wilson was tackled down by the back of the jersey on a run to the right. A horse-collar penalty was accessed to Eastern Michigan. Wilson was carted off the field, and Sawyer Smith came in at quarterback. Smith’s first career pass as a Wildcat came later in the drive when he connected with Ahmad Wagner on a 54-yard touchdown. It was Wagner’s first career touchdown and was the longest reception of his career. Kentucky led 31-10 with 14:20 remaining in regulation.

The Eagles responded with a 12-play, 75-yard drive, which was capped off by a seven-yard touchdown pass from Glass to Bryson Cannon. Kentucky led the Eagles 31-17 with 10:41 left in regulation.

Kentucky was forced to punt on the following possession. The Eagles put together a 10-play drive, but ultimately turned the ball over on downs. Kentucky added to their lead with a 2-yard touchdown pass from Smith to Bowden with 0:54 left in regulation. Eastern Michigan was able to move the ball into Kentucky territory, but the clock expired before they were able to score.

Kentucky advances to 2-0. Eastern Michigan falls to 1-1. Kentucky’s next game is at home against Florida on September 14th. The game will be broadcasted on ESPN and is scheduled to start 7:00 p.m.