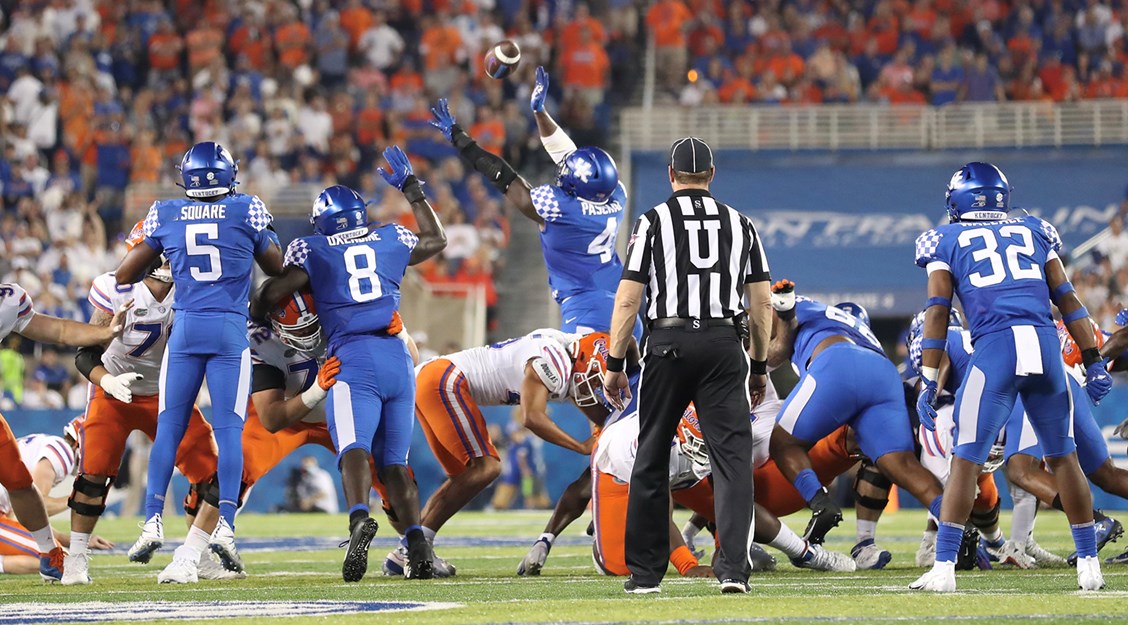 Defense, Special Teams Help Cats Get Over Hump Against Gators

The date was Nov. 15, 1986. It was a cool, blustery day at the facility then known as Commonwealth Stadium. The temperature was in the 40s and Kentucky’s visitors from the south, the Florida Gators, were not enjoying the brisk autumn weather one bit.

That day, Kentucky held on to beat Florida 10-3 behind quarterback Bill Ransdell and running back Marc Logan. The Cats also got a strong defensive effort, keeping the Gators out of the end zone the entire game.

What those in attendance did not know was that Kentucky would not beat Florida in Lexington again until Saturday, when a stout UK defense and a huge special teams play carried UK to a 20-13 win in that same stadium, now known as Kroger Field.

That special teams play came in the third quarter, with Florida looking to extend a 10-7 lead. Jace Christmann lined up for a 48-yard field goal. It would be the play that would chane the course of the game.

On the snap, Kentucky senior Josh Paschal busted through the middle of the Florida line, got into the backfield and got a hand up, blocking Christmann’s attempt. The ball went into the night sky and was plucked out of the air by UK freshman Trevin Wallace who took off down the left sideline.

Wallace had nearly clear sailing in front of the UK bench, picking up a key block from DeAndre Square along the way to a 76-yard touchdown. Wallace became the first UK player in 13 years to return a blocked field goal for a touchdown (David Jones did so against Vanderbilt in 2008).

With that huge play, the Cats took a 13-10 lead, one that they would not relinquish. And thus, the streak of 16 straight losses to Florida in Lexington ended.

UK head coach Mark Stoops has seen Paschal make so many plays during his UK career, yet he continues to be amazed by the senior.

Kentucky would go up 20-10 on a Chris Rodriguez Jr. touchdown with 11:32 to play. But the Gators would not go away without a fight.

Florida would get within 20-13 and would get inside the UK red zone again in the game’s waning seconds. But, as they had done all night, and have done all season, the UK defense made big play after big play. The final one came when UK linebacker Jacquez Jones batted away a fourth-down pass from UF quarterback Emory Jones, ensuring the Kentucky victory with just 18 seconds to play.

Stoops appreciated what his defensive unit was able to do, especially late in the game.

“I thought (defensive coordinator) Brad (White) and the defense played exceptionally hard,” Stoops said. “It was one heck of a stop. To stand up and have seven, eight stops is just amazing.”

Stoops was nearly at a loss for words at the end of the game when talking about his defense.

“I mean, really special. What more can you say?,” Stoops said. “I mean, tonight was special. That was a thing of beauty defensively.”

When Stoops was hired, UK athletic director Mitch Barnhart hoped that the new UK head coach would bring a defensive mentality to the program. He has done that for nine years but over the last two weeks, it has shown up like never before. After shutting down South Carolina last week, the Cats did much the same to a Florida team that had been averaging 36 points per game and that was eighth in the country in total offense prior to Saturday.

While Stoops could have savored the moment for himself, he was most happy for the fans who packed Kroger Field on this night. Those fans had a definite impact on the game, and Stoops was grateful, opening his press conference after the game with a heartfelt thank you to the Big Blue Nation.

“I’d like to start by saying thank you to the BBN. That’s for you,” Stoops said. “They really showed up in a big, big way today and had an impact on the game. They affected the football game in a very positive way. I really can’t thank you enough.”

Stoops could not recall Kroger Field being so loud during his tenure in Lexington.

“No, I can’t remember that (the stadium being so loud),” Stoops said. “I credit our crowd and the home field advantage. I’m happy for the fans.”

As for that Nov. 15, 1986 date, it was certainly a long time ago. The top song in the country was “Amanda” by Boston and the top movie at the box office was “Crocodile Dundee”, starring Australian Paul Hogan. And no one could have guessed that a freshman defensive back at Iowa named Mark Stoops would be the next coach to beat Florida in Lexington.