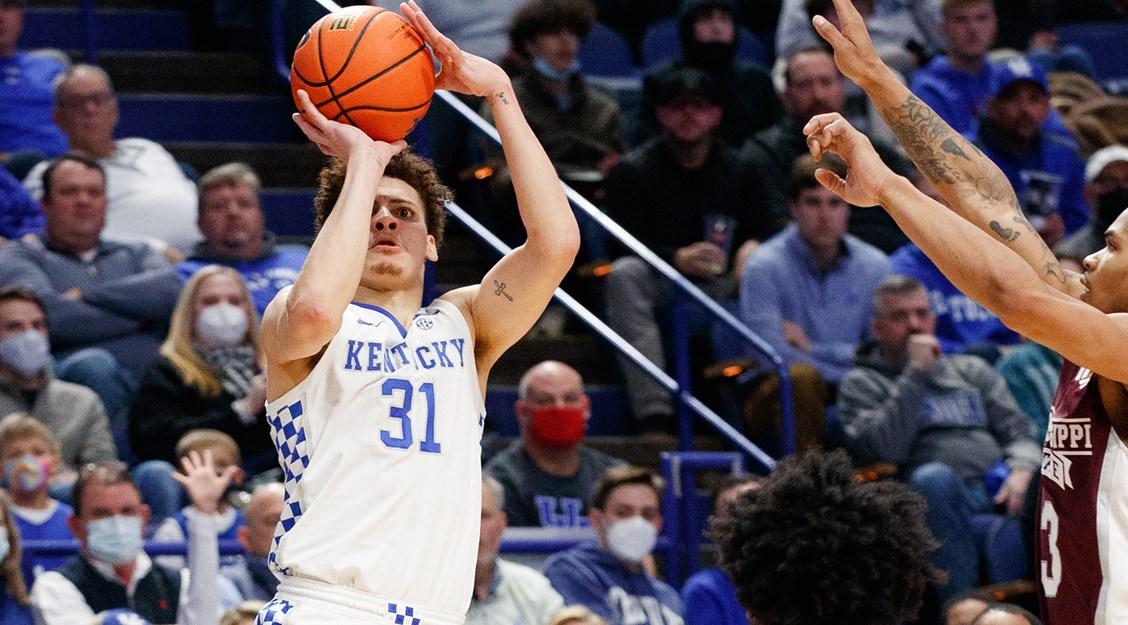 The Kentucky Wildcats hosted the Mississippi State Bulldogs Tuesday Night at Rupp Arena. The Wildcats entered the game (15-4) on the season, coming off a 80-71 loss this past Saturday against the new number one ranked team, the Auburn Tigers. TyTy Washington did not play in Tuesday’s night game, who is currently out with an ankle injury. The Mississippi State Bulldogs came into the game (13-5) on the season, coming off a 78-60 win against Mississippi. The Wildcats came into the game as a nine-point favorite. A lot of rumors were in the air all Tuesday on whether the No.1 prospect Shaedon Sharpe, in the class of 2022 was going to play or not, with TyTy Washington being out and possible limited minutes from Sahvir Wheeler.

Davion Mintz hit a pull-up, mid-range jumper in transition to give the Wildcats an 18-11 lead with 11:45 left to play in the first half. Oscar Tshiebwe had a two-handed slam dunk off a pick and roll assisted by Mintz to give Kentucky a 20-13 lead with 10:22 on the clock, that really felt like the first time the Cats had any momentum on the night. Dontaie Allen had an awesome put-back dunk, off of a missed Kellan Grady field goal, to give Kentucky a 25-13 lead with 7:54 remaining in the half. Dontaie Allen hit a three-point field goal with 1:29 remaining in the half, to give the Cats a 35-22 lead.

Kellan Grady hit a three-point field goal to give the Cats a 45-29 lead with 16:50 left to play. Sahvir Wheeler converted on a left-hand layup in transition to give the Wildcats a 53-38 lead with 12:25 left to play, forcing Mississippi State to call a timeout to try and slow the Cats down on their 6-0 run. Mississippi State slowly edged their way back into the game, tying the game up 74-74 with 2:43 left in regulation. Kellan Grady hit back-to-back three-point field goals to put the Cats up 80-74 with 1:13 remaining in the game. The Cats went on an 8-0 run to end the game to give them the win with a final score of 82-73.

The Wildcats improve to (16-4) on the season with the 82-74 win tonight and improve to (6-2) on the season in SEC play. Kentucky was led in scoring tonight by Oscar Tshiebwe with twenty-one points, Kellan Grady with eighteen points, Sahvir Wheeler with fifteen points, and Keion Brooks with twelve points. Oscar Tshiebwe led the Wildcats in rebounding, ending the game with twenty-two rebounds. Kentucky gets back in action this coming Saturday on the road at Kansas, looking to upset the number five ranked Jayhawks. However, the Cats are (2-3) on the road this season and are looking to pick up a win.