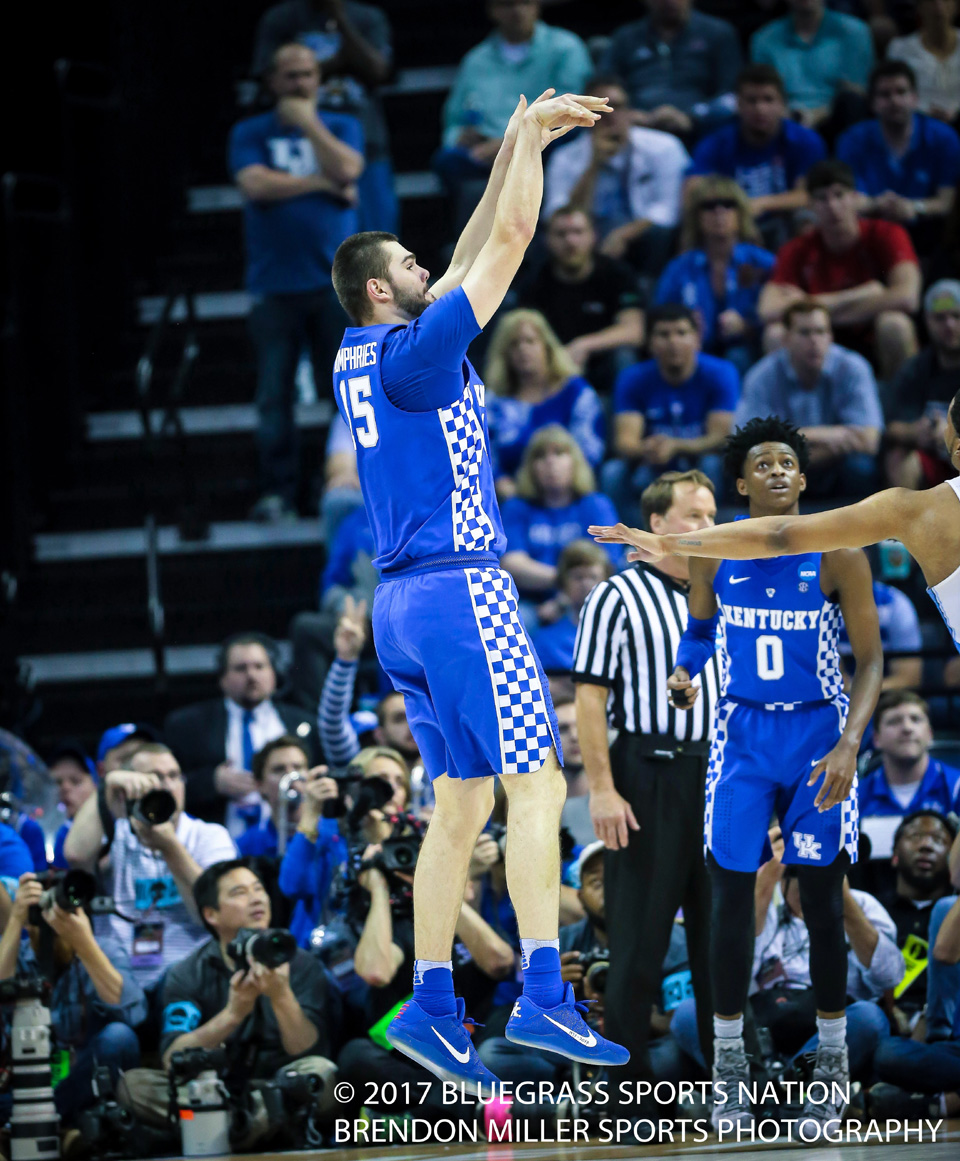 Humphries with the jumper – Photo by Brendon MIller

The Kentucky Wildcats season ended Sunday night at the hands of the North Carolina Tarheels. Carolina led for all but 3:57 of the game but in the last 50 seconds, Kentucky erased a 7 point deficit to tie the game at 73 with only nine seconds to play.  Malik Monk rose up from the top of the key, with two defenders in his face, to drill an off balance three to tie the game.

UNC wasted no time, drove the length of the floor where sophomore Luke Maye sank a long 2 point basket with only 0.3 seconds left to go to put the ‘Heels up for good 75-73.  The Cats called final play was a turnover giving the ball back to the ‘Heels to seal the win.

Going back to the first half, De’Aaron Fox only played 8 minutes picking up two quick fouls.  That gave way for Senior Dominique Hawkins to come into the game and step up to make some big baskets and 10 points in the first half.  At the half, Kentucky’s shooting went cold and the Cats only made 1 of their last 10 to go into the half but still only trailed by 5, 33-38.

The second half started when UK came out on a big run to take the first lead of the game with 17:32 to play 39-38 but was only able to hold that lead for 18 seconds before the ‘Heels claimed it back.  Carolina led the next ten minutes of the game until Isaac Humphries came on like a light switch and made a layup to cut the lead to one at 57-56.  Humprhies went on to score UK’s next 8 points and put the Cats up by five at 69-64 with 5:10 to play.  Unfortunately, Kentucky couldn’t buy a basket over the next 4:21 while UNC went on a 12-0 run and extended the lead 71-64 with less than a minute to play.

De’Aaron Fox made a 3 with 0:49 seconds to play to cut the lead to 4.  The Cats stepped up the defense and forced a five second call  on the inbounds.  Malik Monk made a quick 3 pointer to cut the lead to 1.  With UK’s pressure on the ball, UNC’s Justin Jackson slipped past the defense and scored an easy layup to put the ‘Heels up by 3 with 34 seconds to go in the game.

That’s when Monk made his last points of the year on the contested three with only 9 seconds to play.  The Cats had fought back and had the momentum on their side.  UK fans went crazy!  But with 0.3 seconds to go, Luke Maye sank the 2 that gave UNC the lead and eventually the win, and him the MVP of the Region.

After the game, Cal said, “You know it’s amazing when they practically fouled out my team.  Amazing that we had a chance.  So proud of how these guys fought.  So proud of Isaac.”

Leading scorers for the Cats were:

Isaac Humphries – 12 pts. (career high) , 5 rebounds, 1 assist
The Cats end their season at 32-6 and another Elite 8 under Coach John Calipari making that 6 in just 8 seasons in Lexington with an overall record of 249-53.  Though Cat fans know he can’t win them all, we’d sure like for him to.  Let the countdown to Big Blue Madness 2016 begin.