CATS Get Kicked on Rocky Top 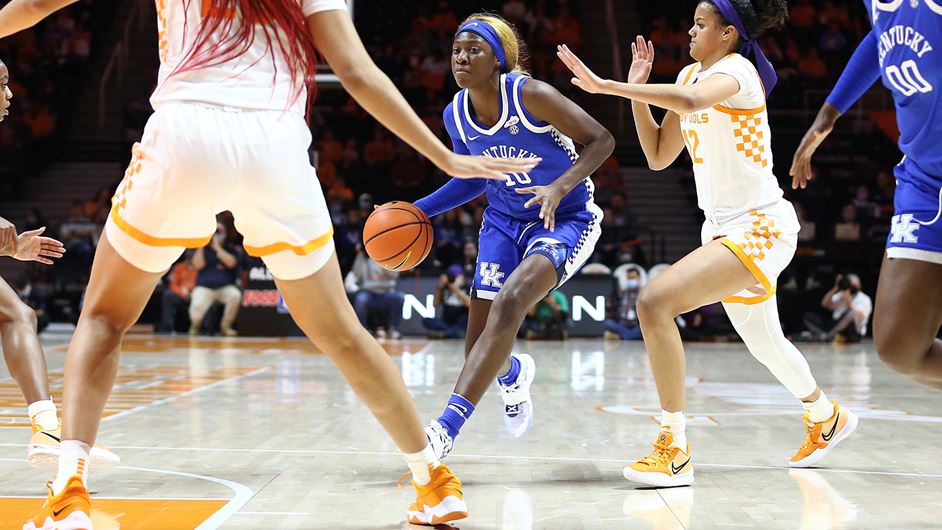 Lady Vols pay back Kentucky with Rout of Wildcats

Howard made 11 of 21 from the floor, including one of four from behind the arc, and one of two at the line. She added five rebounds, four steals, three assists and a blocked shot.

Jazmine Massengill was the only other UK player in double figures, scoring 13 points.

Kentucky (8-5, 1-2 SEC) scored first in the game on a driving basket by Treasure Hunt. From there, the game was tied at two, four and six before the Lady Vols took a 9-8 lead on a Tess Darby three-pointer. Kentucky responded with a layup from Massengill and a Howard three, taking a 13-9 lead with 4:08 to play in the first quarter.

From there, it was almost three minutes until anyone scored. Howard broke the drought with a basket to give the Cats a 15-9 advantage. Tennessee would get a basket inside the final minute but UK freshman Jada Walker scored as the horn blew, giving UK a 17-11 lead after one period.

Tennessee (17-1, 6-0) got it going early in the second period. The Lady Vols went on an 11-2 run at the beginning of the period, keyed by a pair of threes from Rae Burrell, to take a 22-19 lead. Kentucky fought back with consecutive baskets from Dre’una Edwards and Howard to lead 23-22 with 5:18 to go in the half.

But the Lady Vols went on a big run late in the half. Tennessee assembled a 14-2 run to turn a one-point deficit into an 11-point lead. Kentucky stopped the run on a basket from Massengill, but the Lady Vols got a Jordan Horston layup just before the half to take a 38-27 lead into the break.

Tennessee would respond with yet another one, this one a 10-2 streak, to take a 64-43 lead into the final stanza.

In the fourth, UT would build the lead to as many as 31 before settling for a 26-point win.

Kentucky returns to action on Thursday, hosting Florida at Memorial Coliseum. Tipoff is set for 7 p.m. ET and the game can be seen on the SEC Network.