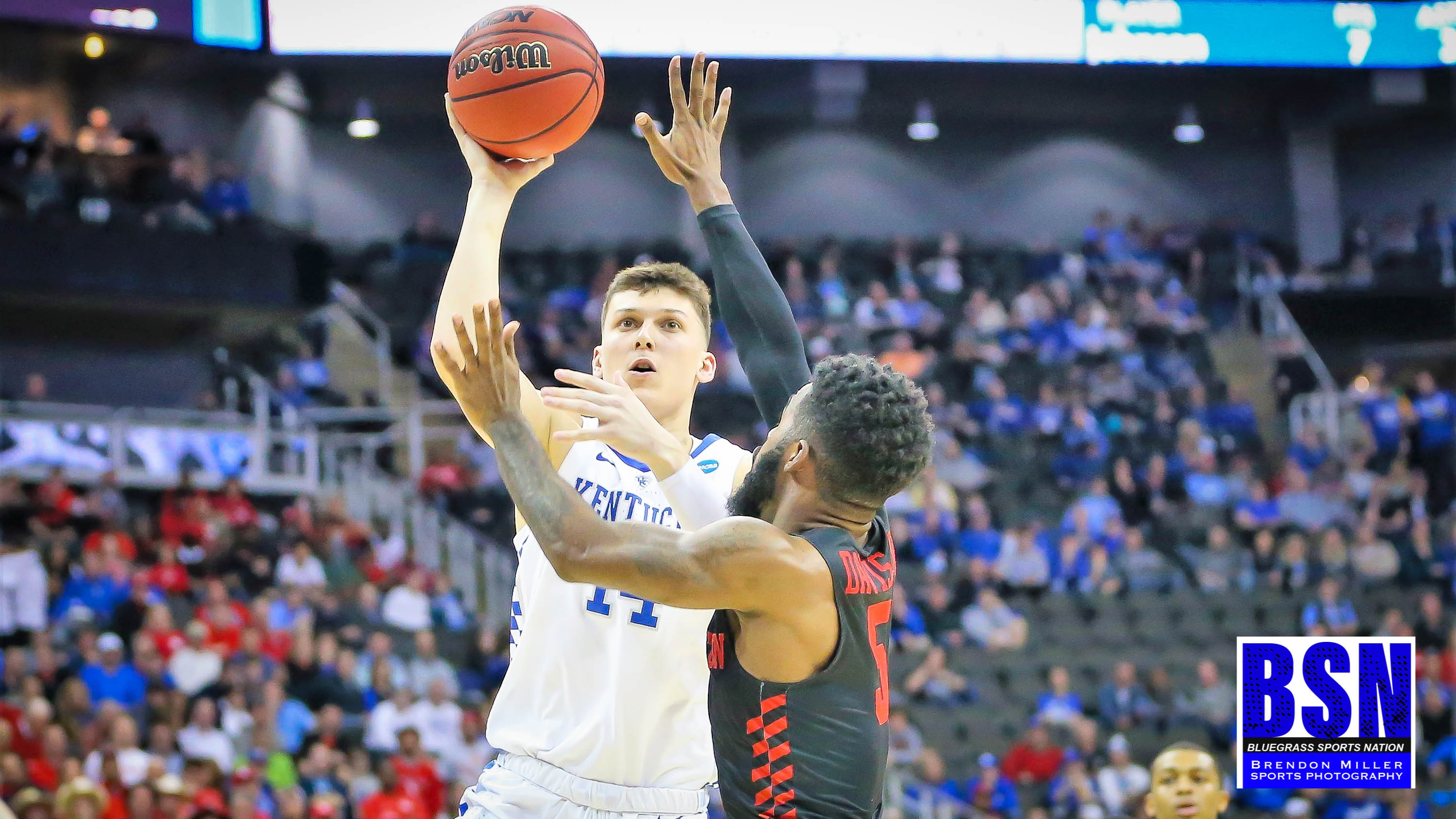 Tyler Herro leads the CATS with Nineteen points, and three rebounds.  Washington returns coming off the bench finishing the game with sixteen points.

The past week has left the Big Blue Nation with many questions entering tonight’s contest with Houston in the Sweet 16. The Biggest Question mark for the CATS centered around PJ Washington, and almost everyone has voiced their opinion on the matter.  On Wednesday, Washington Tweeted a video with the cast off and walking around with game gear on.  The video was later retweeted by Coach Calipari and the Big Blue Nation was left confused again.  Washington was seen shooting in the team shoot around and today the Big Blue Nation was overwhelmed with excitement when PJ checked into the game.

Kentucky and Houston opened the game trading baskets and pushing the tempo.  Washington entered the game with 15:41 remaining in the first and Kentucky trailed seven to six.  Washington was fed the ball in the post and scored on his first attempt.  The Big Blue fans erupted and the C- A- T- S chant rang through out the arena.  Kentucky played with confidence and began an unanswered run.  In the first half, Washington contributed with eight points.  Washington was a spark off the bench and was glue that Kentucky needed to set the tone for the game.

The Cats playing to a sea of Blue could feel the excitement of the Arena.  The CATS were making three- point baskets and controlling the boards.  Reid Travis continued another stellar game with four points and five rebounds in the first half.  The CATS held the hot shooting Houston Cougars team in check as the team went one for six from the three-point line and Kentucky controlled the paint with an eighteen to seven rebounding margin in the first half.  Just before the Half, Kentucky was in control of the game and led Houston with a game high thirteen points lead.  As time expired going into intermission Houston Dejon Jarreau scored two points at the buzzer.  At the half Kentucky led Houston 37-26.

Houston opened the second half with a five to two run.  Kentucky led by ten points during the first couple of minutes in the second half with the team trading baskets.  The game stayed at a comfortable seven to ten point lead for the next few possessions.  Kentucky relied on Reid Travis, Keldon Johnson, and Tyler Herro to carry the scoring load.  When Houston’s Brooks made a corner three point shot with 10:54 remaining in the game, the UK lead was cut from seven to four points.  The Big Blue Nation fans began to sense the game was slipping away and urged the CATS to finish the game strong. Houston continued to cut into the lead and Kentucky lost their composure turning the ball over and missing free throws.

Houston’s Brooks made another three point basket and the Cougars inched closer cutting the lead to two points.  Kentucky 47- Houston 45 with 5:59 remained in the game.  PJ Washington made a field goal and the CATS led by three points, until Brooks connected with another made three point basket and tied the game at 49 with 4:24 remaining in the game.  Houston fans who had been quiet throughout much of the game were now on their feet and excited, Kentucky fans were hoping the CATS would avoid a historic collapse.  The momentum continued for the Cougars as Corey Davis Jr. continued the steak scoring two points and the Cougars led 51- 49.  Washington tied the game at 51 with two made free throws, and Brooks then made another three point basket.

The CATS responded with a four to zero run and regained the lead when Ashton Hagans made two free throws.  The Cougars continued to fight and regained a three point lead at 58-55 with under two minutes to go.  The CATS respond with Washington two made free throws.  After the CATS stop the Cougars from scoring, Herro made a heroic three point shot, and the Kentucky fans went into pandemonium.  The CATS again stopped the Cougars from Scoring and Tyler Herro knocked down two free throws, sending Kentucky to the Elite Eight with a 62-58 victory over the Houston Cougars.

Tyler Herro led the CATS in scoring with 19 points and will be remembered for his gutsy performance and leading the CATS to a victory in the closing minutes.  Washington returned to the lineup and was the spark Kentucky needed finishing the game with 16 points and two rebounds.  Others scoring for Kentucky included Reid Travis with 6; E.J, Montgomery 2; Ashton Hagans 4; Keldon Johnson 7;, Immanuel Quickly 6; and Nick Richards 2.

Houston was led in scoring by Armoni Brooks finishing the game with twenty points and going six for twelve from behind the arc.  Corey Davis, Jr. finished with fourteen points and Galen Robinson JR. finished with ten points.  Others scoring for Houston included Fabian White with three points, Nate Hinton with two points, and Dejon Jarreau with nine points.

Kentucky moves onto the Elite Eight facing the SEC foe Auburn Tigers.  The match up will be the third time the CATS face the Tigers and Kentucky is previously two and zero against them.  The Tigers are playing their best basketball and peaking with eleven consecutive wins.  Auburn dominated the North Carolina Tar heels with a seventeen-point victory in the Sweet Sixteen.  The status of Chuma Okeke is still unknown as the talented Forward left the North Carolina game with a gruesome leg injury.