CATS Keep the Cup in Lexington 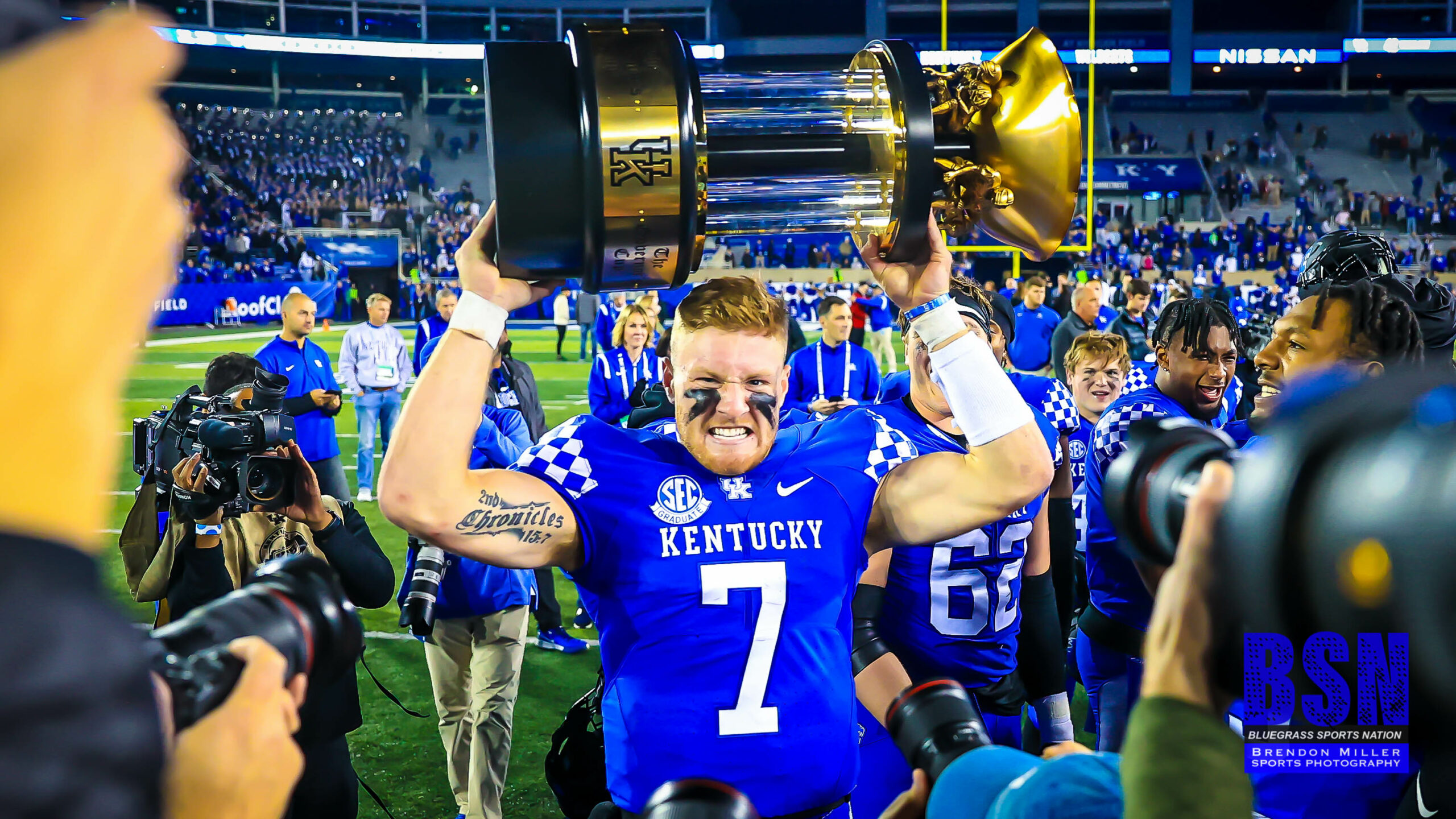 Kentucky Football finished out the regular season hosting intra-state rivals the Louisville Cardinals in the Battle for the Governor’s Cup. Today’s game also marked Senior Day and UK had a pre-game celebration with each Senior recognized with their families in the Kentucky locker room endzone. Kentucky retains the Governor’s Cup with a hard earned 26-13 victory to run their record to 7-5 on the season and await a bowl invitation.

In today’s game, Kentucky was impressive in several key areas. The Kentucky kicking game has struggled throughout the season, but today Matt Ruffolo went 4-4 splitting the uprights with successful FG attempts of 43 yards, 39 yards, 35 yards, and 40 yards. Ruffolo’s performance broke a personal best for made FG’s and earned him Most Valuable Player of the game.

Defensively Kentucky was solid forcing three turnovers including two interceptions, and one fumble recovery. The defense was also great on third downs, holding Louisville to four out of twelve on third down. Will Levis had another great game passing for 188 yards with two passing touchdowns and no interceptions. Levis was phenomenal in the first quarter passing for 120 yards and a touchdown. Even though Levis only passed for 63 yards the rest of the game, he played his best game in several weeks.

Chris Rodriguez was impressive in rushing for 120 yards. Rodriguez’s performance made him the program’s all-time leader in 100-yard rushing games with 20, surpassing the great Benny Snell with his performance.

1st Quarter – Kentucky was impressive in the first quarter and put seven points on the board. On Kentucky’s opening offensive possession, the CATS had success moving the ball. Levis passed to WR Josh Kattus for a gain of 70 yards. The next play Rodriguez had his best run of the first half with an 11 yard gain and placed the ball inside the 10 yard line. Kentucky finished the drive with a Levis eight yard passing Touchdown to Dante Key. Levis had his best passing quarter in several games passing for 125 yards. Defensively, Kentucky was superb stopping the Cards on fourth down to get the ball in good field position. At the end of the first quarter Kentucky led Louisville 7-0.

2nd Quarter – Kentucky added to the lead in second quarter with a pair of made FG by the kicker Matt Ruffolo. Ruffolo converted on successful attempts of forty-three yards and twenty-nine yards. On Kentucky’s opening drive of the quarter, Ruffolo split the uprights with his first kick connecting on a forty- three- yard FG. On Louisville’s opening possession of the Quarter the Kentucky defense come up huge forcing a QB Fumble with the ball was recovered by Outside Line Backer JJ Weaver at the Louisville 39 yard line. Kentucky was unsuccessful moving the ball on this drive, resulting in another FG attempt by Ruffolo. Ruffolo’s attempt of 39 yards was good, giving Kentucky a 13-0 lead. Louisville had one drive in the second quarter resulting in points on the board. Malik Cunningham, who is normally the Cards starting QB, did not start the game. Once inserted into the lineup, Cunningham along with Running Back Jawhar Jordan, made the CATS pay picking up several first downs with his legs. Louisville finished the drive with a six-yard rushing Touchdown, and the Cards completed a twelve play 64 yard drive. At intermission Kentucky led Louisville 13-7.

3rd Quarter – Kentucky continued to build on the momentum created in the first half. Louisville got the ball on the opening possession and the Wildcat defense held strong forcing the Cards to go three and out resulting in a punt. Levis Found Brown for a 21 yard gain, Brown crossed midfield and placed the ball in in good field position. Kentucky was unable to move the ball on the next series, resulting in another FG attempt by Ruffolo. Ruffolo converted a 35 yard field goal, his third made FG of the game and Kentucky led Louisville 16-7. On Louisville’s next offensive possession, Kentucky’s Trevin Wallace intercepted a Cunningham pass and Wallace returned the ball back to the 19 yard line, before getting tackled. Kentucky completed the drive with another Levis Passing Touchdown throwing to Barion Brown for a three-yard touchdown. End of the third quarter Kentucky led Louisville 23-7.

4th Quarter – Ruffolo added to the lead with a 40 yard FG completing a twelve play 60 yard drive. Louisville had struggled to move the ball for most of the game but did find the endzone once in the quarter with a 27 yard passing Touchdown from QB Brock Domann to Tyler Hudson. Louisville trailed by 13 points and went for the two-point conversion but was unsuccessful on the attempt and the score remained Kentucky 26- Louisville 13. Later, in the quarter Rodriguez had his best run of the second half with a 20 yard gain putting him over 100 yards rushing in the game. Kentucky was unable to score again during the game, and Louisville had one last chance to cut into the lead and put points on the board. The Louisville offense began to have success moving the ball, until Jordan Lovett intercepted a pass from Domann to Hudson. The game ended with Kentucky prevailing with a hard fought 26-13 victory over the Louisville Cardinals.

Kentucky finished the regular season with an overall record of seven wins and five loses. Kentucky retains possession of the Governor’s Cup and has won the intra-state battle of Kentucky five out of the last six years. Now that the season is over with Kentucky awaits who they will play in the upcoming bowl season.