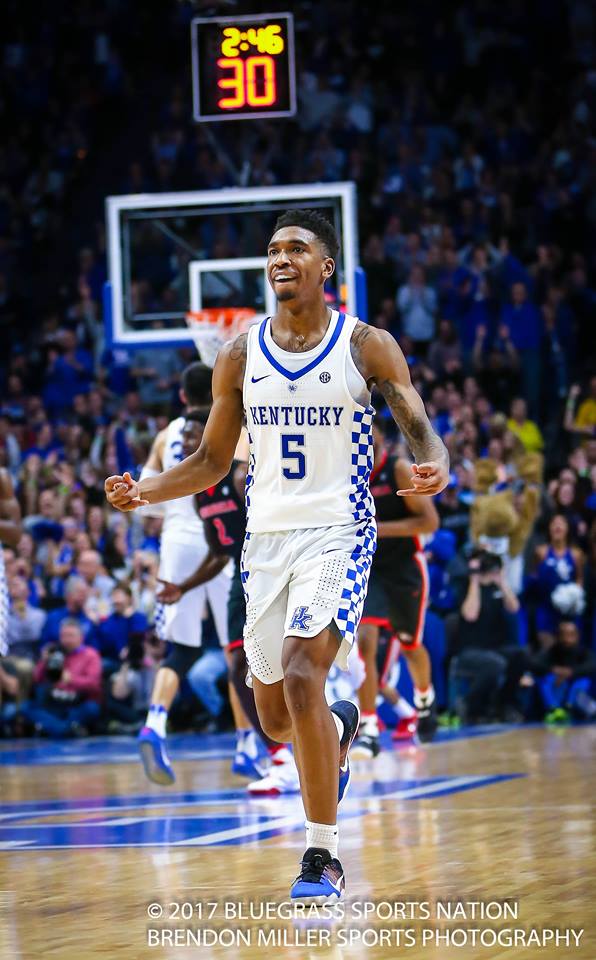 After two straight losses, the Kentucky Wildcats beat the Georgia Bulldogs Tuesday night 90-81 in an overtime thriller in Rupp Arena.  The Cats had never lost three straight under coach John Calipari but the odds were against them before the game even started.  Kentucky’s starting point guard, De’Aaron Fox began getting sick Monday at practice and didn’t even make it to the arena.  Sacha Killyea-Jones left the arena after he was feeling sick also, according to Coach Cal.  And Mychal Mulder missed his fourth straight game, also due to illness.  “This flu that’s going around, we’re trying to sanitize and do some stuff to make sure it doesn’t go through the whole team.” Said Cal during his post game press conference.

Kentucky started the lineup of Isaiah Briscoe, Derek Willis, Malik Monk, Isaac Humphries and Bam Adebayo for the first time this season.  Georgia came out hot and scored the first 12 points of the game in just 3:11.  Cal quickly called a timeout to change up what they were doing and change personnel.    Gabriel came in off of the bench and scored the Cats first points after three

minutes and twenty nine seconds of play.  Kentucky only shot 29% from the field the first half but battled back to tie the game at 29 after being down as much as 14 points.

Bam had 2 fouls early in the first half, which forced Tai Wynyard off of the bench for much of the first half.  Tai played well despite not scoring any points and it was a great learning opportunity for him for games to come.

Coming out of the half, UK took it’s first lead of the game at 33-31 when Briscoe made a layup with 18:16 to play.  Malik Monk then took over the game hitting four straight three pointers and forcing Georgia to call a timeout.  Kentucky pulled out to an eight point lead and Monk could not be stopped.  Cal said, “We put him on the baseline and told him to just make a play.” Georgia would not go away and came back to tie the game at 70-70 with 3:47 left to play.  Out of a timeout with eight seconds to go, Malik Monk hit a long two to tie the game at 76.  Georgia had a good look on the other end, the rebound came to Dominique Hawkins who put up a half court shot that just barely missed and the game went into overtime.

In overtime, the Cats started pulling away winning 90-81 as Juwan Parker and J.J. Frazier both fouled out of the game.

Monk led Kentucky with 37 points and hit 7 of 11 three pointers on the night.  Briscoe finished two assists shy of his second triple double of the year with 23 points, 11 rebounds, and 8 assists.  The cats had never lost three games in a row under Coach Calipari and although this game got off to a rough start, Cal’s coaching and the hard play of the entire team led to Kentucky’s 18th win of the season.

Kentucky’s next game is Saturday at Florida.  ESPN’s College Gameday will be there and the Rowdy Reptiles will be ready when the Cats come calling.  If De’Aaron Fox doesn’t play, look for another close game for the Cats on Saturday.  Let’s just hope this flu doesn’t hit anyone else.