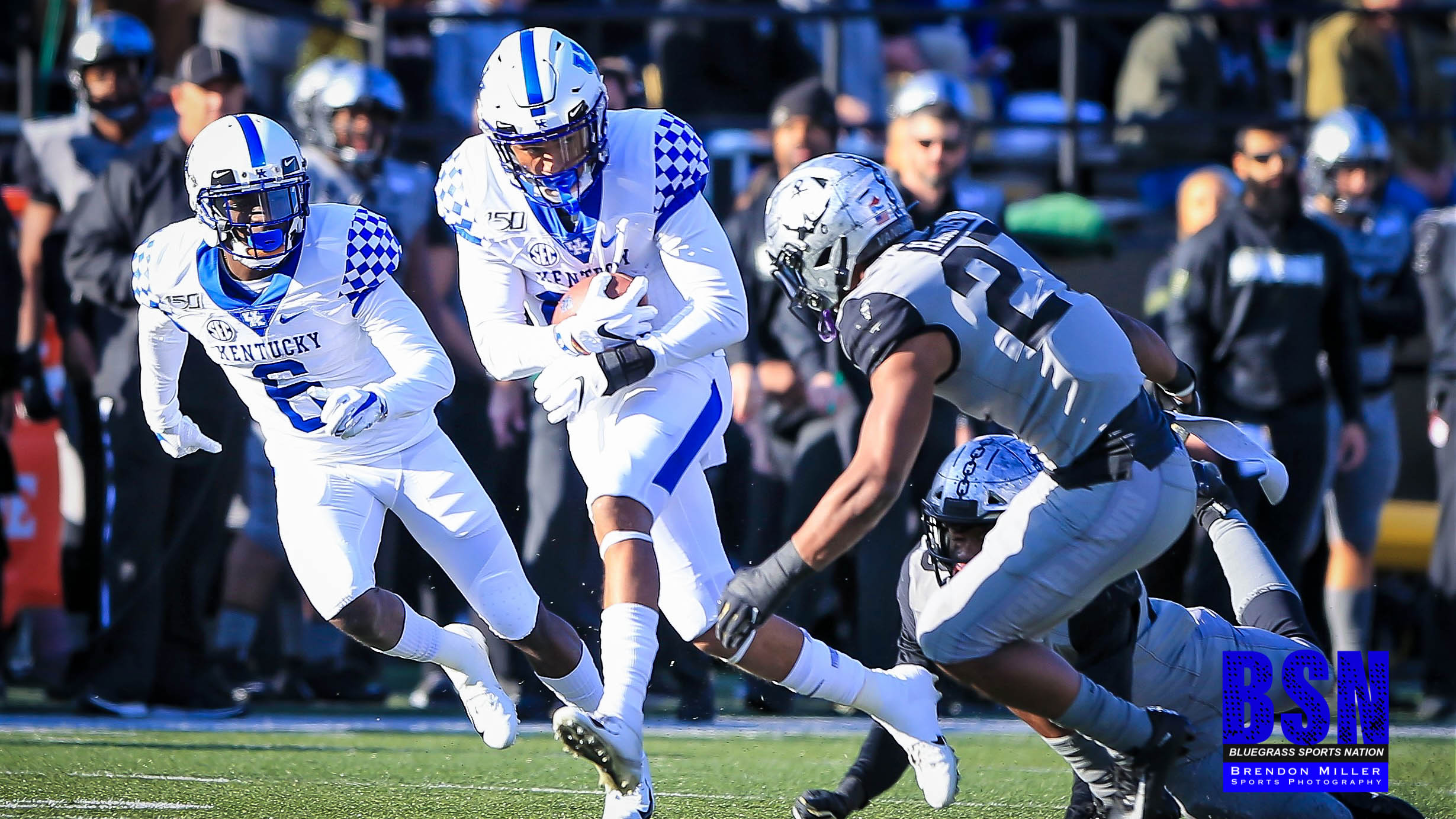 On Saturday afternoon, the Kentucky Wildcats traveled to Nashville, Tennessee, to square off against the Vanderbilt Commodores. Kentucky was led to victory by their rushing game which featured Lynn Bowden’s fourth 100+ yard rushing night. Kentucky had three players rush for 95 yards or more (Chris Rodriguez, Lynn Bowden, and Kavosiey Smoke). Rodriguez and Smoke both had career-highs in rushing yards.

The Wildcats fell just 45 yards shy of breaking the school record for rushing yards in a game. The current record is 446 yards which took place against Tennessee Tech in 1951.

Game Summary:
Despite UK playing relatively well in the first quarter, the Commodores had a 14-3 lead after the first quarter due to a sustained offensive drive and defensive touchdown. But, the Cats never waivered and took a 24-14 lead into halftime.

Kentucky set the tone in the second half by scoring on the opening drive of the third quarter. The Cats put together a 6-play, 75-yard drive capped off by a two-yard touchdown run by Lynn Bowden, Jr.

Vanderbilt threw an interception on the following drive allowing Kentucky to go on a nearly seven-minute drive which covered 72 yards on 11 plays and resulted in a touchdown. It was Chris Rodriguez who did the honors with his second rushing touchdown of the night, which came off a 27-yard run to give the Cats a 38-14 lead with 3:51 remaining in the third quarter.

Rodriguez’s last touchdown was the final score of the game, as the Cats rolled to a 38-14 victory over the Commodores.

With the victory, the Cats are now (5-5, 3-5 SEC) which puts them in great position to become bowl-eligible.

Team Notes:
The Cats are 5-1 this season when leading after the third quarter.

Mark Stoops’ now has 41 victories at Kentucky, tying him with Blanton Collier and Jerry Claiborne.

Kentucky has a 16-16 SEC record over the past four seasons. It is the first time since 1953-1956 that the Wildcats have won at least half of their conference games over a four-year stretch.

The Cats have allowed 34 points or less in 24 straight games, the longest active streak in the nation.

Kentucky had a season-high 528 yards of total offense, their best since compiling 601 yards at Louisville last season.

The Cats had 30 first downs, their most since getting 30 against Mississippi State in 2015.

Kentucky allowed 198 total yards to Vanderbilt, the fifth consecutive SEC game that UK has limited the opponent to 305 yards or fewer. The last time UK had such a streak was in 1977.

The Cats did not give up a touchdown pass. UK entered the game tied for third among FBS teams with the fewest touchdown passes allowed, six.

Vanderbilt’s longest pass play was 22 yards. UK entered the game tied for third among FBS teams of fewest pass plays of 40 yards allowed (one this season).

UK now leads the series against Vanderbilt, 46-42-4, having won the last four games.

Player Notes:
Lynn Bowden threw for a career-high 104 yards, while also rushing for 110 yards on 17 carries. Bowden had a throwing touchdown and a rushing touchdown.

A.J. Rose rushed for 67-yards on four carries. With that performance, Rose now moves to 33rd on the UK’s all-time rushing list.

What’s Next:
Kentucky’s next game is on Saturday, Nov. 23, at home to UT Martin. The game is scheduled to begin at 3:30 p.m. and will air on the SEC Network.