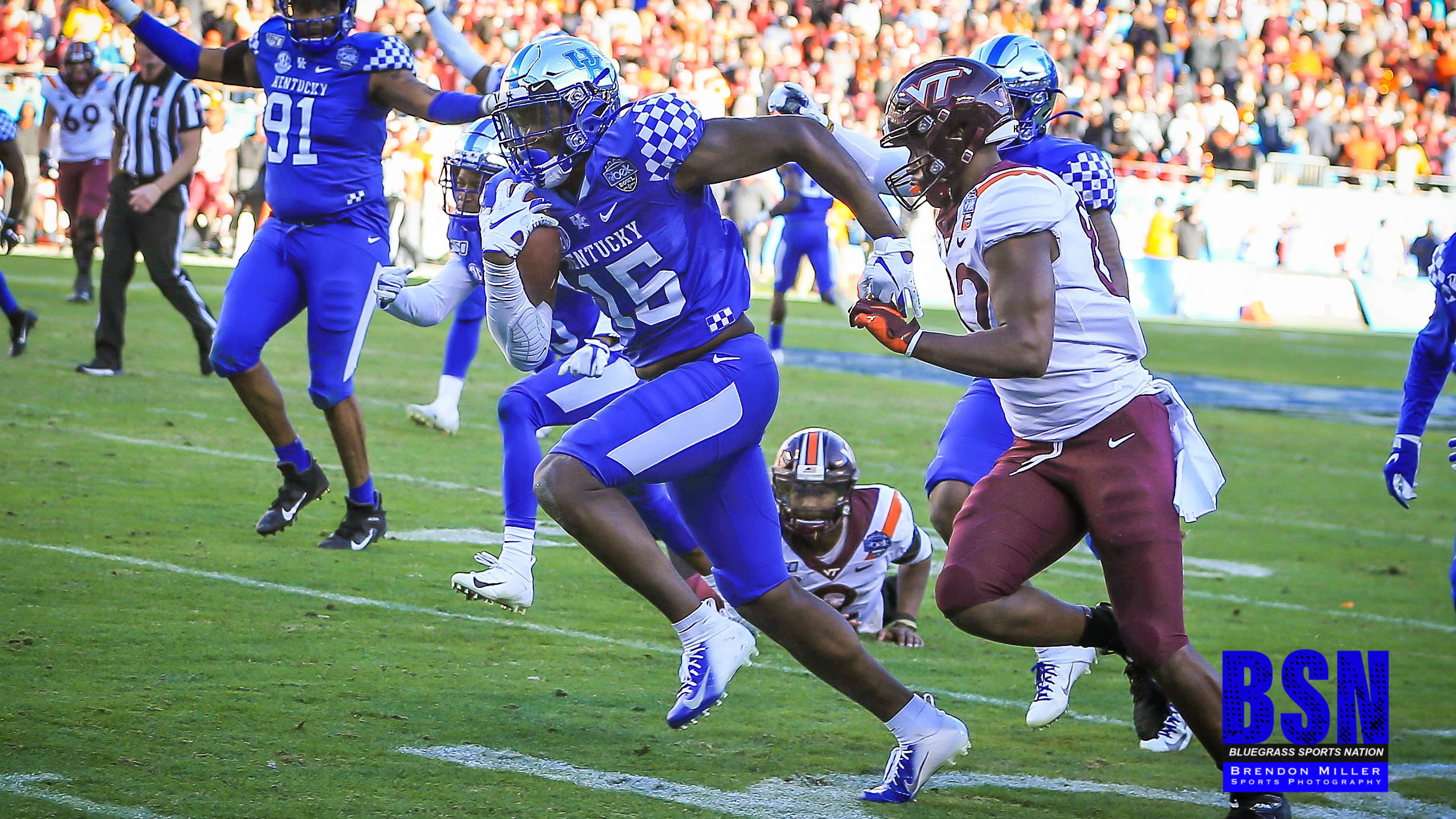 The Cats fell behind early, trailing 17-7 with 10:20 to play in the first half. However, the Cats were able to chip into the Hokie lead with a two-yard touchdown run by Chris Rodriguez with 53 seconds remaining in the second quarter. Rodriguez’s touchdown run came on an eight-play, 64-yard drive that lasted just over four minutes. That made the score 17-14 after the first half.

The Cats tied the game on the opening drive of the third quarter, thanks to a 40-yard field goal by Matt Ruffolo. However, the Hokies answered back on the following possession with a touchdown drive which was capped off by a 43-yard run by Deshawn McClease to make the score 24-17 in favor of the Hokies.

On the ensuing possession, Lynn Bowden scored on a 61-yard touchdown run to tie the game, 24-24. The Hokies responded with a 40-yard field goal by Brian Johnson. The Cats would fumble on their next possession setting up the Hokies at the UK 39-yard line. Virginia Tech worked their way into the red zone and found themselves facing a 4th and 3 from the Kentucky 9-yard line with under 13 minutes to go in the game. The Hokies decided to kick the field goal making the score 30-24.

When asked about that decision, Virginia Tech head coach Justin Fuente said, “There’s so much time left, you know. I don’t know what time of possession was after that. I feel like they had the ball most of the time. So yeah, I thought about it. Felt like there was so much time left in the game that we kicked it.”

Kentucky turned the ball over on the following possession via an interception, but the Hokie offense went three-and-out. The Kentucky offense took over at the Virginia Tech 15-yard line with 8:25 to play in the game.

The Kentucky offense came through for BBN as they put together an 18-play, 85-yard drive which resulted in a 13-yard touchdown pass from Lynn Bowden to Josh Ali with 15 seconds to play in the game. Matt Ruffolo converted on the extra point attempt giving the Cats a 31-30 lead.

The first two plays for the Hokies resulted in incompletions. On the final play of the game, Virginia Tech fumbled the ball and Kentucky’s Jordan Wright recovered the fumble and took it 28 yards to the house for a UK touchdown.

After the game, Coach Stoops had this to say about his team, “I love this football team, our players, their fight and their determination, and once again, just greatly appreciate our staff for what they’ve done.”

Lynn Bowden is a phenomenal football player. Bowden finished the game with 34 carriers for 233 rushing yards and two touchdowns while going 6-of-12 through the air for 73 yards, one touchdown, and one interception.

After the game, Bowden gave a passionate speech on the podium and gave high-fives to fans who made the trip to Charlotte. At the postgame press conference, Bowden was asked why he showed BBN so much love, to which he replied, “The fans, they drove a long way from Kentucky. So, they coming down here to support us, you know, I’ve got to show my love for them just as they love me. I wouldn’t feel right if I just left, especially my last game. I want to make sure everybody feel love from me.”

Kash Daniel tallied eight total tackles in his final game as a Wildcat.

Kentucky football has finally made it. The Cats have established themselves as a high-caliber program that is trending upwards. Between this season and last season, the Cats are (18-8, 8-8 SEC) while also owning a (12-3) record in home games. In that times, UK has victories over Florida, Penn State, Mississippi State, South Carolina, Missouri (2), Virginia Tech, Arkansas, and two blowout victories over the Louisville Cardinals.

That is an incredible two-year run. Let’s not forget the less than ideal history of this program and where this program was when Stoops took control. Keep in mind that UK went (4-20, 0-16 SEC) between Joker Phillips’ last year in charge of the program and Mark Stoops’ first year in control.

Ultimately, this is a new era of UK football. After the game, Mitch Barnhart said it the best, “We used to, I think, hope we would win, but now we’re finding ways to say we sort of expect to win. We’re going to find a way to grit one out.” Barnhart went on to acknowledge that some of the games that the Cats have won recently have been in convincing fashion.

Mark Stoops and the Cats have something special going on in Lexington and I am excited to see the future of Kentucky football.