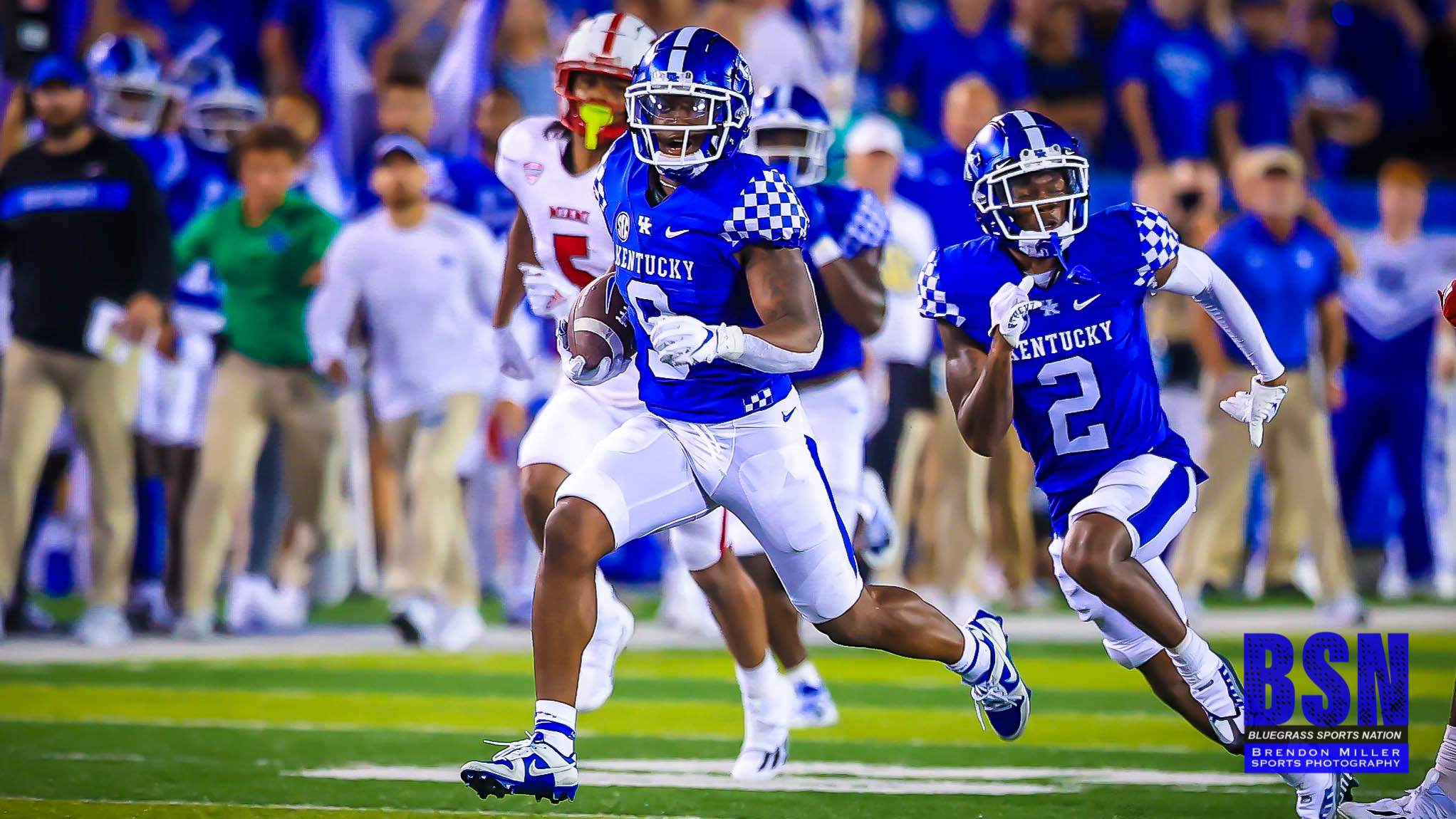 Kentucky wasn’t very polished in the first half of the game, as the New offensive line was getting beat and allowed Levis to either get sacked or rushed in the pocket.  Kentucky had a narrow three-point lead at the half Kentucky 13- Miami of Ohio 10.  In the Second half Kentucky looked like a different team being more focused and sharper in all areas of the game, Offense, Defense, and Special Teams.  Kentucky quickly established a comfortable lead and put the game out of reach in the second half with an explosive 100-yard kickoff return by Barion Brown, a forced fumble on the next Miami Offensive possession resulting in a touchdown two plays later.

1st Quarter- Miami of Ohio received the ball on the opening possession and soon found the end zone with a twenty-two-yard run by running Back Tyre Shelton.  On the ensuing possession Kentucky marched the ball down the field and tied the game with a six-yard pass from QB Will Levis to TE Brendon Bates.  This would be the last score of the quarter as both teams were unable to convert.  The opening drive for Kentucky was also the best drive of the half as the CATS looked out of sync the rest of the half.  QB Levis looked rushed in the pocket and threw a costly interception in the endzone.  At the end of the first quarter Kentucky and Miami were tied at seven.

Second Quarter- Field Goal Kicker Matt Ruffolo was the spark Kentucky needed in the second quarter, as the talented kicker converted on two field goals in the quarter.  Kentucky put a couple of good drives together in the quarter but was unable to find the endzone and had to rely on the kickers leg for scoring.  Ruffolo first FG gave Kentucky its first lead of the game, as he converted on a thirty-four-yard field goal.  The next Miami possession the RedHawks were able to move the chains and get into Kentucky territory.  The Wildcat defense held strong and stopped Miami on third down.  Miami tied the game at ten with a forty-eight-yard field goal by Graham Nicholson.  On Kentucky’s last drive of the half, Kentucky had success moving the ball and Levis looked more comfortable in the pocket finding Tayvion Robinson multiple times down field.  With the clock winding down in the half, Levis threw the ball away with only two seconds remaining to set up Ruffolo for the field goal kick.  Ruffolo converted with a twenty-five-yard field goal and Kentucky led 13-10 at intermission.

3rd Quarter- Kentucky didn’t play the best first half and wasn’t living up to expectations.  In the third quarter the game really changed, and Kentucky opened the first second half with a bang.  Kentucky received the ball on the opening kickoff.  Darion Brown was in the end zone receiving the opening kickoff the second half, 100 yards later and thirteen seconds later, Brown returned the ball for a 100-yard kickoff return.  For the first time all evening Kroger Field come alive and fans were excited.  On the Next Miami of Ohio Offensive Possession, The Kentucky defense stepped up and forced a fumble that was nearly returned for a touchdown, only to be brought down at the eight-yard line.  Two plays and eight yards later the CATS scored again with a passing touchdown from Levies to WR Chauncey Magwood.  Miami of Ohio next offensive possession the RedHawks found success through the air and scored on twenty-seven-yard field goal of the leg of Graham Nicholson.  The Kentucky offense wasn’t finished scoring the ball in the quarter as Ruffolo connected on a career long FG of Fifty yards.  At the end of the third Quarter Kentucky had a comfortable lead and led the RedHawks 30-13.

Fourth Quarter- Kentucky found the endzone one more time in the game with Levis completing a pass to Freshmen Wide Receiver Dane Key for a one yard receiving touchdown.  Ruffolo kick was good and put UK up by twenty- four points.  Kentucky 37-13.  Miami would not score again

In the win Head Coach Mark Stoops achieved a major milestone in his coaching career.  With the win Coach Stoops tied the Great Paul Bear Bryant as the winningest coach in the program’s history with sixty all time wins.  Congrats to Coach Stoops on the remarkable accomplishment, and Stoops has been instrumental in making Kentucky Football relevant again.

Next week, UK schedule gets much tougher as the CATS open SEC Play on the road playing the Florida Gators in the Gainesville, Florida.  The game is scheduled to kickoff at 7:00 pm in the Swamp and will be a challenging test for the CATS and could set the tone for the remainder of the season.  If UK is going to have a chance to win the game UK must improve on the Offensive line and not allow QB Levis to get rushed in the pocket.