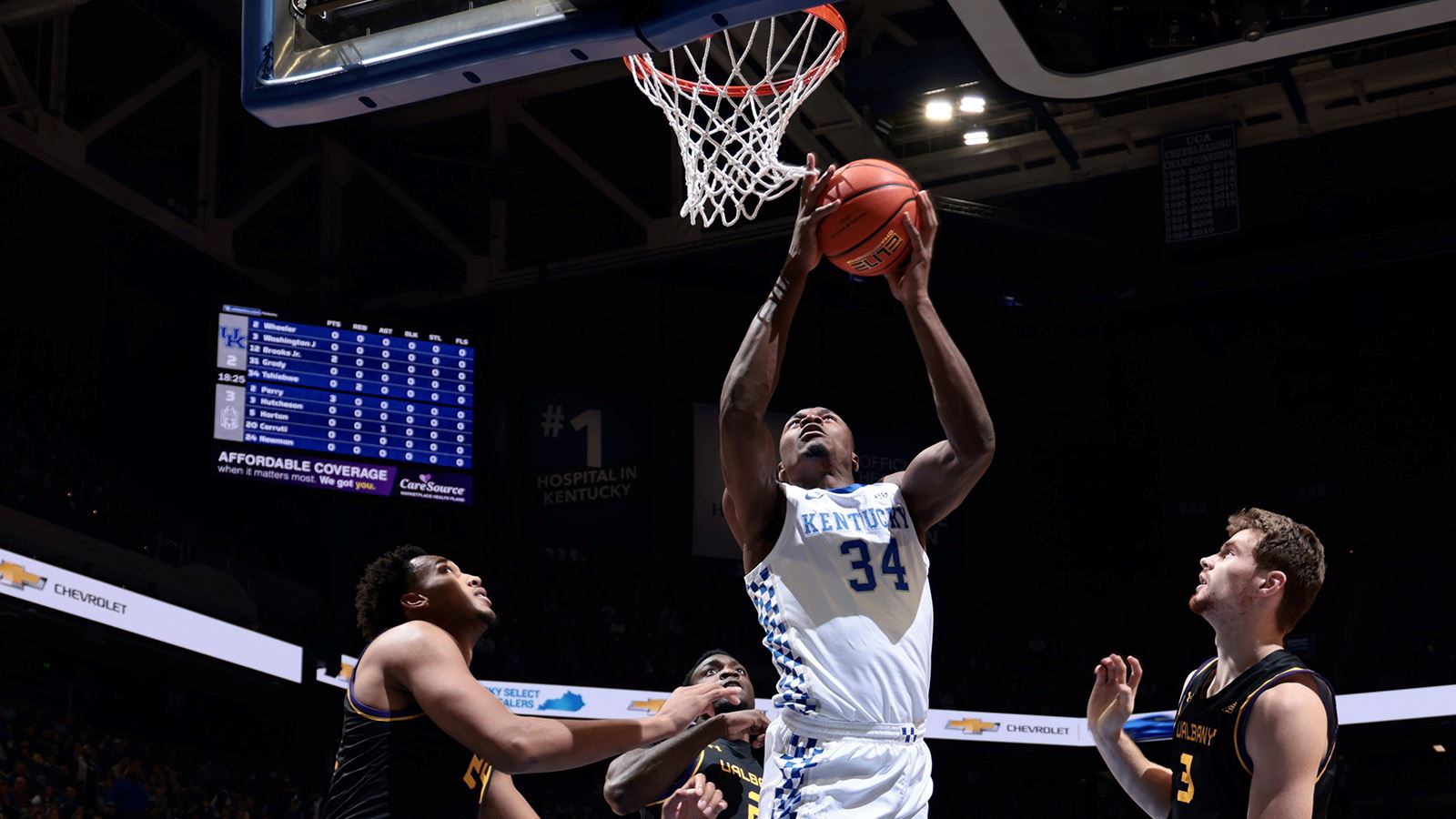 The Kentucky Wildcats got back on the hardwood Monday night at Rupp Arena, taking on the Albany Great Danes with a 7 PM Eastern tip off time. Kentucky came into the game (3-1) on the season, coming with a three-game consecutive home winning streak, looking to make it four in a row.

Davion Mintz was out tonight with an illness. Albany came into the game (0-4) on the season, including a loss to in-state Eastern Kentucky, this past Saturday with a final score of 77 to 64.

Kentucky got off to a slow start, playing a lot of one-on-one basketball, leaving Albany in the game the first half. TyTy Washington had a fast break layup with 11:09 remaining in the first half, drawing contact for the and-1 opportunity, but didn’t connect at the free throw line, putting the Cats up 17 to 14. The
next possession TyTy hit a three, to give the Cats a 20 to 14 lead, giving TyTy nine points on the night.

Kentucky went into the half with a 37 to 28 lead, being counted for nine turnovers, with only three assists. The Cats outrebound the Great Danes twenty-four to nineteen. Kentucky was led offensively by TyTy Washington with thirteen points and Kellan Grady with nine points. Kentucky was led on the glass by no other than Tshiebwe, grabbing nine rebounds. Kentucky took a thirteen-point lead with 14:33 left to paly in the second half, with TyTy Washington getting his own offensive rebound and going back up for a layup to put the Cats up 48 to 35.

Kellan Grady hit a three pointer to put the Cats up twenty with a lead of 59 to 39, with 8:50 remaining the game, forcing Albany to call a timeout. Daimon Collins had a put-back dunk off a TyTy Washington missed layup the next possession, putting the Cats up 61 to 39. Grady hit another three with 6:21 remaining, to put the Cats back up thirty, that started clearing the seats in Rupp Arena.

Kentucky improves to (4-1) on the season, with a four-game home winning streak. Kentucky was led offensively by TyTy Washington with twenty points, Keion Brooks with seventeen points, Sahvir Wheeler with fifteen points, Kellan Grady with fourteen points, and Oscar Tshiebwe with twelve points, putting
all five starters in double digits. Kentucky was led on the boards by Oscar Tshiebwe, grabbing fourteen rebounds tonight, giving him his fourth double-double of the season.

The Cats really need to cut down on the turnovers going forward, considering they turned the ball over seventeen times tonight. The Kentucky Wildcats get back in action Friday night at home hosting North Florida at 7 PM Eastern time.