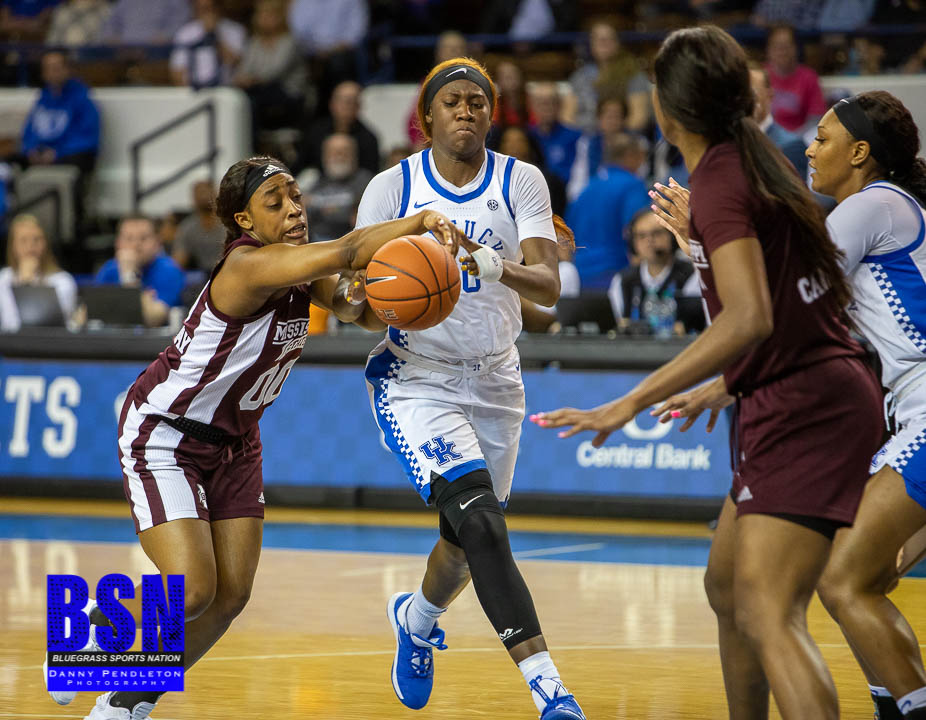 It was the 15th time this season that Howard has scored at least 20 points in a game and the 20th time she has scored in double figures during the 2019-20 campaign. Sunday’s game was Howard’s fifth double-double of the season and the 10th of her career. She also went over 1,000 career points on Sunday in just her second season.

Kentucky (19-5, 8-4 SEC) got 15 points from Chasity Patterson and 14 from Jaida Roper, who scored eight of her points in the fourth period.

Kentucky had big first and third quarters in the game, with the Cats outscoring the Bulldogs 19-9 in the first period and 22-9 in the third. The Cats also won the battle of points off turnovers (20-14) and bench points (26-17).

Mississippi State (22-4, 10-2) raced out to a 6-0 lead, hitting its first three shots from the field in the first 1:29 of the game and forcing a UK timeout. The Cats got on the board when Ogechi Anyagaligbo hit a jumper with 8:00 left in the first, and that basket seemed to spark the Cats, who got a three from Sabrina Haines and a pair of free throws from Roper to lead 7-6 with 6:21 to play in the first.

Kentucky would get back-to-back baskets from Patterson to extend the run to 11-0 and the lead to 11-7 with 4:27 left in the first. Patterson would add a free throw to extend the lead to 12-6 before MSU got a basket from Aliyah Matharu to end the run with 3:05 still remaining in the first. The Cats would close the period on a 7-1 run, including a buzzer-beating three from Howard, to lead 19-9 after 10 minutes of play.

Howard carried the momentum of that shot into the second period, scoring Kentucky’s first seven points in the frame. Howard then assisted on a Tatyana Wyatt layup before hitting another jumper that gave UK a 30-18 advantage with 4:59 left in the half.

In the third period, MSU’s Jessika Carter asserted herself, scoring the first five points of the half for the Bulldogs, but MSU was unable to tie or take the lead. With Kentucky leading 39-37, the Cats went on a 7-0 run, sparked by Howard and Patterson, to lead 46-37 with 4:42 to play in the third period. After Matharu hit a layup, Roper hit an in-and-out-and-back-in three-pointer to extend the lead to 49-39 with 4:00 to play in the third.

MSU got a jumper from Andra Espinoza-Hunter to cut the lead to 49-41 with 2:22 left in the third, but Kentucky answered again, with a 15-footer from Howard and a three from Amanda Paschal to lead 54-41 with 1:07 left in the period. And when Howard hit another long-range three with 13 seconds left in the quarter, Kentucky grabbed its biggest lead at that point, 57-41, which would be the tally after three periods.

Kentucky continued its run at the beginning of the fourth quarter, as baskets by Patterson and Wyatt gave UK a 61-41 lead. But the Bulldogs responded with six straight points, all by Rickea Jackson, cutting the UK lead to 61-47 with 7:28 left. Altogether, it would be a 12-2 Mississippi State run to cut the lead to 10, 63-53, with 4:59 remaining.

After Roper hit a pair of free throws, Jackson hit a spinning jumper, her 12th point of the period, to make it 65-55 UK with 3:36 remaining. After the teams traded baskets, Espinoza-Hunter hit a tough leaner underneath to get MSU within eight, 67-59 with 2:11 to play.

Roper would hit a pair of free throws to extend the UK lead to 69-59. After Jackson missed a jumper in the lane, it was Roper hitting a floater to give the Cats a 71-59 advantage with 1:30 to play.

MSU would not go away quietly. Espinoza-Hunter hit a three from the corner with 1:13 to play to get the Bulldogs within nine. But a pair of Howard free throws with 33 seconds remaining would close the scoring.

Kentucky returns to action on Thursday, visiting Oxford to take on Ole Miss. Tipoff is set for 8 p.m. ET and the game can be seen on SEC Network Plus.