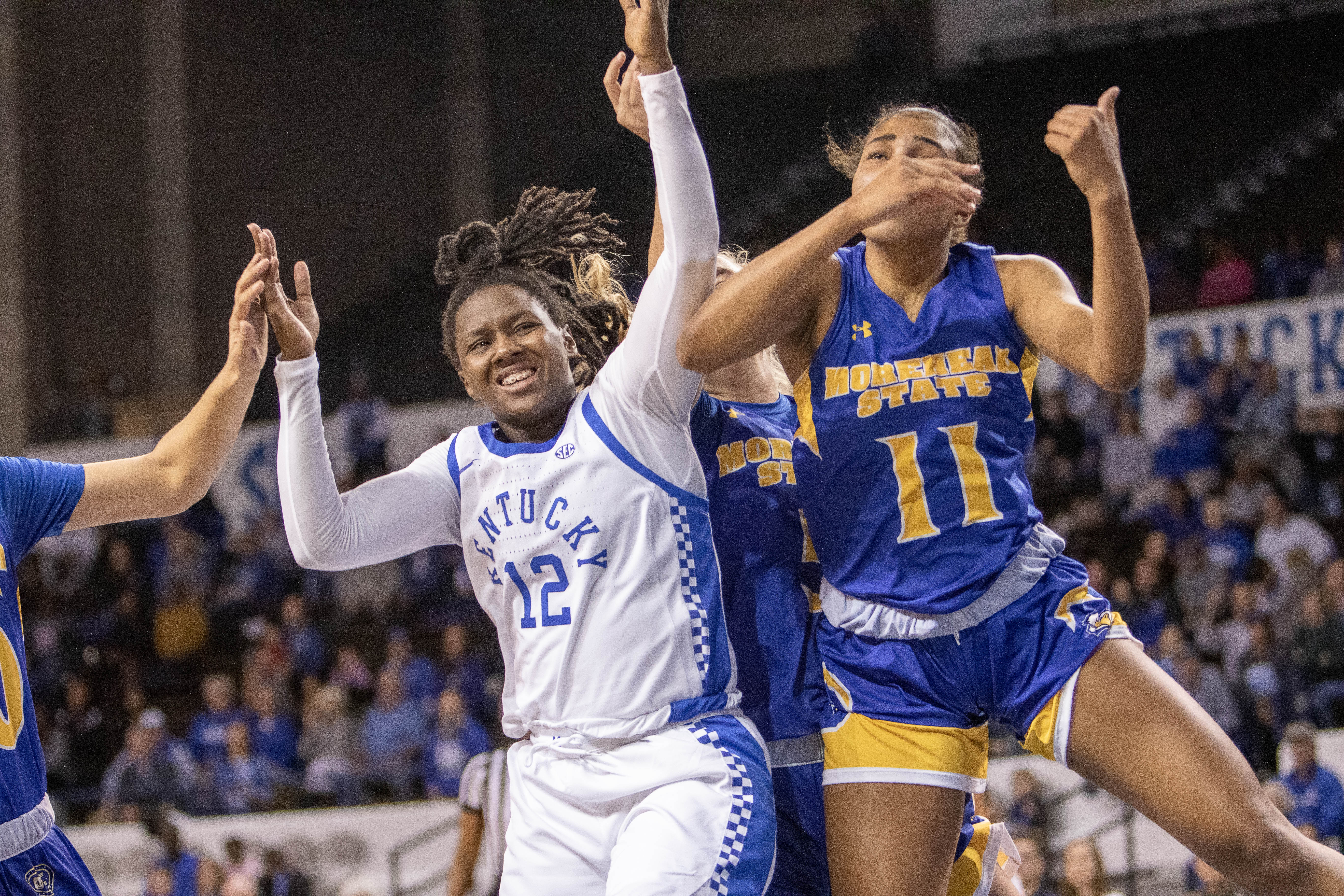 The No. 13 ranked Kentucky Wildcats women’s basketball team improved to a 5-0 record on the season after defeat of in-state foe, the Morehead State University Eagles (2-3) in a 79-54 victory.

Lexington, Ky- After a nail-biting 50-47 victory on the road over the Virginia Cavaliers on Saturday, the Cats returned home to Memorial Coliseum on Thursday night to face off against a fellow Kentucky school, in the Morehead State University Eagles.

Thursday night’s matchup was nothing short of a challenge for the Cats as the Eagles were not to go down without a fight.

The 1st period started with a 5-0 run for Kentucky, and after a few hiccups, the Cats wouldn’t look back. Kentucky not only started having shots fall, but also turned up the pressure on defense forcing 10 first quarter turnovers for the Eagles and pushing the lead to as much as 14 and finishing the quarter with a 27-13 lead.

The 2nd period seemed to be much of the same. Kentucky came out of the break raining back-to-back threes, forcing Morehead State to take their first timeout, down 33-13 with 8:52 reaming in the half. Following the timeout, the Eagles showed a little life, but not enough to make any dents into the Kentucky lead.

The Cats were led by Sophomore guard Rhyne Howard, who came alive in the 2nd period and finished the half with 13PTS on 5/13 (38%) from the field, 5REB, and 2AST. Additionally, Kentucky’s 1st half presence in the paint was unmatched, winning the rebound total by 18-16 and picking up 5 blocks. The Cats pushed the lead to 24, the largest of the game to that point, and took a 48-24 lead heading into the half.

After the break, it was all Kentucky as they stayed on the gas pedal and continued to push the lead. The Cats extended the lead to as much as 34 points before closing the period with a 71-43 lead. As a team, Kentucky shot 47% from the field on 17 attempts in the 3rd period.

Playing into the 4th quarter Kentucky showed no signs of slowing down, keeping the lead built as they closed out the contest. In the end the Cats were led on the stat sheet by Rhyne Howard who tallied 24PTS, 6REB, and 3AST. Kentucky cruised to a 79-54 victory over Morehead state.

When asked about his teams’ dominance post-game, Kentucky head coach Mathew Mitchell stated that he was “proud of his team for improving in practice and then coming out and letting some of that shine through in the game…there were a lot of positives tonight.”

No. 13 ranked Kentucky improves to 5-0 on the season and will take the court next on Tuesday night at 7pm at Memorial Coliseum against the Grambling State Tigers (1-4).