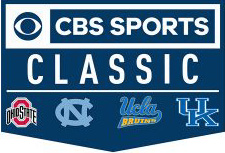 Today, the CBS Sports Classic announced Chicago’s United Center as the site for the 2018 annual event that features Kentucky, North Carolina, Ohio State and UCLA in a college hoops doubleheader.

The fifth annual CBS Sports Classic will take place Saturday, Dec. 22, 2018 at the United Center in Chicago. It will be the second time the showcase will be contested at the venue. The matchups in 2018 will include Kentucky vs. North Carolina – a rematch of last season’s memorable Elite Eight matchup – and Ohio State vs. UCLA.

Ticket information for the 2018 CBS Sports Classic will be available at a later date.

The CBS Sports Classic has been held at four different venues across the country in the event’s first four seasons: the United Center in 2014 (with a return in 2018), Barclays Center in Brooklyn in 2015, T-Mobile Arena in Las Vegas in 2016 and Smoothie King Center in New Orleans in 2017.

This year’s CBS Sports Classic will take place on Saturday, Dec. 23 at Smoothie King Center and will be broadcast on CBS. Ohio State takes on No. #5 North Carolina (12:30 PM, CT), while No. #7 Kentucky faces UCLA directly after. The four programs have collectively won 26 NCAA titles, including North Carolina’s championship last year. The quartet boasts 178 NCAA Tournament appearances and are among college basketball’s all-time winningest programs, combining for more than 7,900 victories.

Brad Nessler and Bill Raftery will announce the games from New Orleans with Allie LaForce reporting from the sidelines.

Three of the four programs have enjoyed success in the Crescent City – both Kentucky and Ohio State advanced to the 2012 Final Four, with the Wildcats winning the national championship that year. North Carolina has also won two national titles in New Orleans (1982, 1993). New Orleans has also been kind to the Buckeyes’ football team; Ohio State knocked off No. 1 Alabama in the semifinals of the College Football Playoff en route to the 2015 national championship. Additionally, UCLA coach Steve Alford helped guide Indiana to the 1987 national championship in the final game of his Hall of Fame playing career