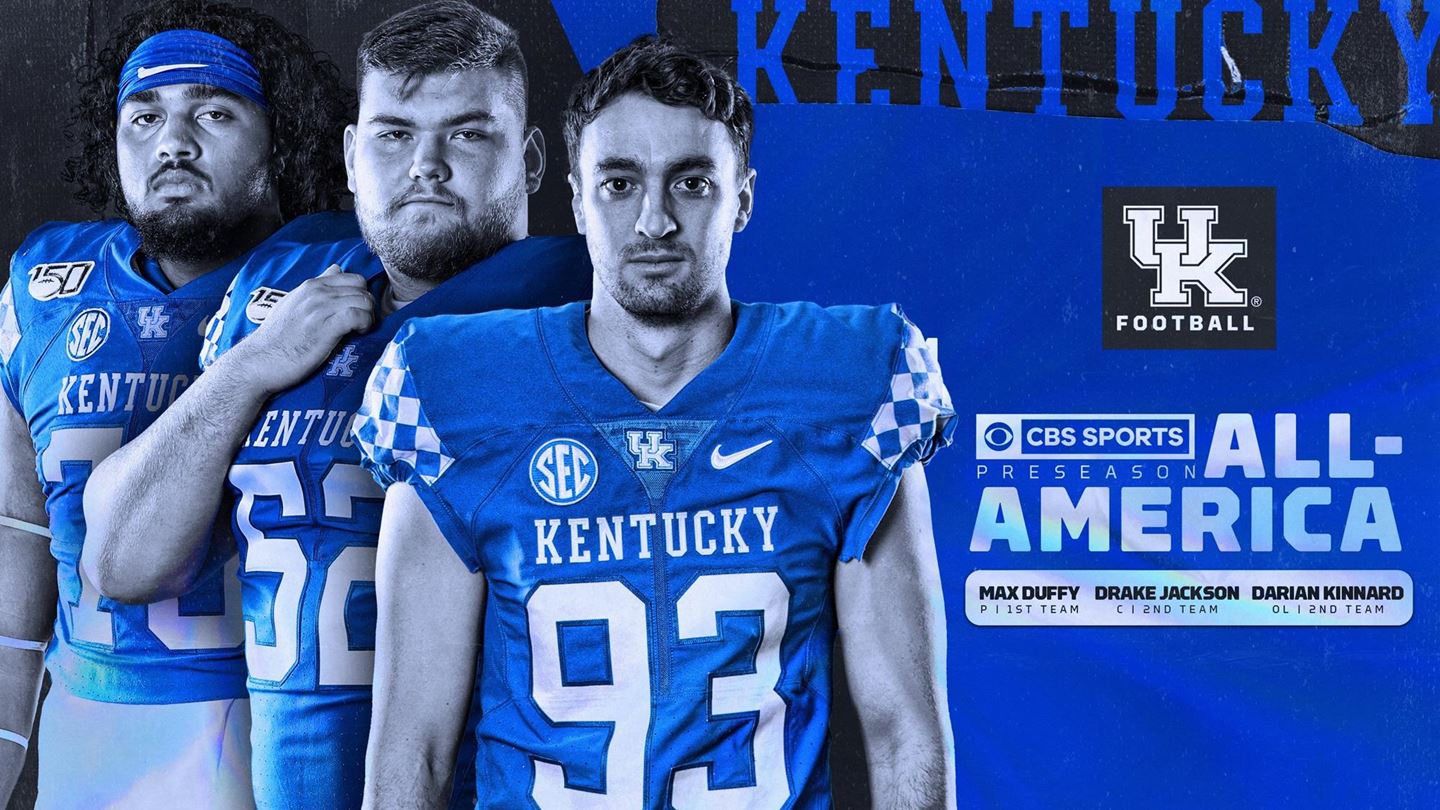 The preseason accolades continue to pile up for punter Max Duffy, senior center Drake Jackson and junior offensive tackle Darian Kinnard as they have been named 2020 preseason All-Americans by CBS Sports.

Duffy, a native of Perth, Australia, was named a unanimous first-team specialist after an impressive 2019 season. Kentucky led the nation in net punting with a 44.55-yard net average and Duffy led the nation in punting at 48.10 yards per punt. He won the Ray Guy Award as the nation’s top punter and was named a first-team All-American by the AP, Sporting News, ESPN, FWAA, Walter Camp, AFCA Coaches’, The Athletic, USA Today, Phil Steele and Athlon Sports. He is UK’s career punt leader with a 46.3-yard average.

Jackson, a native of Versailles, Kentucky, was named to the second-team offense by Athlon after starting at center in all 13 games last season. He now has a team-high 33 consecutive starts as the anchor of Kentucky’s offensive line, the “Big Blue Wall.” He was also named a second-team All-American by Athlon Sports and was on the 2020 preseason first-team All-SEC teams by Athlon Sports and Phil Steele.

Kinnard, of Knoxville, Tennessee, started in all 13 games at right tackle last season. He was named to the second-team offense after finishing with 32 knockdowns and just one penalty in 706 snaps. Kinnard was a key cog in last year’s offensive line who helped UK put together its fourth consecutive season of 2,000 or more rushing yards. The Wildcats did it again in 2019 despite missing three departed starting linemen from the previous season, the school’s all-time leading rusher in Benny Snell Jr., and all three top quarterbacks becoming injured – two were out for the season – and Lynn Bowden Jr., the starting QB for the final eight games of 2019, was a converted wide receiver.

Head coach Mark Stoops, who enters his eighth season at the helm, received votes by CBS Sports for Coach of the Year. Stoops already ranks third on UK’s all-time wins list with 44 and needs just three more to move up to No. 2 with Fran Curci (47). After inheriting a team that finished 2-10 in 2012, Stoops improved or tied the team’s win total for six straight seasons, the only school in the nation to accomplish that feat during that period. Stoops also led the Wildcats to back-to-back bowl wins for just the third time in school history (1950-51 and 2006-07-08).