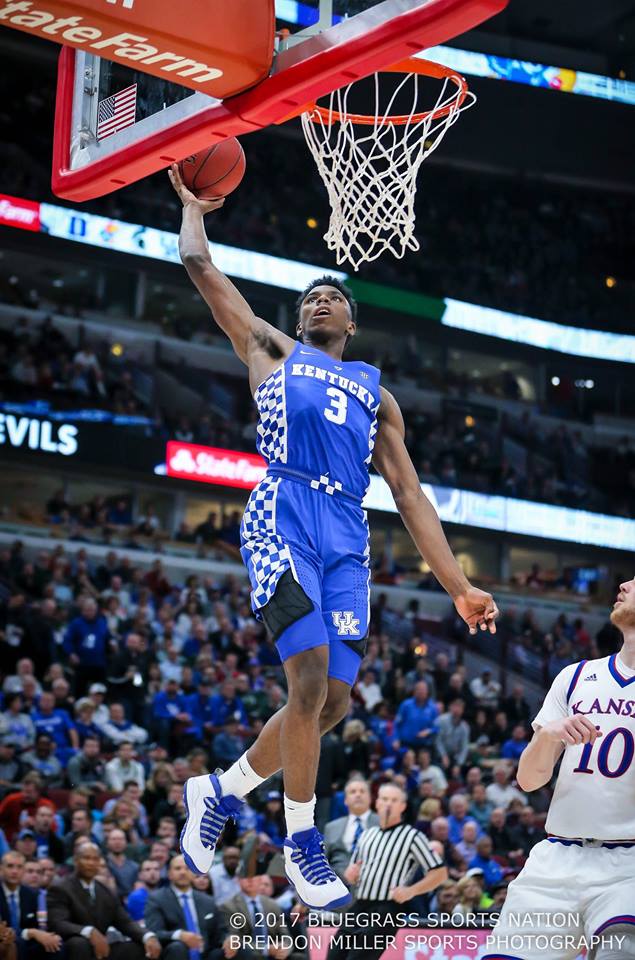 In the second game of the Champions Classic #4 Kansas did battle with the winningest program in college history, the Kentucky Wildcats. UK entered the game as the #7 team in the country and was coming off 2 close wins at home. The game opened with Kansas taking seven 3 point attempts in the first 4 minutes for a 13-7 lead. Kansas continued their run pushing out to an 18-7 lead behind their three point shooting. The Jayhawk 11-0 run was stopped by a couple Wildcat free throws by Diallo. UK would battle back to within 5 at the under 12 tv timeout, as Duke’s lead was cut to 20-15.

At the under 8 minute timeout, Kansas still held the upper hand with a 28-23 score. Kansas had hit on 4 of 11 three point attempts, while the Wildcats were 3 for 5 with Kevin Know hitting all 3 of his attempts. Kentucky would come out of the timeout and score 5 quick points to tie the Jayhawks at 28, prompting Kansas to call another timeout to try to regroup.

UK would battle back and take the lead at the 2:14 mark of the first half, 33-32. Kansas would however respond with a back door cut for a layup by Newman to make it 34-33 Kansas. Kansas would go in to the half with that one point lead. Kansas was led in scoring by Graham with 8 and Newman, Azubuke, & Mykhailiuk with 7 points apiece. For UK Kevin Know paced the young Cats with 12. Diallo had 6, Alexander & Green had 4 each. UK was crushed on the boards in the first half, 24-13. A lot of the rebounds were the result of the Cats failing to control the ball. At least 5 rebounds found their way to the Jayhawks hands. UK was 3 of 7 from three point land while the Jayhawks hit on 4 of 15 three point attempts.

UK opened the second half looking much more comfortable and pulled ahead by 2 at the 18:00 minute mark, despite nearly every call going against the young Cats to include a couple phantom foul calls. It may come from a little bias, but not to exaggerate, the Cats weren’t getting a call going in to the under 16 tv timeout, yet still nursed a 40-39 lead.

At the under 12 minute tv timeout, Kansas was back in front with a 45-43 after UK blew 3 chances to get on the board with some out of control play. UK would turn the ball over 3 straight trip losing all patience. That coupled with some ill-advised three point shots and UK was showing their youth. Kansas did hit a three to make the lead 2.

Kentucky battled back to a tie despite some youthful mistakes. At the under 4 minute timeout, the Cats were tied with the Jayhawks at 57. This game had the makings of something special as the lead see-sawed back and forth.UK would get the ball back trailing 61-59 with 33.6 seconds to go in the game. UK would miss a short jumper and Kansas would get the rebound with 17 seconds. Kentucky would have to foul and Kansas hit both freethrows for a 63-59 lead. The young Cats would not go away though as they score with 8 seconds left to make it 63-61. Kansas would hit their free throws and hang on for a 65-61 win.