Champions Classic Roundup – DUKE SURVIVES THE BATTLE OF #1 VS #2: 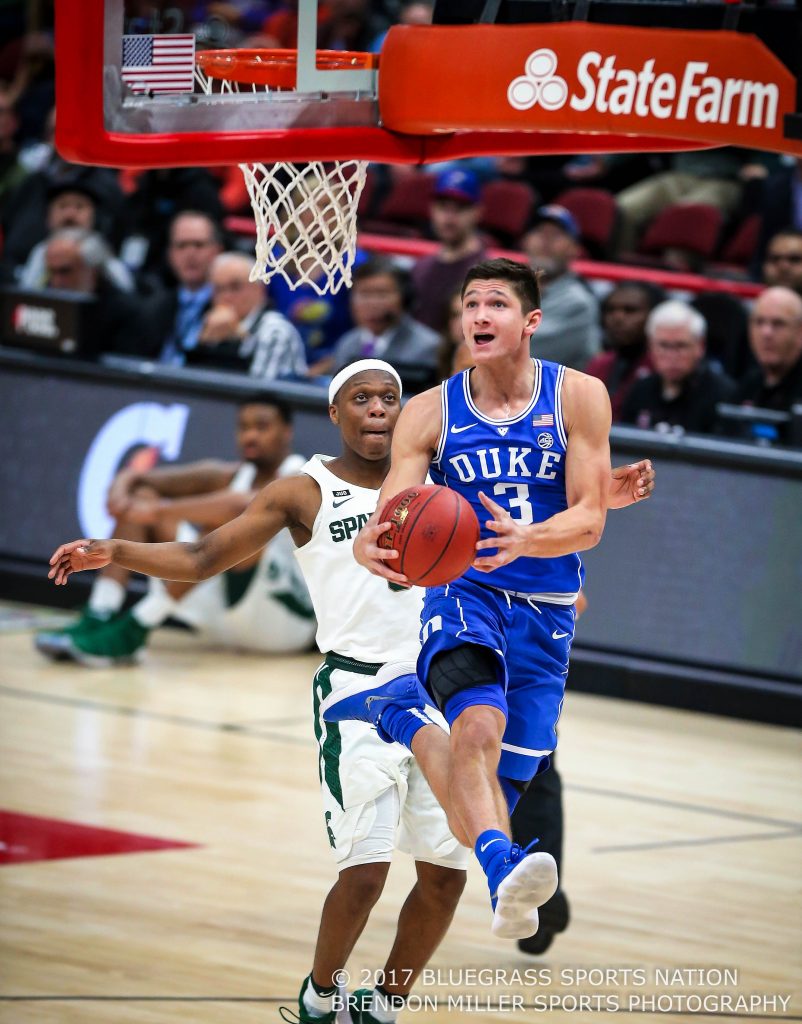 The Champions Classic is one of the premier early season Basketball events of the year.  As in years past four of the Bluebloods of College Basketball participated in the event.  The Team’s features four team’s currently ranked in the Top 10 and each school has one at least one NCAA Basketball Championship in the last twenty years.  In the opening game of the event the Duke Blue Devils battled the Michigan State Spartans in a battle of the top two ranked team’s in the country.  Duke is currently ranked #1 and Michigan State is ranked #2.  In the second game of the night the Kentucky Wildcats ranked #7 will battle the Kansas Jayhawks ranked #4.

College Basketball tipped off last week, and most of the premier teams in the country have played a relatively easy early season schedule.  In week 2 of the early season the hype surrounding College Basketball was turned up a notch with two prime time games on ESPN.  In the first game of the event the two top ranked teams in the country took the floor.  The game was a well hyped game and the media coverage surrounding the games, resembled a Final Four Environment.  ESPN sent both College Game Day Crews to cover the event, and the game was broadcasted by Dick Vitale.  The United Center Was packed and nearly sold out.  The arena was full of Blue as three University colors were Blue, Kentucky, Duke, and Kansas all have Blue Jerseys.  Michigan State fans were sporting its colors of Dark Green.  In the events six year run the event has become one of the most highly anticipated early season games of the year. In every year other than this past post season tournament, and the 2013 tournament at least one team has gone on to compete in the Final Four.  Two teams competing in the Champions Classic have gone on to Win the NCAA Men’s Basketball Championship, Kentucky in 2012 and Duke in 2015. Each team has made the Final Four at least once during the tenure of the event, UK leads with 3 appearances since 2011-2012 season, Duke, Michigan State, and Kansas each have one appearance in the Final Four since the 2011-2012 season.

Michigan State gets the tip, and was first to score in the game.  19:07 remained in the first Half, Joshua Langford breaks down the Blue Devil defenders and score two points on the layup.  Duke quickly answered as Gary Trent Jr scored on the Jump shot, tying the game at two.  The teams were playing at a frantic pace and each team countered once the opponent scored.  With 9:50 remaining in the first Half, Duke started to establish a comfortable lead being up nine points.  Duke 21- Michigan State 12.  Michigan State Battled back and tightened up their defensive intensity, eventually cutting the Duke lead to one- point Duke 26- Michigan State 25 with 3:58 remaining in the first half.  Both fan bases were excited and each school chanted the schools rally songs.  The score would remain a one- point Duke lead as time was expiring in the half.  Grayson Allen hits a three- point shot at the Buzzer and Duke goes to the locker room with a four- point lead Duke 38- Michigan State 34.  Senior Grayson Allen who has developed a reputation on playing his best in the biggest of games, had a great shooting first half leading all scorers with fourteen points and shooting two for two from behind the ARC.