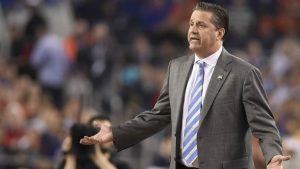 By Ricky Blair
Lexington, KY – The exhibition contest against Morehead State University tonight, which Kentucky won 92-67 was more about charity and giving than it was about a win and loss.  The proceeds from tonight’s game went to Team Rubicon a non-government organization that is helping with emergency response teams in Florida that are currently working with victims of the recent hurricanes that hit Florida and Puerto Rico.  They will also soon be helping victims in California after the recent forest fires.

Coach John Calipari has always been about helping out victims in need.  The Wildcats recently helped raise over 1 million dollars in a local telethon for the flood victims in Texas and now they are back at it again with the exhibition game.  Kentucky and Coach Calipari have been very generous over the years and this caring attitude is passed down to the players.  Many of you may remember the telethon that the Wildcats did back in the 2009-10 season that helped raise money for the hurricane victims of Hatti.  John Wall and DeMarcus Cousins were involved in that telethon.  And the giving by both of these current NBA stars has continued throughout the years as can be seen by the recent 2017 NBA Community Assist Award going to Cousins.  Last year the same award was won by Wall.  This is one of the reasons Calipari does these things.  He wants his players to be about more than just basketball, he wants them to be caring human beings.

While the giving is the biggest reason for this third unscheduled exhibition game, there is some benefit for both teams on the court.  Morehead State, which is coached by ex-UK graduate assistant Preston Spradlin has 10 newcomers on his Eagle team, while Kentucky has eight new players on their roster.  With such young teams, an extra exhibition game was beneficial for both schools.

This was a big game for Diallo, he led all scorers with 23 points on 8 for 12 shooting from the field.  This was a welcome relief after Diallo had struggled with his shot in both the blue-white scrimmage and the Thomas More exhibition game.  Freshman point guard Quade Green had a big game coming off the bench to chip in 20 points and lead the team with five assists.  Shai Gilgeous-Alexander and Kevin Knox contributed 17 and 16 points respectively.  Wenyen Gabriel led the Wildcats in rebounding with six.

Kentucky led most of the game, but they did get a challenge midway through the second half, when MSU cut the lead to two at 51-49.  Despite the pressure applied by the Eagles, these young Wildcats were up to the challenge and pulled away for the 25 point win.

Kentucky will play their next exhibition game against Centre College on Friday, November 3rd at 7:00 p.m. in Rupp Arena.