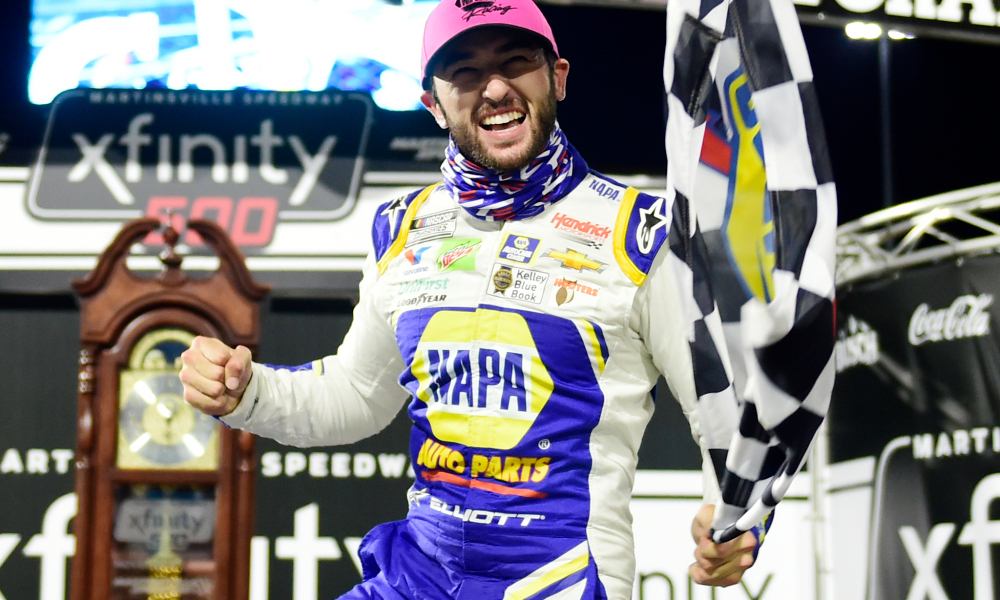 Chase Elliott, the son of Hall of Famer Bill Elliott, ran a flawless Championship race, leading 153 of 312 laps at Phoenix Raceway and held off fellow title contender Brad Keselowski by more than 2.7 seconds at the finish.  NASCAR’s most popular driver is now a NASCAR Cup Champion.

The abbreviated 2020 NASCAR season concluded Sunday with the 2020 Season Finale 500 hosted by Phoenix Raceway. Four contenders remaining in the point’s race, with Joey Logano, Chase Elliott, Brad Keselowski and Denny Hamlin making up the Championship 4 in quest for the 2020 NASCAR Cup Series Championship. The conclusion of the 2020 Season Finale 500 will also be the final start for both seven-time champion Jimmie Johnson and 2012 Cup runner-up Clint Bowyer as full-time Cup Series drivers.

Joey Logano held off Denny Hamlin to take the Stage 1 win as all four title contenders finished in the top-four.

The No. 9 Chevrolet awarded the Season Finale pole and overcame an early setback after starting at the back of the field following a failed pre-race inspection, twice.

As Cup-Champion Brad Keselowski edged ahead of  Chase Elliott for a Stage 2 win, extensive pit-row service would hamper Brad’s advancement multiple times throughout the 312-lap race.

Checking off Stage 1 honors, Joey Logano struggled with an uncommon vibration in the Stage 2 settling for third in the sandbox.

Denny Hamlin crosses the line fourth and Ryan Blaney rounded out the top-five.

Chase Elliott sets the pace with a title-winning move, accelerating past Joey Logano for the lead at 40 circuits until checkers.

20 laps remaining, Chase Elliott accumulated a 2.7-second lead over Joey Logano and appeared to be in excellent position to win his second consecutive race and first series title.

Brad Keselowski worked around Joey Logano to claim the runner-up spot with 10 laps to go.  Unfortunately Brad was still more than 3 seconds behind the new 2020 Cup champ.

Chase Elliott led seven times for a race-high 153 laps and most important, the final lap.

The 24-year-old followed in the championship footsteps of his father, awesome Bill Elliott, who won the 1988 Winston Cup Series championship.

The win for Hendrick Motorsports and Chevrolet was the first since Jimmie Johnson, who retired from Cup competition after the season finale race, won his seventh and final crown in 2016.

Jimmie Johnson finished fifth in his final ride in Hendrick’s No. 48 Chevrolet.

Daytona International Speedway will host the first point’s race of the 2021 season: