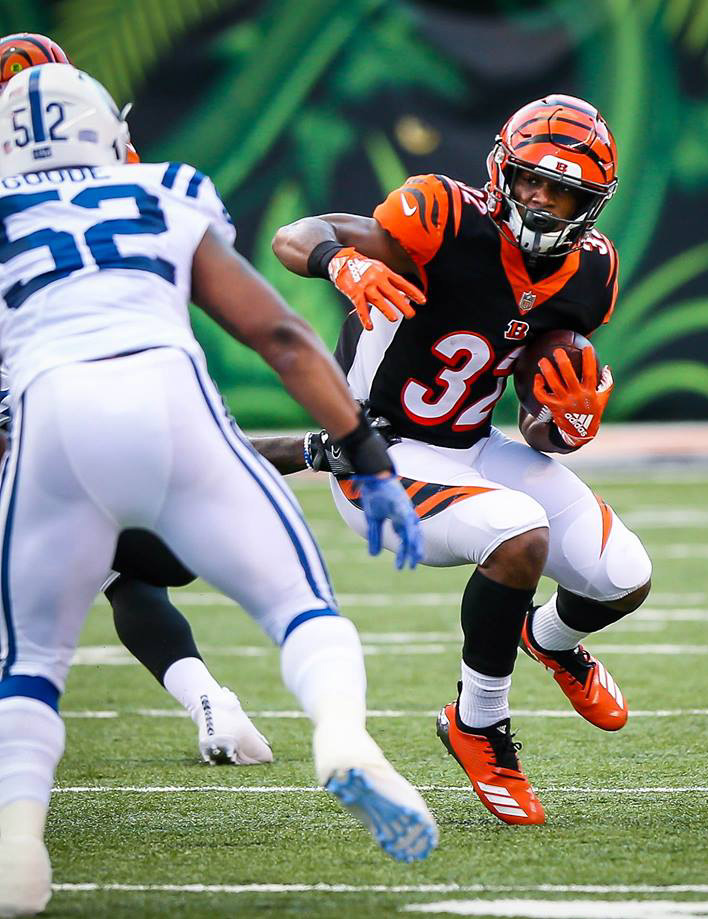 (Cincinnati, Oh.) – Missed it by that much! With their last minute 27-26 loss to the Indianapolis Colts at Paul Brown Stadium, the Cincinnati Bengals finished the 2018 preseason at 3-1. A 28-yard pass from Phillip Walker to Cobi Hamilton with just over a minute to go ruined the chance at a perfect preseason. What does a 3-1 record actually mean? Probably nothing, as preseason performance has never been a reliable indicator of regular season success.

There’s seldom anything in sports more meaningless for fans of an NFL team than the fourth preseason game. By this time, the excitement of seeing new faces in training camp has long worn off, and everyone can’t wait for the real season to begin. The starters never play in this pointless exhibition, wisely unwilling to risk injury in games that don’t count. Subdued fans in a half empty stadium end up watching a bunch of players they’ve never heard of grind it out on the field. In other words, it’s boring. Even NFL commissioner Roger Goodell admitted these games “don’t rise to NFL standards.”

So why am I here? Why is anybody here? According to Bengals head coach Marvin Lewis, the preseason is always about evaluating talent. It’s about getting talented, young athletes—vying for their livelihood—out onto the field to see what they can do. “It’s what it’s all about,” Marvin said, when I asked him earlier if, after fifteen years, he still enjoyed the preseason games. “It’s fun. It’s great to see our young guys go out and play.” Marvin then continued in detail about the gameday exploits of Joe Mixon, John Ross, Mark Walton, C.J. Uzomah, and Carl Lawson. What’s more, he talked about them with excitement, enthusiasm, and a smile on his face—so opposite to the curt and stoic responses we’ve all grown accustomed to. At least he seemed to be having fun.

Conditioning also plays into these preseason games. Players routinely use these contests to get into shape, testing their stamina in game type situations. Supposedly, the Bengals are implementing new offensive and defensive schemes this year, so they’re utilizing these games for added benefit. They also have a lot of new personnel on their roster—a roster that needs to be trimmed to fifty-three in the next few days. On the surface, there appear to be plenty of good reasons to play preseason games.

Who are we kidding? The real reason these games are played is because of the M-O-N-E-Y. With the in-game attendance and television contracts, these games remain as big-time revenue producers. In a sport where teams only play eight games in their billion-dollar stadiums, I guess it helps to have two more preseason games that don’t count on the schedule. It’s always puzzling to me how the league harps so much on player safety while adding 240 extra minutes of meaningless football each preseason in which the players could get hurt.

Alan Cutler, who hosted the pregame, postgame, and halftime shows on the Bengals Radio Network for the past fifteen years was a bit more direct. “One of the biggest jokes in our American sports society is preseason football,” he said. “The NFL teams rip off fans by selling the preseason and regular season games together as a package. No one would pay full dollars for these preseason games.”

Besides ticket packages, television revenue for sixty-five additional preseason games isn’t chump change either. When questioned about that aspect of the NFL cash cow, Cutler was even more outspoken. “Although TV ratings are lower for preseason games, just having the games on television allows the networks to make tons of money when selling it to their advertisers,” he said. “It’s a money scam at the expense of the fans. It’s also not healthy for the players.”

It’s easy to rant at a substandard commodity, but what’s the fix? “Add a couple of players to the roster each year,” Cutler expounded. “It would give more players fewer snaps per game which could help injuries and improve the product. There has already been a lot of talk about expanding the regular season to eighteen games. With the health of the players being a HUGE issue—and it should be—starting the season a week earlier in order to give teams a second bye makes perfect sense. But the NFL doesn’t want to start the season on Labor Day weekend because not as many will be watching on TV.”

On a Thursday night in August, 39,520 fans (the announced attendance) were watching in Paul Brown Stadium. I tallied an additional 79 journalists and media types covering the game on press row. Unfortunately, I also counted nine players who went down during the game with injuries—including Bengals second string quarterback Matt Barkley who left the game in the first quarter with a left knee injury. That alone is reason enough to stop this insanity. It’s time to shorten the preseason. I wouldn’t mind if it were abolished altogether.

Next week, it’ll be the Cincinnati Bengals versus the Indianapolis Colts once again. This time, at least, it’ll be for REAL.

John Huang is a columnist for Bluegrass Sports Nation, Sports View America, and Nolan Media Group. If you enjoy his writing, you can read more at www.huangswhinings.com or follow him on Twitter @KYHuangs.