Before we begin a Sports Alert for you:
John Huang will be the guest host of Morning Tip Off WKJK1080 (also on iheart) at 8 am this Wednesday, August 1. Leading off for The Leach Report and Kentucky Sports Radio. 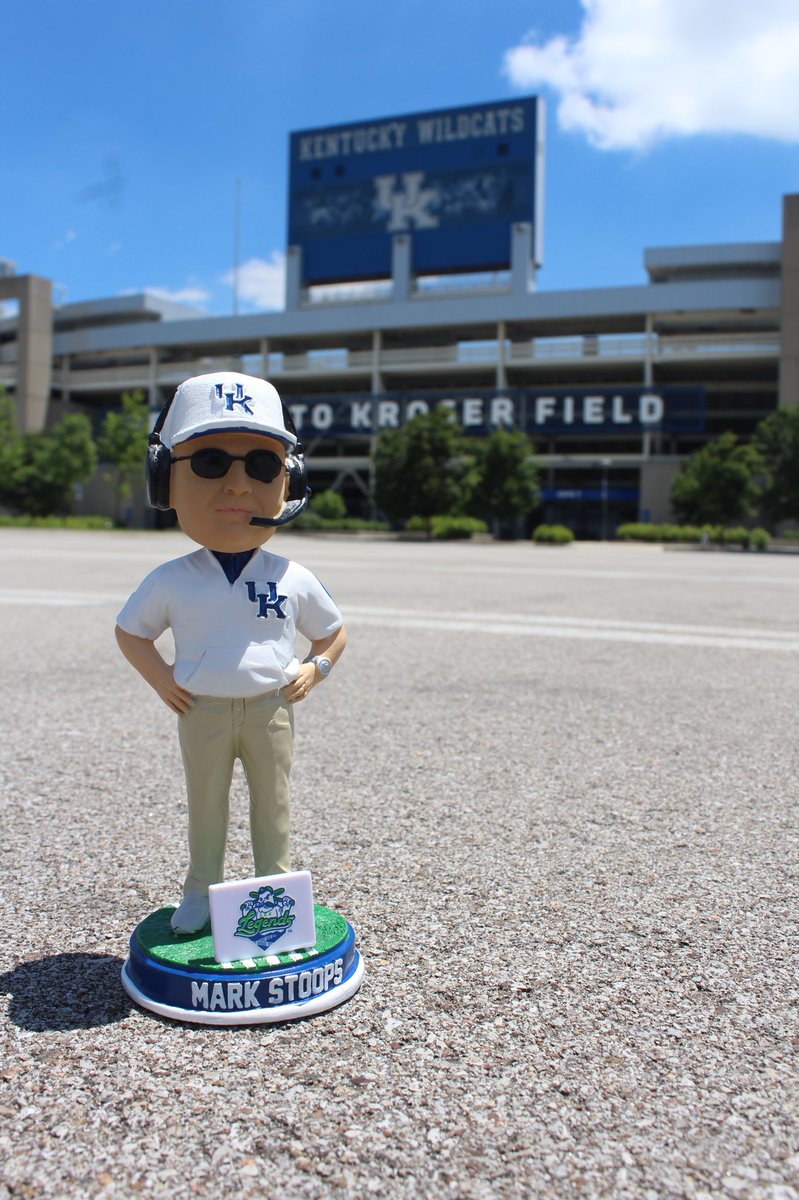 (LEXINGTON, Ky.) – The term “make or break” is far too often used to describe a season poised on the slippery slope of either astounding success or demoralizing failure. Once again this year, a tortured Kentucky football fan base is perched precariously on such a slope—with emotions running high and patience running low. Whether he likes it or not, head coach Mark Stoops finds himself in that proverbial make or break year entering his sixth season at the Wildcat helm. A 26-36 (12-28 SEC) won-loss record and back-to-back bowl appearances is nothing to scoff at, but neither is it something that will put talk of buyouts and hot seats to permanent rest. This is the year to poop or get off the pot, fish or cut bait, win big or strike out.

Stoops’ most lasting off-the-field legacy may just have been his ceremonial pitch at the Lexington Legends game this past summer. The 51-year-old Youngstown, Ohio native threw a perfect strike from the top of the mound. Not coincidentally, that evening was also Coach Mark Stoops Bobblehead night. As one of the many fans gifted with a plastic replica of his nodding oversized noggin, I thought it appropriate to ask Coach Bobblehead the following questions that all True Blue inquiring minds want to know.

Q: The first question deals obviously with the starting quarterback mystery. With Stephen Johnson graduated and Drew Barker giving up football, Kentucky is left with four potential starting quarterbacks who have never thrown a pass in a real live game. In this age of automatic redshirts and well-planned transitions, how does that even happen? Redshirt sophomores Gunnar Hoak and Touchdown Terry Wilson are apparently neck in neck for the starting honors against Central Michigan on September 1. Redshirt freshmen Danny Clark and Walker Wood remain a couple of steps behind. Whoever emerges the victor will have to rely on a veteran offensive line with at least one returning player at every position to offset their own youth and inexperience. OK Coach, with that in mind, who’s going to start at QB this year?

Q: For somebody who built his reputation on coaching players in the secondary, Kentucky’s secondary under Stoops’ tutelage has been abysmal. Last season, the Wildcats finished 13th in the league in pass defense despite returning nearly every starter. The supposedly all-star caliber talent the likes of Chris Westry, Derrick Baity, Mike Edwards, Darius West, and Lonnie Johnson gave up a whopping 3,271 yards—tied for the second most yards given up by a Kentucky defense dating back to the end of World War II. The good news this year is that Kentucky’s defensive line should be much better, thus taking some of the pressure off of the aforementioned secondary. Despite the supposed improvement in the defense across the board, the coach is still responsible for covering the Florida receivers, right?

Q: Kentucky’s conference schedule may once again be their undoing. As is usual and customary every year, the so-called experts pick Stoops’ troops to finish near the bottom of the pack. As if road games at Florida, at Texas A&M, at Missouri, and at Tennessee weren’t challenging enough, the Wildcats also face a murderer’s row of returning all-star caliber opposing quarterbacks. Missouri’s Drew Lock, Vanderbilt’s Kyle Shurmur, South Carolina’s Jake Bentley, Georgia’s Jake Fromm, and Mississippi State’s Nick Fitzgerald all are back after finishing in the top 10 in passing in the league last year. Hey Coach, if you couldn’t stop them last year, how in the world do you expect to contain them this year?

Q: Back in the summer, Coach Stoops described the drug related arrest of former safety Marcus Walker as something that really hurt the program. That’s probably an understatement given the fact that police found more than $95,000 in cash and 52 grams of cocaine inside Walker’s apartment near campus. Although swiftly dismissed from the team, it simply was not a good look for everyone involved. The incident with sophomore offensive tackle E.J. Price and his bizarre tweets this past spring also wasn’t a good look for the program. There’s been so much speculation about what happened during the few hours that Price was apparently off and then mysteriously back on the team that I thought Coach Stoops might want to enlighten us.

Well, there you have it—an interview chocked full of as much information as if the real live Mark Stoops were here answering the questions. As you can see—just like the real Coach Stoops—Coach Bobblehead has remained fairly mum about many aspects of his team and how he expects the season to play out. Perhaps he’s feeling the pressure of the upcoming “make or break” year. It’s more likely that he’s biting his tongue right before unleashing his sixth-year juggernaut on an unsuspecting football world.

Despite inexperience at quarterback, an underperforming defensive secondary, a murderous schedule, and some off the field turmoil, Kentucky counters with potentially their best running back, their best tight end, and one of their most talented receivers to date in their inglorious history. Benny Snell, C.J. Conrad, and Lynn Bowden together with a drastically improved defensive line could easily flip the script on this team from “break” to “make.”

Do I think it’ll happen? It’s still a bit too early to tell. A lot will depend on quarterback play. Once Kentucky returns home from Gainesville after their tilt with the Florida Gators, things will begin to crystallize. That’s only the second game of the season, but I think we’ll know something by then. Any final thoughts, Coach?