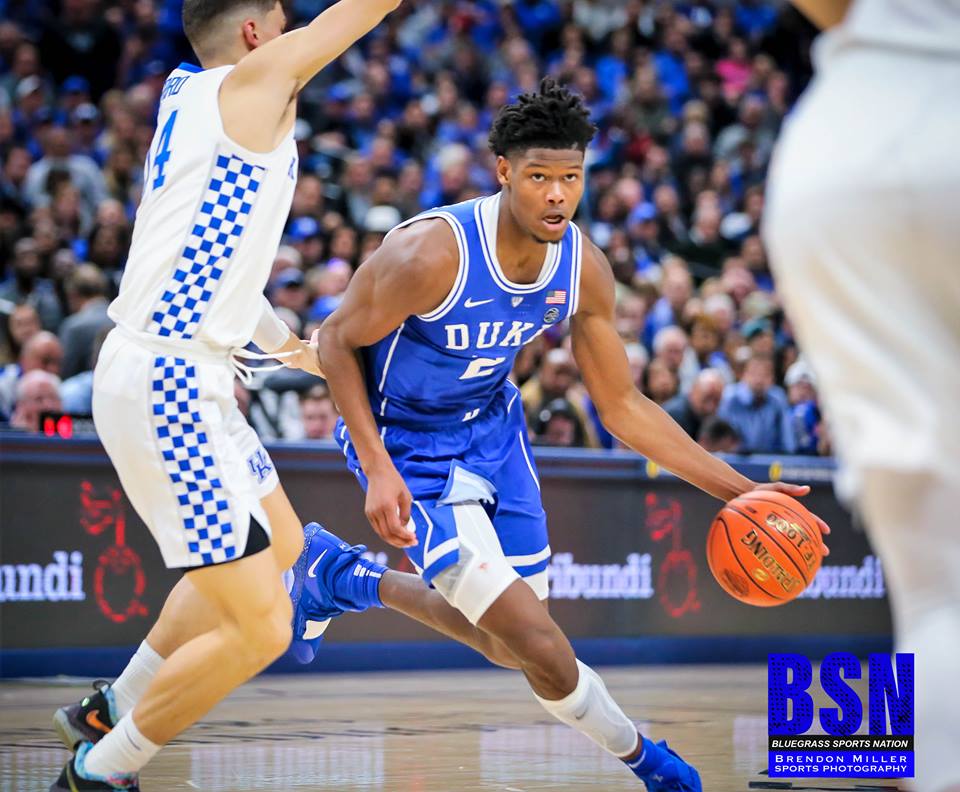 DUKE TRIO OF WILLIAMSON, BARRET, AND REDDISH COMBINE FOR 83 POINTS, EMBARASSING THE CATS BY 34 POINTS IN THE CLOSING GAME OF THE CHAMPIONS CLASSIC.  DUKE 118  KENTUCKY 84.

The day has finally arrived, Kentucky vs Duke will help tipoff the 2018-2019 season in the primetime game of ESPN’s Champions Classic.  Throughout the summer and into the preseason, the sports world has been divided on who has the best Basketball team in the country.  Kentucky traveled to the Atlantis Resort in Nassau, Bahamas dominating competition throughout the world during a four game scrimmage.  The Following week Duke had a similar trip only travelling to Toronto, Canada battling four teams from various areas of the world, Duke also demolished their opponents.  Tonight, the two teams met at Banker’s Life Fieldhouse Center Court, in one of the most anticipated regular season games in recent years.  The debate to be settled tonight, the winner will also break a tie for the most wins in the history of the event.  Kentucky and Duke are both tied with 4-3 records.  The two teams are 1-1 playing head to head, a lot of historical significance to be determined with the winner of tonight’s event.

Coach Calipari and Coach K are both Naismith Basketball Hall of Famer’s and are some of the most iconic coaches in the history of the sport of college basketball.  Coach Calipari may work the one and Done system better than any other coach in the history of the sport, as he has sent twenty five one and done players to the NBA since the 2009-2010 season.  Coach K has also mastered the one and done rule sending 16 Blue devils to the NBA.  The Two coaches are constantly in recruiting wars as the Nation’s most coveted recruits usually attend Kentucky or Duke University.  Tonight, some of the most heralded players in all of college basketball compete in the Champion’s Classic night cap.  Duke has the # 1 ranked recruiting class in the county with 3 of the top five players in the country led by RJ Barret, Cameron Reddish, and You Tube Dunking Sensation Zion Williamson.   Kentucky may not have the house hold names like Williamson and Barret but are a more balanced team with nearly 2 McDonald’s All American’s at every position.     Pro scouts are expected to swarm the event, and the excitement from all the fan bases creates a Final Four like Environment.  The event is a huge recruiting tool for some of the nation’s top uncommitted recruits, as many are considering both programs.

With the first half starting it was apparent tonight matchup was the premiere game of the Classic.  The Atmosphere and fans were loud and the few empty seats that were sparsely located in the building was nonexistent in the second game, with every seat filled.  Duke gets the tip and is the first to score.  The trio of Zion Williamson, RJ Barrett, and Cameron Reddish are the real deal, and are very impressive to watch play.  Zion is the strongest Basketball player I’ve ever seen and combined with his quickness and agility make him a special player.  Barret and Reddish are 2 athletic and guards that can stroke the ball from behind the arc.

The game starts out close as Kentucky relies on Keldon Johnson’s athleticism to score the ball in transition.  Duke starts to maintain a comfortable lead as the Blue Devils can do no wrong and are shooting the ball at a very high percentage.  The game stays a comfortable 16-18 points Duke lead as Williamson is having his way with the smaller Wildcat defenders.  UK inserts EJ Montgomery, who nearly committed to Duke in the Spring, chose to play his collegiate career as a wildcat.  Montgomery makes an impact in the first half with hustle play and being a force on the boards.  The Trio of Williamson, Barret, and Reddish combine for 55 points in the first half, and the Blue devils take a seventeen-point lead to the half leading Kentucky 59-42.    The Blue devils also are leading every major statistical category, but the most impressive stat of the night is the Blue devils shooting 6-12 from the ARC, and only committing 3 turnovers.

Kentucky played a disappointing first half, but the team had moments of hope as the team never quit competing and many of the Big Blue nation faithful still felt confident the CATS would come back.  As the second half proceeded, the hope the wildcats had turned into despair.  Zion Willamson comes out in the second half, and absolutely puts on a show that had spectators from all the teams amazed by his ability.  The Blue Devils quickly add to the lead and before you could bate your eyes, the Blue devils are up 30 points and not slowing down.  Kentucky doesn’t look confident and the Blue devils look invincible.  The Big three of Williamson, Reddish, and Barret each have 20+ points.  Kentucky calls several timeouts to settle down the CATS, but nothing was working.  Frustration builds on the Coaching staff and the once static Big Blue Nation looks on with disbelief.  The Duke role players also started to make a difference in tonight’s contest.  Marcus Bolden has several blocks and electrified the crowd with put back dunks over KY’s Reid Travis.  As the game ends the Duke Blue Devils cruise to a 34-point victory over the Kentucky Wildcats.  Final Duke 118 Kentucky 84.

Williamson, Barret, and Reddish combine for a cumulative total of 83 points.  Barret is the leading scorer of the game with 33 points, Zion contributed with 28 points, and Cameron Reddish finishes the game with 22 points.  Keldon Johnson and Reid Travis have solid games for the CATS, as Johnson leads the team in scoring with 23 points.  Reid Travis finishes the game with 22 points and seven rebounds.  Duke also connects with 46% from behind the ARC hitting 12- 26 compared to the CATS who only went 4 for 17 from behind the ARC.

The most anticipated regular season game of the season is now in the books, although the outcome wasn’t what we expected.  Duke Could do no wrong tonight, and the CATS couldn’t contain the Blue Devil runs or offer any way to counter the Blue Devils.  Duke embarrasses the CATS on national TV defeating the CATS by 34 points.   Coach Calipari will use this game as a teaching tool and will use the loss as motivation to better prepare his team.  Id personally love to see these two teams square off again in March Madness, the CATS will be better prepared, and the game would be much closer.  Kentucky come into the game a little over confident, and a devasting loss like tonight will bring the CATS back to reality.  Kentucky is still a good basketball team and are very capable of making a deep run in the NCAA tournament this year.    Kentucky will next play Southern Illinois Salukis on Friday, November 9th, 2018.  Continue to follow, like, share, and enjoy our coverage of the Cats.  Bluegrass Sports Nation can be found under the web address www.bluegrasssportsnation.com and social media sites Facebook Bluegrass Sports Nation, and twitter @ BGSportsNation.