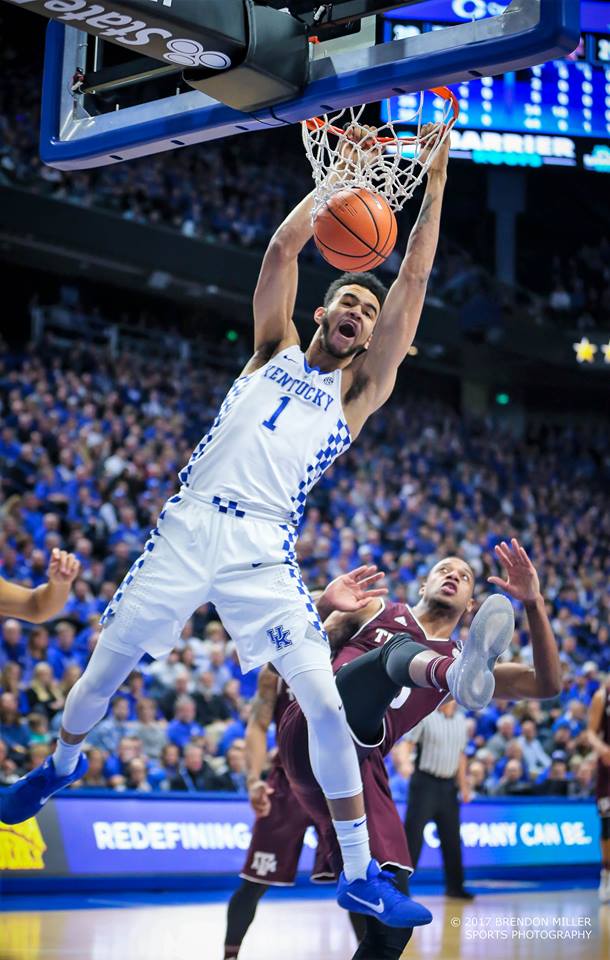 The Texas A&M Aggies came to Rupp Arena looking to break a three-game losing streak to the Kentucky Wildcats. The Cats/Aggies matchup has become one of the most competitive matchups in the league. Four of the last seven games between the two teams have went into overtime. Texas A&M have struggled as of late opening the SEC season 0-3 but they haven’t had their full team on the court for some time. When asked which A&M to prepare for, Kentucky Assistant Joel Justus stated “ I think you have to prepare for all of them.” Tonight the Wildcats often looked unprepared but were still able to pull out the win.

The first half began with great shooting from both teams. The Wildcats shot 6 for 8 to open the game while the Aggies opened the game 8 for 10. Kentucky showed great shooting from behind the arc hitting their first three 3-point field-goals. Early foul trouble once again was a problem for Kentucky. Kevin Knox picked up his second personal foul with 15:56 left in the half and saw limited action for the rest of the half.

During the last 10 minutes of the first half the Referees made several questionable calls against the Wildcats and the Rupp Arena crowd voiced its displeasure. One of the things that got the crowd cheering was Brad Calipari checking into the game with 4:21 left. With the absence of Quade Green due to a back injury, Coach Calipari looked to his son to fill in. Texas A&M shooting cooled off ending the half shooting 1 for 7 and were lead in scoring by Tyler Davis with 14 points. Kentucky was lead in points by Shai Gilgeous-Alexander with 12 points. UK went into the locker room leading 37 to 35 thanks to a Kevin Knox 3-pointer at the end of the first half.

A slow start for the Wildcats as they found themselves down early in the 2nd half 39 to 44 after a three-point basket by Admon Glider. After a very sloppy start, Kentucky played a more aggressive defense that allowed Hamidou Diallo to score ten straight points to tie the game at 49. Texas A&M held a four point lead for most of the second half. Every basket that the Wildcats made was met with a whistle on the other end. Later in the half the Wildcats matched every Texas A&M basket with free-throws. At one point Kentucky hit six straight free-throws to keep the game tied. The Aggies, however, had back-to-back turnovers that allowed Kentucky to gain a 3 point lead. The closing seconds of the game kept the UK fans anxious. Texas A&M were given many chances to take the lead including two 3-point shots that would have given them the lead. However, Kentucky held on to the lead to get the victory 74 to 73

A great second half by Hamidou Diallo gave the Cats the edge. He led the team with 18 points with Washington and Gilgeous-Alexander with 16 points each. Even though the Cats got the victory this game was nearly impossible to watch. It seemed to be a foul called on every possession. The teams combined for 58 free-throws that made the game crawl by at a snails pace. Never-the-less the Wildcats got the victory and pull to 3-1 in the SEC and 13-3 overall.

The Cats play another road game at Vanderbilt on Saturday Jan. 13th at 4 P.M. The game will be televised on ESPN.