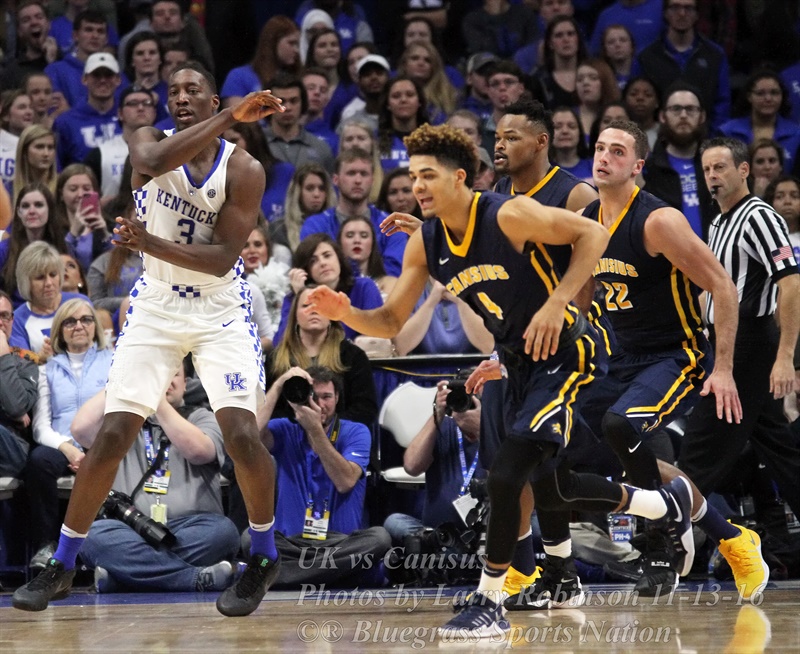 The Kentucky Wildcats improved to 2-0 on the season, beating the Canisius Golden Griffins 93-69, in Rupp Arena on Sunday evening. The Wildcats had four players score in double figures for the game, being led by Isaiah Briscoe and De’Aaron Fox each scoring 21 points, Malik Monk contributing with 16 points and Edrice “Bam” Adebayo recording his first double, double as a Wildcat, having 14 points and 11 rebounds.

The Wildcats started off slow in the first half, until finishing on a 6 to 0 run the last 1:30 minutes to take a 44 to 35 lead at the break. Isaiah Briscoe led the Cats in scoring the first half with 17 points. The Griffs held a rebounding edge at the half, but Kentucky turned the Griffs over 10 times and connected 14 of 20 free throws in the first 20 minutes of play.

Kentucky’s aggressive defense continued the second half as the Wildcats turned the Golden Griffins over 8 more times for 18 total turnovers for the game. Kentucky also held the rebounding edge 39 to 36 at the end of regulation.

Canisius was lead in scoring by Kassius Robertson with 16 points, and falls to 0-1 on the season.

The Wildcats next game is Tuesday, November 14, at Madison Square Garden, in New York City at 7:00 p.m. as they take on the Michigan State Spartans.