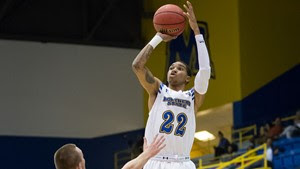 With their first loss on the year, the Eagles fall to 2-1 on the season.
“It was a tough one tonight. We played hard, but we didn’t play smart all of the time. I thought we did a good job, but we just need to go back to the drawing board and get ready for the next one,” said head coach Sean Woods. “It’s the first time for a lot of these guys playing on the road in a hostile environment. Give Marshall a lot of credit, they were ready for us, they wanted to do everything they could after we beat them the last three years.”

After leading the majority of the first half, the Eagles went into the locker room at halftime, trailing 44-42.

The Eagles pulled within two at 75-73 on a layup by sophomore Malik Maitland with four minutes to go and had several chances to pull even, but couldn’t get a key shot to fall.

Senior Stevie Browning led Marshall with 32 points as she shot 12-of-18 from the floor and 4-of-6 from deep.

The Thundering Herd shot 30-of-36 from the free throw line, while the Eagles shot 3-of-6. Morehead State outrebounded Marshall, 38-36, and finished with 13 offensive rebounds.

Prior to the loss tonight, Morehead State had won three straight against Marshall.

Next up, the Eagles travel to Evansville to face the Purple Aces on Saturday afternoon at 1 p.m. ET.