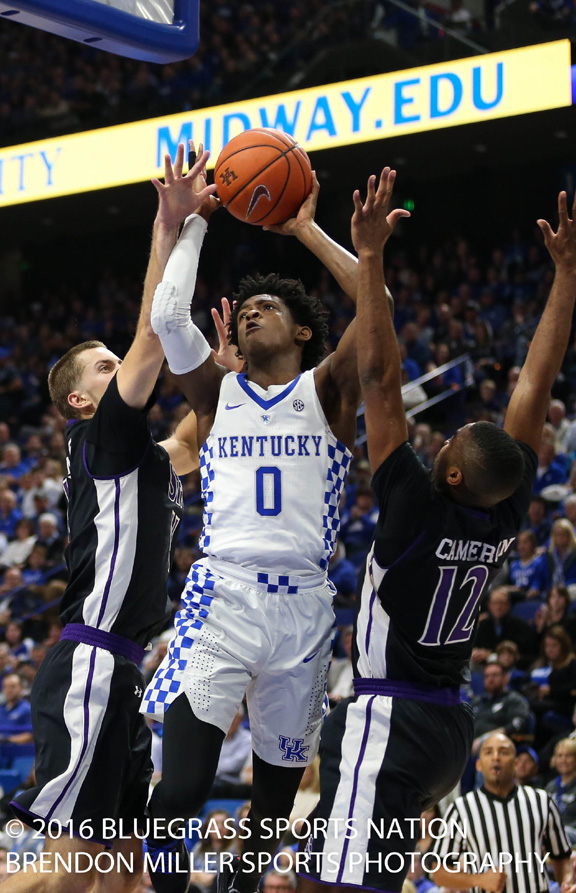 Fox goes up against 2 defenders – Photo by Brendon Miller

LEXINGTON, Ky. – The preseason awards continue to roll in for several of the Kentucky Wildcats. Freshmen Bam Adebayo, De’Aaron Fox and Malik Monk were among 50 players selected by the Atlanta Tipoff Club for the 2017 Naismith Men’s College Player of the Year on Thursday.

UK’s trio were among 12 freshmen selected among the 50 total players for the preseason watch list. The mid-season list of 30 will be announced on Feb. 9.

Adebayo led the team in rebounds over the two-game series with 10.0 per game. He also notched 11.0 points, 1.5 blocks and shot 71.4 percent from the floor. The former North Carolina Gatorade Player of the Year averaged 18.9 points and 13.0 rebounds per game as a senior at High Point Christian Academy a season ago. He has already been tabbed to the Associated Press’ All-SEC preseason first team and was a Kareem Abdul-Jabbar preseason nominee for the nation’s top center.

Fox showcased his blazing speed en route to leading the team with 18.5 points per game in UK’s two exhibition contests. He shot 66.7 percent from the floor, while also contributing 5.5 assists and 3.0 steals per game. He was the Texas Gatorade High School Player of the Year in 2016 and was rated as the nation’s No. 6 overall player coming out of high school. Fox was a first-team AP All-SEC preseason selection and is among the early season candidates for the Bob Cousy award which honors the best point guard.

Monk was the 2016 Arkansas Gatorade High School Player of the Year in addition to earning the state’s Mr. Basketball award after averaging 28.6 points, 7.5 rebounds and 4.4 assists per game a season ago. Monk displayed his versatility in UK’s two exhibition games highlighted by several spectacular athletic dunks. He logged 15.0 points, 4.5 assists and 3.0 steals per game in the two outings. Monk was tabbed to the Jerry West preseason watch list which awards the nation’s best shooting guard and he was a second-team selection to the AP preseason All-SEC squad.