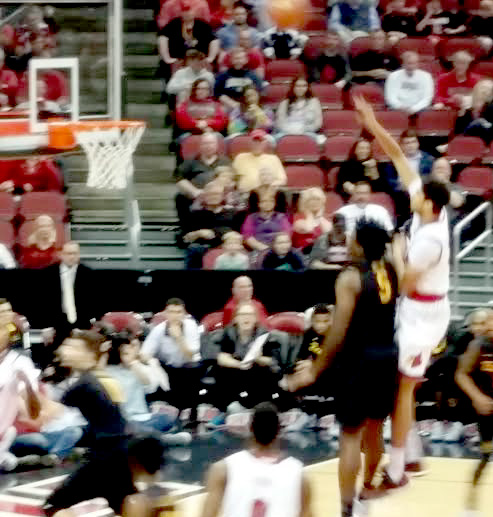 A well balanced attack propelled the No. 12 Louisville Cardinals to an easy 88 – 56 win over visiting Long Beach State.

Seven U of L players scored at least eight points led by Jaylen Johnson’s 14 points and 11 rebounds.  Johnson has played strong and above the rim in U of L’s first three games of the season.  He leads the Cardinals in both categories on the season.

Rick Pitino has been very pleased with his junior forward’s play so far saying, “I think Jaylen Johnson is just – he’s doing everything we’d hoped for and then more.  He’s going after every single rebound.  He considers every shot a pass to him.  He’s posting up well. He’s being very physical.  It’s great play by him, you got to really give him all the credit in the world, because when you play 18 minutes and get 14-11, shooting 7 for 11, that’s a pretty darn good day’s work.”

The center position, a source of concern in the offseason, produced in a big way against the 49ers.  The combination of Mangok Mathiang and Anas Mahmoud combined for 19 points and 15 rebounds.  Mangok was aggressive on the offensive end finishing with 11 points.  More importantly he hit all five of his free throws.

Redshirt freshman, Ryan McMahon, came off the bench and scored six points.  The concern for McMahon was not on the offensive end, but rather on the defensive end.  He showed against the 49ers that he could hang defensively by grabbing three rebounds and even blocking one shot.  He also had a game-high five assists, along with Quentin Snider.

I thought that Ryan McMahon did a terrific job, believe it or not, on defense, which I didn’t expect in blocking out and playing in the passing lanes, so that was excellent.” Pitino said.   “We know he can shoot but is he affecting the game in other ways like with five assists and five rebounds.  I was just impressed with his defense.  He’s got a lot of savvy.”

The Cards were especially strong on the defensive side of the ball, holding the 49ers to 29.5 percent shooting from the field and outrebounding them 51 – 37.  U of L also blocked nine shots and had nine steals to go along with 45 deflections.

Louisville now heads to the Battle of Atlantis Wednesday at 9:30 to take on Old Dominion.