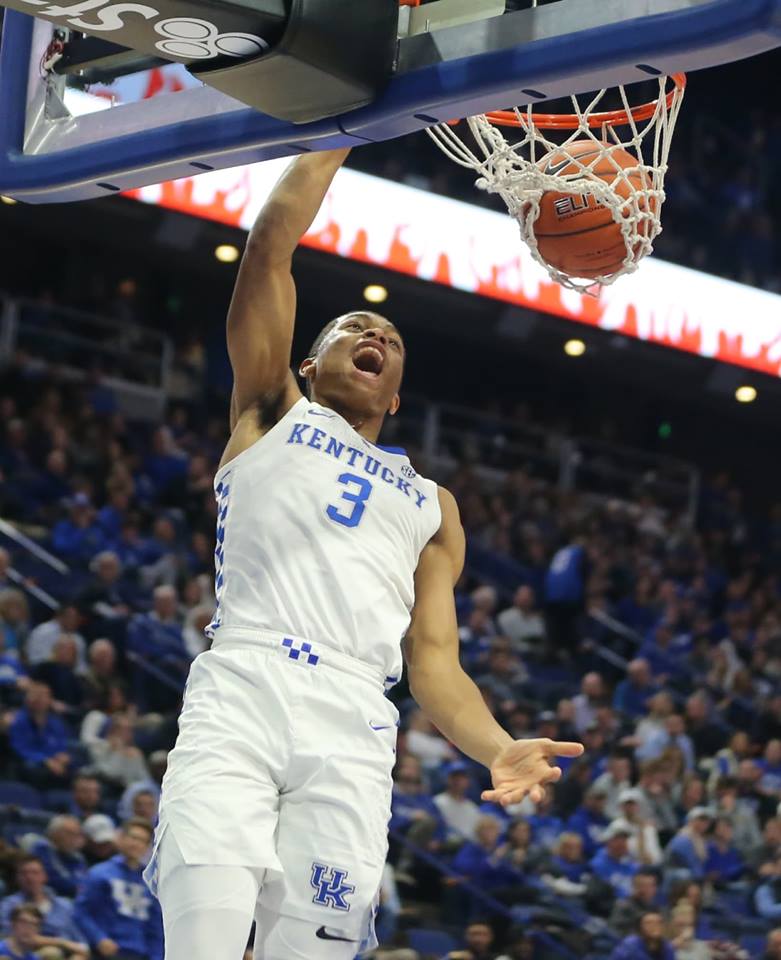 The Kentucky Wildcats took a huge fall in the College AP rankings this week dropping from #2 to #10. The Wildcats came in 1-1 on the season and were looking to improve that as they took on the North Dakota Fighting Hawks tonight in Lexington, Kentucky with a 9 PM Eastern Time tip off. The Wildcats really need to look to get Tyler Herro going and get more out of PJ Washington. Nick Richards is coming off a huge game with 19 rebounds and was two points shy of a double-double. Immanuel Quickley is coming off a good game as well, as his jump shot started to fall. This could be a good sign mentally going forward, as Kentucky really needs to improve their guard play. The Wildcats are averaging 17 turnovers per game coming into tonight. North Dakota comes into this game 2-0 after joining the Summit League this year. The Hawks are led by Seales, who averaged 10.7 points per game last season. Not far behind, they also return Avants who averaged 11.6 points and six rebounds per game last season.

Kentucky came out a little flat yet again, getting down 5-1. Tyler Herro had a nice mid-range jumper to get him going early, after not getting in the scoring column last game. Reid Travis went on a nice run by himself contributing for seven straight points on three consecutive Wildcat possessions. Kentucky came out not defending the three-point shot, allowing the Hawks to start the game 2-4 from deep. Tyler Herro came down on a fast break and goes up strong on a contested layup to get the And-one and completed the free throw to put the Cats up 22-16. PJ Washington scores five straight points on two straight possessions with a three-point attempt and a nice contested mid-range jump-shot. Tyler Herro looking a lot more aggressive tonight going up with another strong take at the 10-minute marker to get fouled. Tyler completed both free throws to give him seven points and to put the Wildcats up 29-16. At the 7:40 mark, Nick Richards got called with an offensive foul and appeared to have hurt his ankle, as he limped off the court with the Wildcats up 32-18. Keldon Johnson had a nice dunk on a transition break that brought the not so crowded BBN to their feet.

Going into the half, Kentucky came out with more energy to start the game than the two previous games. Kentucky looked a lot better on defense, forcing the Hawks to 13 turnovers. However, they still struggled to defend the three-point shot, as they allowed the Hawks to go 5-13 from deep. The Wildcats out rebounded the Hawks 20-10 and looked to get the ball out in transition and push. It was good to see Tyler Herro and PJ Washington going, which is what Kentucky needs to be competitive. PJ Washington finished the first half with 10 points and Tyler finished with 9. Kentucky pulled away in the first half putting the score to 46-25.

Early in the second half, Herro scored five points in a row, including a break-away dunk in transition and a transition three pointer giving him 14 points to put the Cats up 57-32 with 16 minutes remaining in the game. I think the biggest key for Kentucky is to get Herro going, he is a legal threat on offense that Kentucky really needs and the go-to guy at the end of a game. Kentucky’s height and length on defense pushed the Hawks to start their offense deeper on the floor and led to bad passes and their post players catching the ball too far away from the basket, leading to contested and fadeaway shots. PJ Washington continued to look good as he made a tough, contested left hand lay-up around the 14-minute mark giving him 15 points and putting the Cats up 62-34. The next Kentucky possession led to a PJ Washington fast break dunk off a steal from Hagans. As the second half was winding down, Kentucky was running through their offense, and got good looks. The final score ended up being 96 to 58 with Kentucky coming out with the victory.

Kentucky improved their record to 2-1 on the season and look to pick up another win Sunday, as they take on VMI at Rupp at 6 PM. It’s still extremely early in the season, with it being Kentucky’s third game, but Kentucky looked the best it has all season tonight. Kentucky still turned the ball over tonight, ending the game with 13 turnovers. Kentucky outrebounded North Dakota 45-15. Kentucky was led in scoring by PJ Washington who ended up with a career high 25 points, going 4-5 from deep. Keldon Johnson who came down with 10 boards, recorded a double-double on the night. The North Dakota Fighting Hawks took their first loss on the season tonight in Lexington but look to continue the good 2-1 start on the season as they take on Minnesota-Morris this Saturday. The Hawks were led in scoring by Avants with 14 points and rebounding by Rebraca who came down with 6 boards on the night. The big take-aways from this game was that Tyler Herro and PJ Washington really got it going for the Wildcats and looked a lot more comfortable tonight. Keldon Johnson continued to play good tonight and with a lot of heart as he finished with 12 points and 10 rebounds. On the downside, Ashton Hagans continued to struggle as he didn’t make it into the scoring column, until late in the game with an open layup.

In the post-game press conference, Calipari said he will not accept what they want to give because that’s unacceptable. Calipari believes that EJ Montgomery has to get more minutes because he can make something into nothing. Coach also compared Tyler Herro to Jamal Murray mentioning how he was coming off picks slow and he’s to used to elevating over players to get his shot off and he cannot do that here. Coach said that he forgets how hard it is because all he remembers is the end of last year and then he realizes where they are now and it’s going to be hard and the same thing happens every year. Calipari said that he isn’t expecting PJ to extend his game deep like tonight, but he is allowed to shoot it. He also said that he was disappointed in Nick Richards because they spent the last two days blocking out and he had 19 rebounds last game and only had 2 rebounds tonight. The turnovers are still coming from the big guys mostly and Calipari believes it’s because they aren’t used to having to come to a stop on their way to the rim, and they are going to have to do drills to get them more comfortable.