College Football – Cards Fall to Kentucky in a Thriller 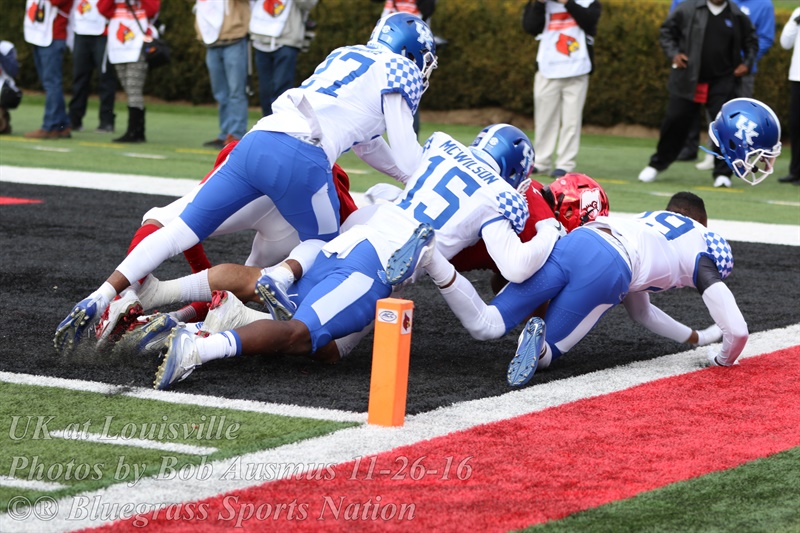 Rivalry games can bring out the best and the worst of teams.  Today’s game pitting No. 11 Louisville verses unranked Kentucky was no different.  Favored to lose by 26 points, the Wildcats pulled off the improbable 41 – 38 upset with the help of 581 yards of total offense and four Lamar Jackson turnovers.

Everyone know U of K could run the ball, having two 1,000 yard rushers on their team.  However, most did not know that the pass would be the think that propelled their offense.  After Jackson and the Cards marched down the field on the opening drive in just over two minutes for a touchdown, U of K needed only one play to tie the score.  Quarterback Stephen Johnson threw a 75 yard touchdown pass to Garrett Johnson.

U of K then got the ball back and scored on a Stanley Williams 35 yard touchdown run to put the Wildcats ahead 14 – 7.  Williams had 63 yards rushing on the day.

The Cards then got rolling in the second quarter on the arm of Jackson.  He threw a beautiful 18 yard touchdown to Reggie Bonnafon who was able to keep both feet in to tie the score.  Blanton Creque then put the Cards ahead 17 – 14 with a 19 yard field goal.  Then Jackson shoveled the ball to Cole Hikutini who rolled to the end zone for a 24 yard score putting the Cards ahead 24 – 14.

Things were looking good for the Cards, but it would not last long as the deep ball got them again as the Johnson-to-Johnson connection connected again, this time for a 63 yard score to pull within three at the half.

The Cards had a chance to go up by ten just before the half, but a bullet thrown from Jackson to James Quick from 43 yards out went right through Quick’s hands in the end zone.

Both the Cards and the Wildcats scored to open the second half.  Benny Snell Jr. ran 18 yards to put Kentucky ahead 28 – 24.  Jackson then used his legs to put the Cards in scoring position by running 61 yards down the Kentucky 14 yard line.  Four plays later Jeremy Smith scored to put the Cards back in the lead.

U of K then started the fourth quarter with a 35 yard touchdown pass from Johnson to Dorian Baker to put them ahead 38 – 31.  Johnson finished with 338 yards passing and three touchdown passes.  It was Johnson’s most yards passing in a game this season.  He had only had one other 300 yard passing game early in the season against New Mexico State.

Jackson’s one yard run tied the score at 38 on a one yard touchdown run.  Jackson, the heavy Heisman favorite coming in to the game, looked as if he was ready to seal the deal.  However, the last two minutes may have opened the door for someone else to challenge him.

With 5:42 remaining, Chris Williams forced a Bennie Snell Jr. fumble at U of L’s 45 yard line.  Jackson and the Cards had a first and goal at the U of K nine yard line with 1:45 remaining.  The Cards came into the game leading the nation in fumbles by a wide margin would be plagued again.  Jackson, trying to make a big play, fumbled the ball when the ball popped out as his hand hit the ground.  Kentucky recovered the fumble and then drove down for the game-winning field goal by Austin MacGinnis 47 yard field goal.  Bobby Petrino discussed Jackson’s fumble and what should have happened, “What he needed to do right there was hand the ball off and trust his teammates.  Hand the ball of and let them make the play.  That is exactly what his read told him to do. And then he just tried to do too much and turned the ball over.”

Jackson finished the game with 281 yards passing and 171 yards rushing.  He passed and ran for two touchdowns each bringing his total for 51 touchdowns.  He also became only the sixth player in FBS history with 20 touchdowns passing and 20 rushing.  However, the three interceptions and the costly fumble may have opened the door for someone to come in and steal the Heisman.

Jackson was asked what he would tell his teammates as they head into their Bowl preparations.  He said, “You know you can’t look at it. This loss was going to be hard, that’s our rival. Our season didn’t go out right but we have to make up for with our bowl preparations I’m just going to tell them, ‘move past it’.”

The loss against Houston last week knocked them out of the playoff hunt and the loss this week may move them to a lower tier bowl depending on what happens with Florida State and Virginia Tech.  The Cards now stand a 9 – 3 on the season while the Wildcats improved to 7 – 5.