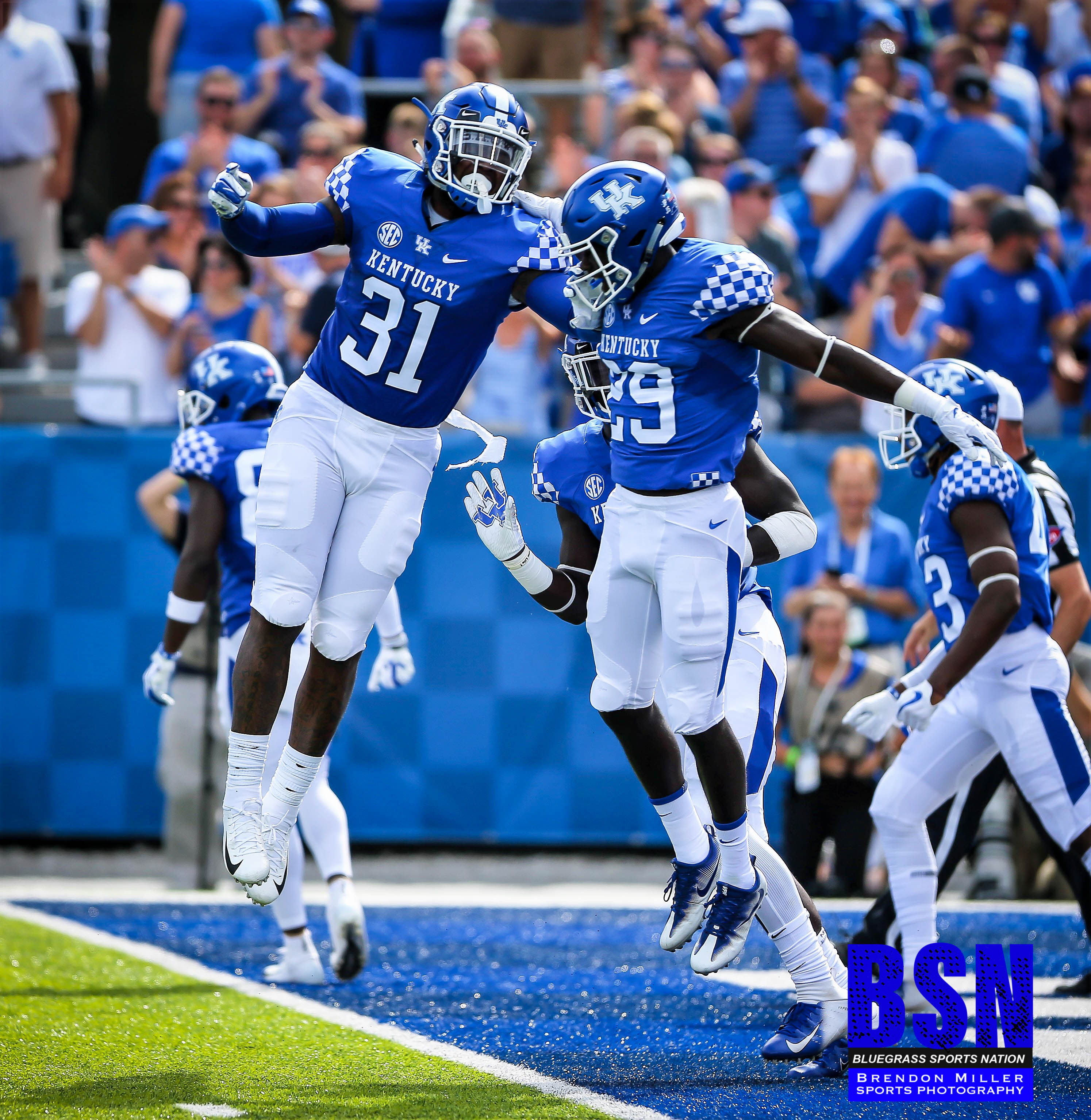 “Touchdown” Terry Wilson has been the talk of the University of Kentucky Wildcats. Just a sophomore, was given the reigns of the Wildcats Offense. After less than a half of play, Terry Wilson has given Big Blue Nation cause for concern as he hasn’t been very productive. Wilson appeared to get injured and was subbed out after producing 3 turnovers. All 3 turnovers resulted in points for the Central Michgan Chippewas. The Wildcats’ offense seen the emergence of redshirt freshman running back Asim “AJ” Rose in the first quarter. Asim Rose gave Benny Snell a breather and on his first carry of the game busted a 55 yard touchdown run. Snell would match Rose with a 52 yard touchdown run of his own in the 2nd quarter. The Wildcat’s would finish the half rushing the for 160 yards on 18 carries.

Coach Stoops turned to Gunnar Hoak a 6’4 sophomore from Dublin Ohio. Hoak breathed life into the big blue nation driving the cats 71 yards on 6 plays in 41 seconds. The Cats scored on a 24 yard laser from Gunner as he connected with David Bouvier for their first career touchdown at UK.

Defensively the Cats played well in the first half only allowing 158 yards. Led by Eastern Kentucky native Kash Daniel the defense was put in some precarious situations due to the turnovers. The Cats also had a targeting call against Chris Westry on a 3rd and long that resulted in his ejection on the play. The Chippewas would eventually score on that drive from 4 yards out. Even with the great play on the defensive side of the ball the Wildcats still allowed 20 points. UK took a slim lead into the half, up 21-20.

Coming out of the half what adjustments would Coach Stoops and company make? Will Hoak remain the quarterback for the Cats? Will Touchdown Terry live up to his name or will he now be known as “Turnover Terry?” Was the touchdown by Asim Rose a fluke or do the Wildcats have a complementary running back for Benny Snell? We would get answers to all of these questions from the very first snap of the second half.

Gunnar Hoak started the second half at quarterback. When asked if he considered starting Gunnar for the remainder of the game, Coach Stoops said, “Terry was ready to play at the start of the second half, and Gunnar deserved the opportunity to go back and play for what he did at the end of the first half there. And I’m glad. In a way, I mean obviously we don’t want anybody to get hurt, but to be forced into that situation, see the way Gunnar responded, and the way he played says a lot about him, like I mentioned, and then to come back in the second half—and now you gotta do the same thing with Terry. You gotta get him back in and let him get acclimated to the game and the speed of the game and get some positive energy going for the season, and so it worked out very good.”

Gunnar was unable to move the ball down the field on two consecutive drives to start the 3rd quarter. The Wildcats went 3 and out on both of those series. The inconsistent play opened the door for Wilson to get another shot at being the signal caller. Wilson on his first possession of the second half led the Cats on a 3 play 40 yard drive which was capped off by a Benny Snell 11 yard touchdown run out of the “Wildcat Formation.” The Wildcats extend their lead over the Chippewas 28-20.

The Final Score would come from Benny Snell’s roommate Asim Rose who out of the “Wildcat Formation” punched it in from 4 yards out making the score 35-20 with 14:53 seconds left in the game. The tandem running backs combined for 229 yards rushing on 28 carries. When asked about what the emergence of Rose means to this team, Snell stated, “That’s my roommate, and now everybody knows him.”

Game planning for Benny Snell was hard enough. Now that opposing defenses have to game plan for both Snell and Rose, that’s a defensive coordinator’s nightmare. If the Cats can get solid play from their quarterback position they will be dangerous offensively going forward.

Defensively, this team is faster and more athletic. Coach Stoops before the season started called this unit the best defense he has had at UK. I asked Coach Stoops after the game, “ Courtney Love not being there, Kash Daniel has stepped in. How much has his leadership and the fact that he sat behind him for the last two years really contributed to his leadership on the field?” Coach Stoops replied, “ Yeah, I think it’s a big part of it. He had a great guy to watch and play behind, and Kash has a lot of those characteristics himself. And I thought the comnination of that is a big deal. And you know Kash is a guy that’s hard not to root for. He’s a Kentucky Guy. He cares about this program. He’s passionate. He plays extremely hard. Very unselfish. For those years he was sitting there behind Courtney, didn’t say a word. Just what can I do to help, how can I help on special teams and just learn his position. And that’s what I told the guys in there. The young guys gotta understand that and learn that. We have a great example of some older guys that have paid their dues and worked on it, and we have very good leadership on this team. So I’m excited and we’ll get some guys in gear and get them going.”

Kash Daniel who grew up in Paintsville, KY is in his junior season as a Wildcat. Kash lead the Wildcats in tackling against the Chippewas with 11 total tackles and hurried the quarterback on two other plays. After the game I caught up with Kash and asked him about the improvement that this year’s defense has from last year, and what does he think contributes to that. Kash responded, “I think it’s comradery, and a bond we have with each other and umm, we come to practice and meetings every day, and to know that we are on a mission, and we are here to get better each and every day. I think the guys have the same approach, you come in and good things will happen.”

Good things did indeed happen as the defense pitched a shutout in the second half. The only real blemish that the defense had was on a 3rd and 14 in which Chris Westry was flagged for targeting a defenseless player. That resulted in an automatic first down and eventually set up a 4 yard touchdown run for the Chippewas. Coach Stoops talked about that play after the game. “If we’re a little more aware of the situation on third and 14, you know and get the targeting call, we’re off the field, just momentum, the whole deal. We gotta be aware of the situation, down, distance, and what you’re getting into there. But yea, other than that long drive on the defense with, again, could have been stopped on that penalty, I was proud of the way they played.”

The Wildcats finished with 299 yards rushing on 43 carries. They added 128 yards on 15 of 27 passing. The Cats ran 70 plays for a total of 427 total yards. They did turn the ball over 4 times in which 3 of those turnovers led to points. If the Wildcats want to beat Florida next week they will need to eliminate those turnovers.

Defensively the Wildcats only allowed 255 yards of total offense with 158 of them coming in the first half. The defense through week one at least, have lived up to Coach Stoops billing. Next week is a totally different animal as the Cats will travel to the “Swamp” as they hope to keep the momentum on their side. As always stay tuned to all your Kentucky Wildcat coverage by liking our facebook page, and visiting our website at www.bluegrasssportsnation.com