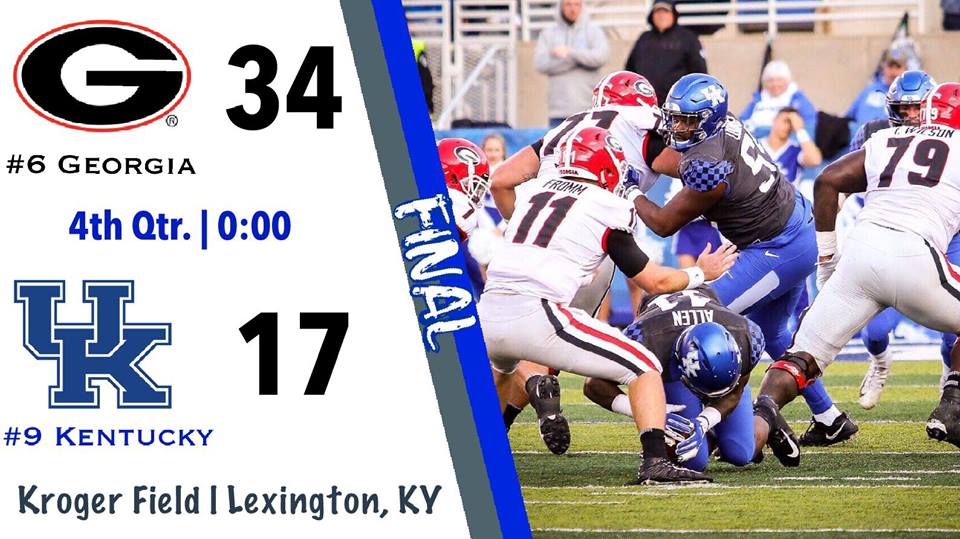 The setup for a historic night for Kentucky Football was perfect. The weather was beautiful, Kroger Field was packed, and SEC Nation was in town. However, the Georgia Bulldogs had other plans for the Wildcats. With the SEC East Championship on the line the Bulldogs ran their game plan better than the Wildcats and won 34 to 17.

Georgia took some of the air out of the stadium by stopping Kentucky’s first drive of the game and returning the punt 65 yards. Georgia went on to score on that drive to put up the first points of the night. Kentucky’s offense was better than the last few games. Even though they only scored three points at halftime, the Cats were able to move the football. At halftime they had 133 total yards with Terry Wilson passing the ball 9 for 11 with 66 yards of his own.

Kentucky’s inability to score points was mainly to blame on not rushing the football well. The Cats only rushed for 84 yards in the game. Benny Snell was nowhere to be seen in the second half, until a late third quarter touchdown. Snell only rushed for 73 total yards with 61 of those happening in the first half. Benny did, however, become the first player to rush for 1000 yards per season in their first three seasons at Kentucky.

The Wildcat’s defense was also absent most of the game. The Bulldogs gained 444 total yards and scored more than double what UK were allowing prior to this game. Josh Allen, while not having the best night tackling with only 3 total tackles, he did recover two fumbles. Where Kentucky struggled the most was defending Georgia’s rushing. The Bulldogs rushed for 331 yards and were led by D’Andre Swift with 157 yards of his own.

Even though the night didn’t go as plan, Kentucky still have a great chance of winning 10 regular season games and going to one of the bigger bowl games. A trip to Knoxville is next for the Wildcats as they will face the Tennessee Volunteers and try to bring home a victory for the second year in a row.