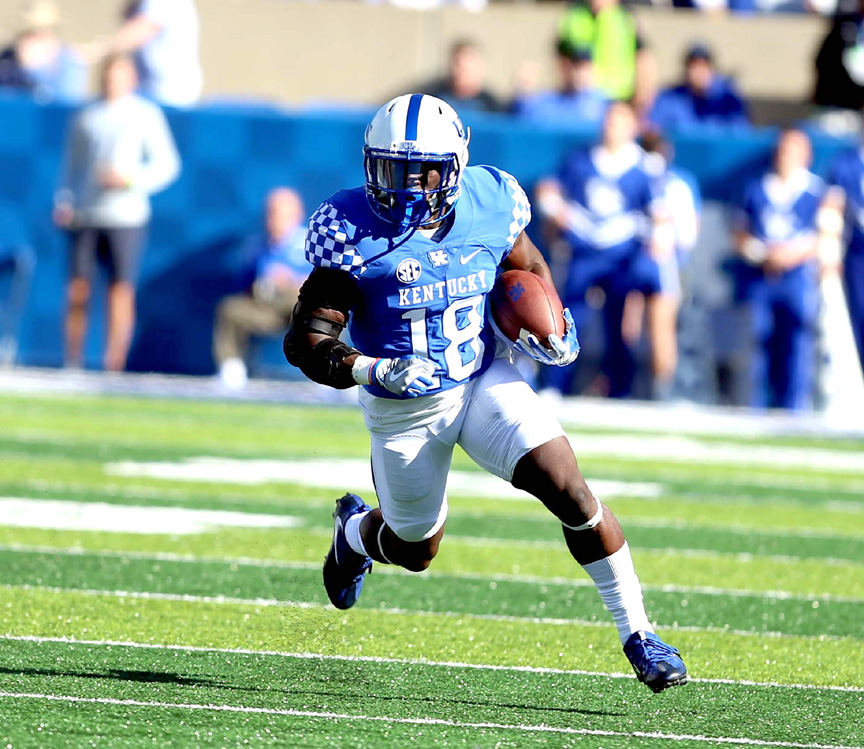 Are you looking for the perfect conversation starter at your annual Christmas party this year? Are you tired of all the Trump talk at holiday family get-togethers? Scared of gossiping about your boss around the water cooler at work? Fear not—read my column and you’ll have the perfect “go to” topic for all those stodgy occasions. How better to warm up the coals of discussion than to blurt out “How ‘bout them football Cats”? Arm yourself with all the forgotten scores, misleading statistics, and meaningless anecdotes that I’ve recounted in the following paragraphs and you’ll be the life of the party. You can thank me afterwards.

A day after UK’s matchup with Georgia Tech in the TaxSlayer Bowl was announced, I asked Coach Mark Stoops if there was a specific defining moment during the season when he knew his team was going to finish so strong. “No, I don’t think there was any one,” he replied. “I can’t point to any one meeting or practice or game, no. I think it was just staying steady and knowing the pulse of the team and knowing the pulse of everyone in our building.”

That may just be “coach speak” on his part, but from a fan’s perspective, I can think of numerous situations where this past season pivoted precariously—rising to dramatic heights and plummeting to perilous depths like a slick-railed Kings Island roller coaster. With that said, let’s conduct a seasonal review listing the 5 greatest highlights together with the 5 worst lowlights of this watershed year.

We’ll get the lowlights out of the way first–with the lackluster start against Austin Peay representing lowlight #5. If you remember, Kentucky didn’t begin playing against the overmatched Governors until midway through the second quarter. For a game against a winless opponent that would have given the Cats bowl eligibility, falling behind 13-0 raised the eyebrows of many a cynic. Nobody really thought Kentucky would lose, but the familiar strains of sarcasm and negativity were widely circulating throughout the building. To UK’s credit, they finally woke up, rallied and won handily 49-13.

Lowlight #4 would have to be the injury to Drew Barker. Prior to the season, many experts indicated that the success of the entire season would ride on the shoulders of the redshirt sophomore quarterback. Together with a slimmed down Matt Elam anchoring the defense, the duo was anointed as the heart and soul of this team. Team fortunes took a big nosedive as Barker sustained his back injury early in the Florida game and Elam never really got off the snide. Without those two having breakout years, the general consensus was that Kentucky had no chance.

Lowlight #3 goes to the UK defense in their hideous performance against the Tennessee Volunteers in Knoxville. Despite their teammates on the offensive side of the ball racking up an impressive 635 total yards, Wildcat defenders were gashed for 599 total yards by their big orange rivals. Quarterback Joshua Dobbs single-handedly torched UK for 147 rushing yards, 223 passing yards and 5 touchdowns as Tennessee embarrassed the Cats 49-36. Earlier in the year, ESPN analyst Lee Corso dubbed D.J. Eliot’s defensive unit as the worst defense in division I football. They weren’t literally the worst, but they were pretty darn close.

The 45-7 thrashing by the Florida Gators qualifies as lowlight #2. The demoralizing defeat left the Wildcats with an 0-2 start and a sense of hopelessness among the ranks of BBN. Serious and legitimate questions about Coach Stoops and his ability to succeed were bandied throughout the sports talk airways. Discussions about contract buy-outs, coaching ineptitude, and replacement candidates polluted the program like rotting fish on a sinking cruise ship.

Of course, lowlight #1 has to be the season opening loss to former offensive coordinator Shannon Dawson and his Southern Mississippi Golden Eagles. The fear was that losing to the man who UK fired just one season ago would be absolutely devastating, sending the rest of the season into a hopeless tailspin. As had happened so many times in the past, the Cats jumped out to a big lead, faded down the stretch and snatched a 35-44 defeat from the jaws of victory. Few would have thought that any sort of magical turnaround was even remotely possible.

But something somewhere along the line clicked and the turnaround began to take shape—perhaps at highlight #5—with the loss at Alabama. It’s not usual and customary for a loss to be classified as a highlight but we’ll make a definite exception here. Coming off two hard-fought wins against New Mexico State and South Carolina, Kentucky headed into the Alabama game just hoping to avoid injury and embarrassment. Suddenly, the Wildcats found themselves leading the #1 ranked Crimson Tide early in the ballgame and ended up playing them quite competitively before ‘Bama finally prevailed 34-6. Afterwards, Tide Coach Nick Saban told reporters that Kentucky was much better than everyone thought and several Alabama players claimed that UK was one of the more physical teams they faced. This game essentially validated the progress Kentucky was making and gave the players the confidence they needed to keep competing in the brutally difficult SEC.

Highlight #4 would be the gradual emergence of Stephen Johnson at quarterback and Benny Snell Jr. at running back. Who would have thought that a skinny “California cool” junior college transfer and an unheralded freshman from Ohio could suddenly spearhead a surprisingly revamped and suddenly potent offensive attack. Johnson’s accuracy with deep throws and Snell’s hard-nosed vertical running style played havoc with many a defensive scheme. Kudos to Offensive Coordinator Eddie Gran for dumping the air raid in exchange for a much more balanced philosophy in accordance with the personnel at his disposal. Mitch Barnhart better “pony up” to keep this guy in town.

Highlight #3 goes to Austin MacGinnis and his late game heroics against Mississippi State. His game winning 51-yard field goal as time expired broke UK’s seven game losing streak against their western division rivals. The 40-38 victory represented not only a “must-win” but also perhaps a “program changing” win for the entire team, as a glimmer of bowl eligibility crept back into the minds of players and fans alike. A loss at that point in the season would have crushed any momentum, sending the Cats spiraling back toward conference irrelevance.

Road wins in the SEC are few and far between in the Mark Stoops era, so highlight #2 is UK’s road win at Missouri. The Cats came ready to play, jumping out to a big lead and dominating the Tigers on both sides of the ball in the 35-21 win in Columbia. After this victory, talk of actually winning the SEC eastern division began to circulate, as long-suffering Wildcat fans dreamed of an improbable December date in Atlanta. Of course the dreams were short-lived as the Georgia Bulldogs broke the heart of BBN the very next week with their own version of a last second field goal (honorable mention lowlight).

Highlight #1 should be unanimous—it’s the 41-38 victory over Louisville at Papa John’s Stadium in the regular season finale. Stephen Johnson played a nearly perfect game at quarterback and Austin MacGinnis once again played hero with a last second kick into the gut of Cardinal Nation. Upsetting your bitter in-state rival with their Heisman Trophy candidate on their home field when they’re heavily favored qualifies as a beautifully scripted storybook ending to a magical season.

But, not so fast– the season isn’t quite over as Stephen Johnson, Benny Snell, Boom Williams, Jordan Jones, Jon Toth, Jojo Kemp, Ryan Timmons and company search for one more seasonal highlight as Kentucky goes bowling for the first time in six years. Some would say that win or lose, the season is already a success. Others would claim they’re playing with house money and the game against the Yellowjackets doesn’t really matter. Au contraire, mon fraire. I say the Cats will FINISH STRONG, they’ll NEVER FLINCH, and they’ll KNOCK DOWN ANOTHER DOOR on the way to their eighth victory and a possible year-end national ranking. Even Coach Stoops would classify that as a defining moment for the UK program. It’s been a heck of a roller coaster ride. See you in Jacksonville! You’re welcome.

If you enjoy my writing, please continue to visit me at www.huangswhinings.com and follow me on Twitter @KYHuangs