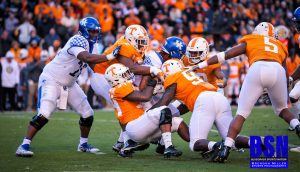 With a ten-win season still alive the Wildcats headed down to Neyland Stadium in Knoxville to battle the Volunteers in the 114th meeting between the two teams. The series has been historically dominated by Tennessee, but Kentucky was looking to win their second straight against the Vols. Tennessee, however, had other plans. The Vols had their way with the Cats from the first play to the last and won with a final score of 24-7. It was a game that everything went wrong for the Cats including blocked field goals, interceptions and fumbles.

The first half was a disastrous one for Kentucky. Which included only 68 total yards and a last second Hail Mary pass completion that sent the Volunteers into locker room with a 17-0 lead. Kentucky’s defense allowed 241 total yards for the half and fell victim to every long pass. The offense didn’t help hid any faults in the defense. Even though they possessed the ball for 4 minutes longer than Tennessee they did little with the football. The longest plays of the half were 2 pass plays for 9 yards each.

Kentucky’s poor performance continued in the second half. Kentucky’s only score of the game came with 1:56 left in the third quarter on a 19-yard pass to C.J. Conrad. Conrad was again underutilized, targeted only one other time the rest of the game. He is the only Kentucky player that had a good performance. The offense had three turnovers. Terry Wilson had 2 turnovers (fumble, interception) 172 yards passing and -6 yards rushing on 10 attempts.

Tennessee dominated Kentucky’s defense gaining 412 total yards for the game compared to Kentucky’s 262 yards. The biggest disparity was in rushing yards. The Vols were able to gain 215-yards on the ground while the Cats only managed to gain 77 total rushing yards.

Kentucky will take on Middle Tennessee at 12:00 on November 17th before ending the regular season at Louisville the following week. The Wildcats still have a chance to get 9 wins this season and get invited to a good bowl game. Let’s hope they finish better than they performed the last two games.