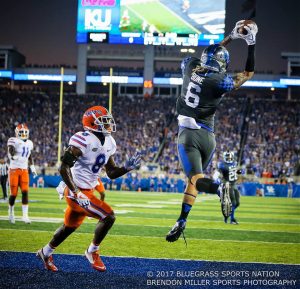 After a mediocre performance in their opening game against CMU, Kentucky is headed to the swamp to face the Florida Gators this Saturday (7:30 on SEC Network) in the first SEC game for both teams. Florida has beaten the Wildcats 31 consecutive times–it is the longest in-conference streak in SEC history and is the longest active streak in Division I football. The streak casts a shadow over this game every year; however, 3 of the last 4 meetings have been decided by six points or less. Let’s look at how these teams performed in their first-week matchups:

It was a tale of two halves for Kentucky. In the first half the Wildcats were plagued with 4 turnovers, forcing Coach Stoops to take out Terry Wilson and replace him with Gunnar Hoak. Together, the quarterbacks passed for only 128 total yards. However, the rushing was terrific. Before the season started we didn’t know if there would be a player to step up when Benny Snell needed a rest. During the game Saturday we discovered that Asim Rose could be that player. He gained 104 yards on eight carries (13 average) and had two touchdowns. On the defensive side of the ball Josh Allen and Kash Daniel both played excellent games, combining for 11 solo tackles. The defense didn’t allow CMU to score a point in the second half.

Florida handled business in their lopsided win against Charleston. The Gators scored 53 points while not allowing CS to score until 6 minutes left in the fourth quarter. Even then Florida blocked the extra point and ran it back 98 yards for a touchdown. The Gators moved the ball well. They had 444 total offensive yards resulting in 25 first downs. Their quarterback, Feleipe Franks, threw for 219 yards and had 5 touchdowns. They had positive rushing plays by nine different players for a total of 203 yards and one touchdown.

As a Cats fan, it is embarrassing to have lost to a team since Matlock debuted on TV. To win this game there are a few things they must do better than in their first game against CMU. Above all, they must take care of the football–we cannot afford to give the Gators the football on a short field. Secondly, we need to cover the receivers. Florida’s quarterback scored five touchdowns in their first game and can pick teams apart. Lastly, and perhaps most importantly, a quarterback must step up. It doesn’t matter which, but we cannot rely on Rose and Snell to gain all the yardage.

This year Kentucky matches Florida’s talent better than they have in quite some time. It has been a narrow victory 3 out of the last 4 games and the streak will inevitably end sometime. Give me a Kentucky win 38-35 and meet me on State Street.