Two Rounds Down in Lex-Town 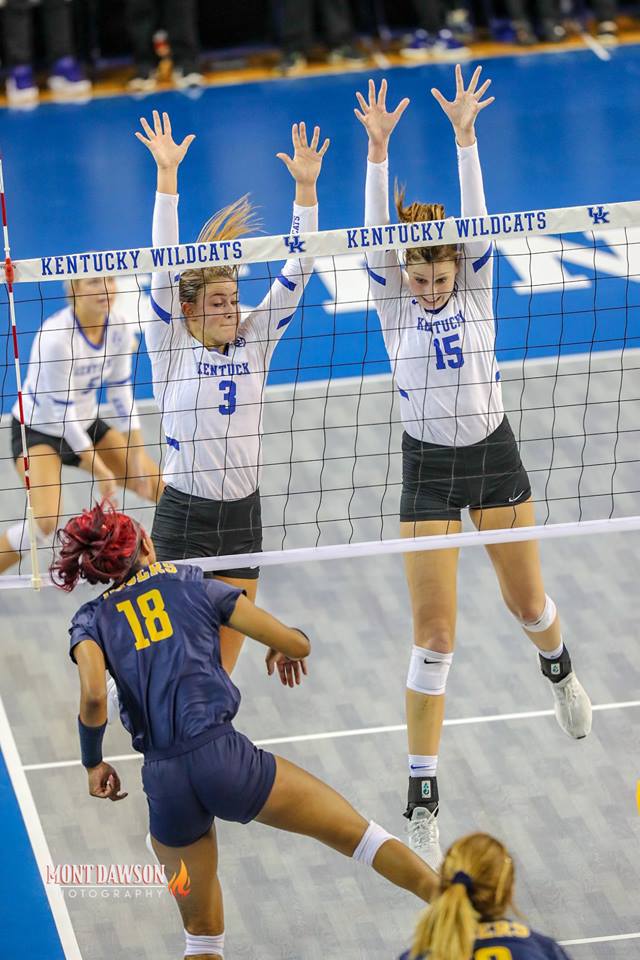 NCAA Division 1 volleyball tournament came to Lexington this weekend for the first two rounds before heading into regionals! Due to the CATS marvelous undefeated run in their SEC conference this season, and their 23 game winning streak, they earned the right to host the fist two rounds in Lexing-town! Wow! What a weekend to be a CATS volleyball fan!

The opening game was the Purdue Boilermakers and the East Tennessee State University Bucs!  A very exciting first set as the smaller, more scrappy Bucs came to play!  Falling short in the end of set 1 the Bucs proved to have given all they had to the much stronger, more athletic, and taller Boilermakers!  The Boilermakers took set 1, and behind a massive array of shoot attacks, and some stellar defensive play they bombed the Bucs only allowing them to score a very few points in set 2!  Set three much the same way, as the Boilermakers where just simply too much, but hats off to the Bucs for proving the small school belonged in the BIG DANCE!

On to the second match of the opening night, your CATS took the floor and did it in dramatic fashion, as the BBN was loud and proud, the CATS were pumped and very intimidating in warmup drills!  Their opponent would be a team not too far down the road in the Murray State Racers!  The Racers were much like ETSU in their small stature, but their athleticism more than matched most teams despite the smaller stature!  They were incredibly athletic, as well as incredibly talented!  We witnessed the Racers pushing the CATS in set 1 all the way to the end of set 1 until OH 6 rotation player, Ali Stumler, got going offensively and was putting down Kills from the left pin, and back row pipe, as well as tossing in 16 digs on the night!  They also got great offensive play from Middle Hitter Brooke Morgan as she ran the slide to perfection all night long!

The CATS then battled some out of system woes in set 2 and 3 but was able to regain their composure, as setter Madison Lilley was paramount in leading her team with the most astute routes of attack!  Set 2 and 3 came and went and the CATS were advancing on to round two, taking on the Purdue Boilermakers, with some fantastic play by libero Gabby Curry, and SEC player of the year, and Kentucky girl (Paul L. Dunbar High School) Leah Edmond!  The CATS as always found themselves with a balanced scoring attack, which shows their leadership, and their willingness to work together to accomplish their goals!

As the night came to an end, Ali Stumler, and Leah Edmond talked in the press conference about how each member of the team had some sort of “alpha-dog” in them, but each member used that trait to better the team!  Coach Skinner pitched in that this team was so resilient in all their ways, and were most likely the best team he had ever seen at fighting through adversity, and finding ways to get back on top!

All things quite in Lexington the remainder of the night, but not for long! The town slept, but just for a minute, as the Purdue Boilermakers were waiting to derail our CATS on our home floor in just a matter of hours!  Boy, were they fooling themselves!  The CATS came to play, and they did just that!

From the first serve to the last, it was ALL CATS, ALL NIGHT!  Again it was a balance of attacks from the entire team, while adding in some bench scoring from the service line by McKenzie Watson (Assumption High School), and Meredith Jewell (Mercy Academy High School)!  Two Kentucky homegrown kids pitched in their talents to drive the CATS to the regionals to play Nebraska which will be a rematch of the NCAA tournament last season, where the cornhuskers eventually went on to win the National Title!

The CATS vs. Nebraska game will take place on Dec. 7, and the CATS will have revenge on their minds, as the Boilermakers, and Racers are behind them! The CATS are highly talented and very skilled, possessing exactly what it takes to make a run at the School’s first ever NCAA National Title! From talented, tall, athletic, strong Pin hitters, three great middles, a vast array of defensive players, and of course it would not be a fitting article, if I did not mention the fantastic play, and leadership Madison Lilley shows each and every night !

Madison is probably the best all around volleyball player that I have ever witnessed, as there is no part of the game that she cannot play! Running an astute 5-1 offense is a difficult scheme due to the right back position, and the setter having to play defense! Also, the setter is often asked to take a Right pin swing as well at times when balls are out of system! So I must say, watching her has a huge treat; not just this weekend, but all year!

Best wishes to the CATS from Bluegrass Sports Nation the rest of the way!!!!