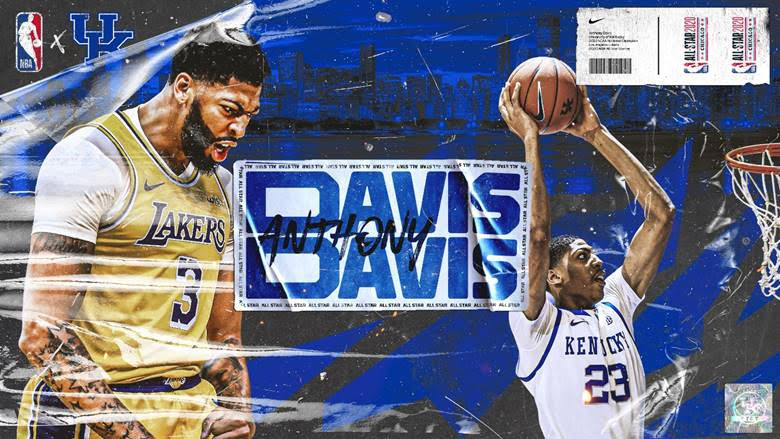 LEXINGTON, Ky. – Former Kentucky great Anthony Davis will make his seventh consecutive appearance at the NBA All-Star Game on Feb. 16 in his hometown of Chicago. Davis, who led UK to the national championship in 2012, was one of 10 starters announced on TNT on Thursday night.

His seventh appearance is the most of any Wildcat.

For the third straight year, teams for the All-Star Game will be chosen by two captains from the pool of players voted as starters and reserves. Votes were tallied from a pool of fans (50%), players (25%) and media (25%). As the All-Star starters who led their respective conferences in fan votes during NBA All-Star voting, LeBron James (Los Angeles Lakers) and Giannis Antetokounmpo (Milwaukee Bucks) will serve as this year’s captains.

The complete team rosters will be unveiled on Jan 30 on TNT.

Davis is in his eighth season in the NBA and first for the Los Angeles Lakers. He and the Lakers are off to a terrific start to the season as the Lakers are currently in first place in the West with a 35-9 overall record. Davis is among the league leaders in a number of the major statistical categories.

Already a two-time NBA Western Conference Player of the Week in 2019-20, Davis is among the midseason frontrunners for the league’s most valuable player award. He’s scored 40 or more points four times this season, including 50 on Dec. 8 vs. Minnesota.

The game will mark Davis’ fourth as a starter. He was also voted in as a starter for the 2015, 2017 and 2018 games. In 2017, he won MVP honors on what was then his home court in New Orleans. Davis scored an All-Star Game record 52 points in addition to contributing 10 rebounds. He broke Wilt Chamberlain’s previous scoring record of 42 points set in 1962.