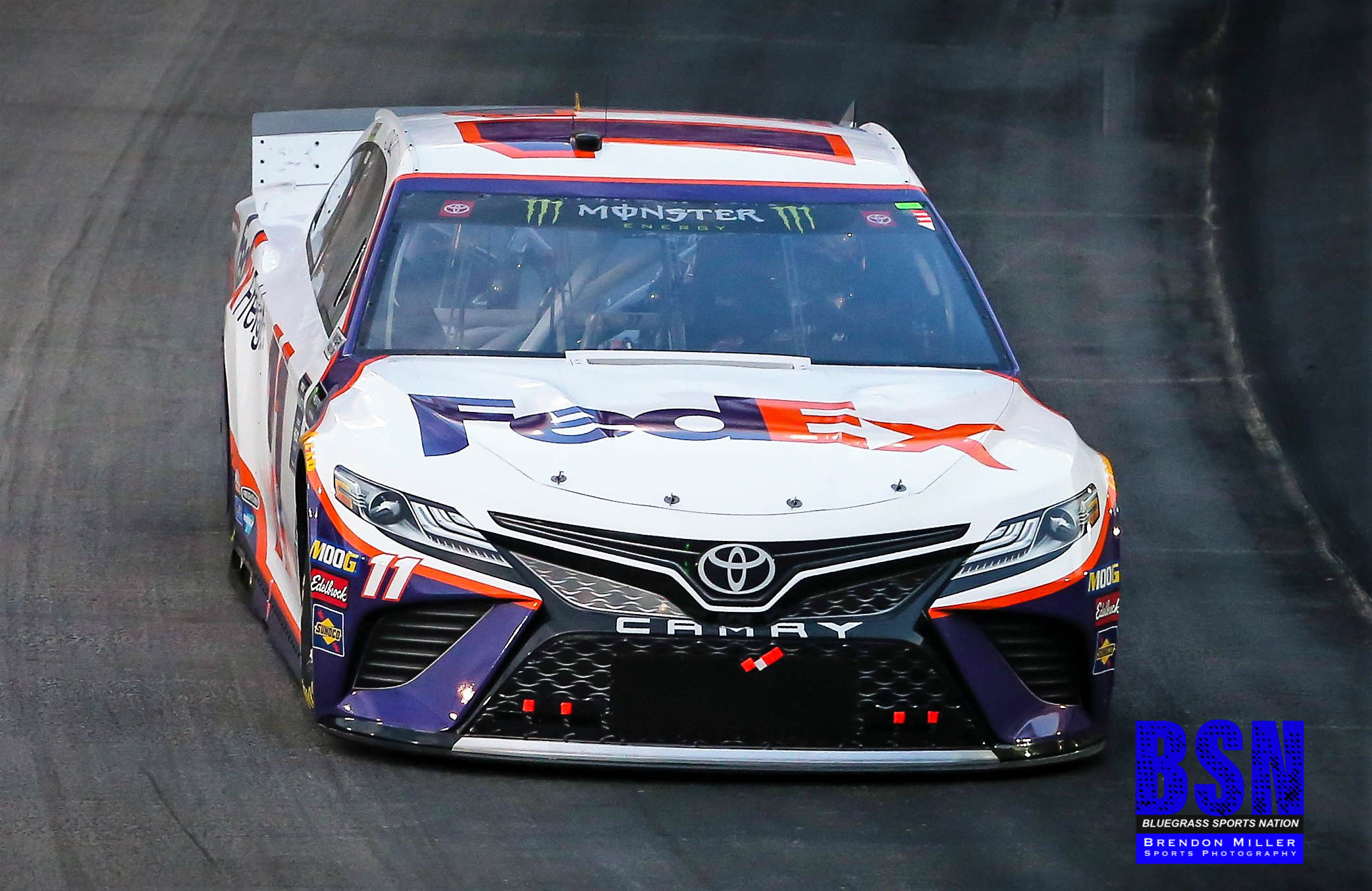 Denny Hamlin driver of the No. 11 Toyota conquers the checkers after a thrilling and grueling Daytona 500 that took two days, and overtime; and saw multiple caution flags in the final 16 laps and OT.

NASCAR Cup Series season opening race of the 2020 season traveled to the Daytona International Speedway, February 16th 2020 for the 62nd running of the Daytona 500.

Inclement Weather blanketed the Volusia County vicinity which interrupted the scheduled Sunday race at The World Center of Racing.  The stated race was postponed till Monday February 17th at 4:00 pm.

Stage 1
Pole-sitter  No. 47 Ricky Stenhouse Jr. led the opening 23 laps but couldn’t hold his advantage before he was involved in a crash which ended an expectation of a  Daytona 500 win for the  No. 24 William Byron Chevy.

This opened the door for No. 9 Chase Elliott to win Stage 1 over Cup competators No. 88 Alex Bowman as well as No. 10 Aric Almirola, No. 22 Joey Logano and No. 48 Jimmie Johnson respectfully.  Jimmie Johnson battled back from a pit-road penalty during a caution to finish in the top five.

Stage 2
Joe Gibbs Racing Driver of the No. 11 Toyota stole the show from Elliott in Stage 2, leading majority of the circuits before capturing the Stage 2 win.  Chase Elliott acquired a penalty after a pit infraction in which Martin Truex Jr. No. 19 Toyota struck Elliott’s fuel can outside of Elliott’s pit box.

Circumstances continued to favor Denny Hamlin in the Stage 2 to place Hamlin in position to battle for the victory , alongside No. 18  Kyle Busch,  No. 2 Brad Keselowski, No. 12 Ryan Blaney and No. 47 Ricky Stenhouse Jr,.

Final Stage
The Completion of the 62nd edition of the annual race at Daytona International Speedway featured the Big One occurring with less than 20 laps remaining, a multi car wreck with two laps left to force overtime, a crash on the first overtime restart, and No. 6 Ryan Newman’s car upside down and on fire as the victor crossed the finish line. Hamlin finished ahead of  No. 12 Ryan Blaney in the second-closest Daytona finish.

The Big One finally occurred and created a red flag with 16 laps remaining.  No. 48 Jimmie Johnson, No. 19  Martin Truex Jr. and No. 2  Brad Keselowski were among those involved, and  No. 18 Kyle Busch‘s chances to win his first Daytona 500 victory came to a halt with engine damage.

A wreck between No. 66 Timmy Hill and No. 27 Ryan Sorenson led to another caution and potential sprint to the finish upon a restart with four laps remaining, but No. 77 Ross Chastain attempted to advance under No. 37 Ryan Preece with two laps remaining and caused an additional confrontation that involved No. 22 Logano and No. 9 Elliott.

These events set the tone for Overtime,  for which started with a crash between No. 34 Michael McDowell and No. 14 Clint Bowyer on the first restart and ended with No. 6 Newman‘s car on its top as the No. 11 Hamlin crossing the line, collecting the win.

While Hamlin covered the headlines with the win, Newman‘s status overshadowed the scenes of celebration in the immediate aftermath.  Ryan Newman was taken directly to Volusia Hospital after removed from the carnage. BSN will comment no further on the status of Newman and will leave same to NASCAR. We pray for the healing and well-being of Newman.

It’s the third time Hamlin has won the Daytona 500.  The first driver to win back-to-back years at the Great American Race since Sterling Marlin in 1994 and 1995.