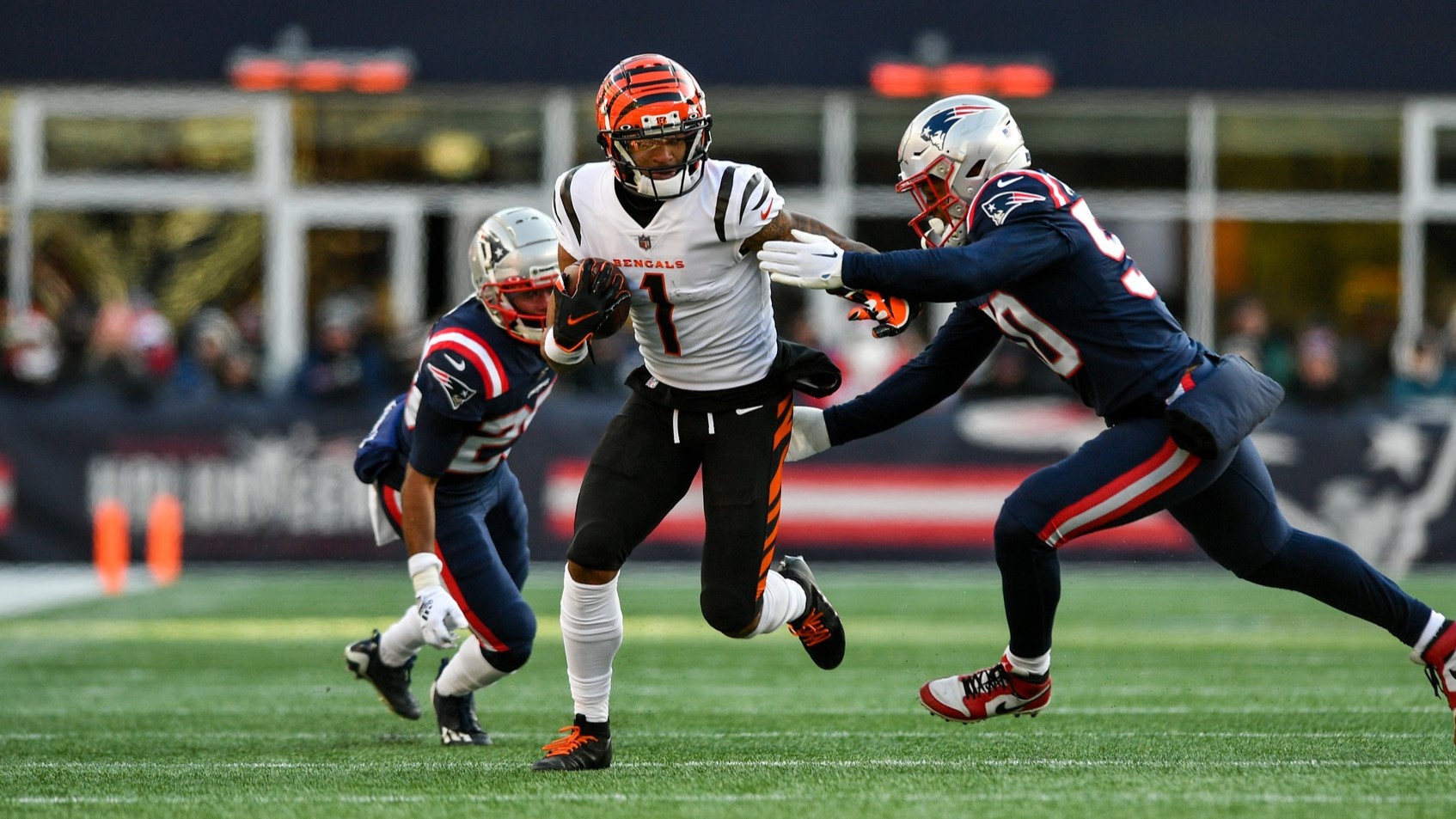 The Bengals celebrated Christmas Eve Saturday by showing a glimpse of Christmas Future in the living room of the masters of Christmas Past with a gut-wrenching 22-18 victory over the Patriots at Gillette Stadium that stretched 11-4 Cincinnati’s winning streak to seven.

With sleeves down just to his elbows and wearing no gloves in his coldest NFL start yet, Bengals quarterback Joe Burrow went from Joe Cool to Steamy Joe when he de-iced the 18-degree weather with a career-high 40 completions for 375 yards, on a day he also tied his own team record with his 34th touchdown pass of the season. Burrow winning his 10th straight December and January game need a last-minute stand on a fumble forced by safety Vonn Bell and recovered by nose tackle Josh Tupou.

Burrow hit wide receiver Trenton Irwin for two touchdowns and wide receiver Tee Higgins during Higgins’ 131-yard day before the Pats began to crawl back in it.

With the Bengals trying to protect a 22-18 lead on a third-and-three with 3:12 left, Burrow threw a screen to wide receiver Ja’Marr Chase and Pats edge Matthew Judon forced a fumble the Pats recovered at the Bengals 43 and suddenly were on the Bengals 15 at the two-minute warning when cornerback Eli Apple was called for a hold and the Pats jettisoned their running game.

The comeback began when Burrow went back shoulder on the right sideline while Chase kept running the route on a third-and-11 late in the third quarter. The ball went right to cornerback Marcus Jones, who weaved his way down the left sideline for a 69-yard pick-six that cut Cincinnati’s lead to 22-6 (Nick Folk missed the extra point). Then, the Bengals went three-and-out on three pass plays. On third-and-five, the Pats jumped a screen and Burrow had to throw it into the ground with still three minutes left in the third quarter.

It fired up the Pats. Quarterback Mac Jones, booed off the field at halftime, had time to convert two third downs to Kendrick Bourne, the second being a 29-yard moonball that Bourne came down with among three defenders. On third-and-goal from the Cincinnati five, Jones found Bourne again, with cornerback Cam Taylor-Britt’s back to the quarterback, and it was 22-12 when the two-pointer failed.

It looked like the Bengals had sealed it on the next possession. The first snap after the Pats touchdown was Higgins’ jump ball for 31 yards, putting him over 100 yards for the fourth time this season and 10th time in his career. On third-and-four, Burrow threw a beautiful ball down the seam to Irwin and it just went off his fingertips in the end zone. Then Evan McPherson’s 43-yard field goal try sailed left with 6:59 left after he had missed an extra point in the first half and another missed PAT was wiped out by penalty.

New England looked like it had some holiday magic working on the next drive, starting with a 28-yard pass to Bourne that was originally ruled incomplete, before the Patriots challenged it and the replay showed Bourne somehow got both feet in bounds. Two plays later, Jones was called for intentional grounding when he got rid of the ball as Bell was taking him down on a blitz, but Zac Taylor threw his own red flag on the play, arguing Jones had lost control before slipping it out of his left hand. To Taylor’s dismay, the ruling stood, and two snaps later Jones threw up a prayer on third-and-29 that was batted down, but miraculously fell into the waiting arms of Pats receiver Jakobi Meyers for a touchdown that made it 22-18 with another missed PAT by Folk.

Among the Bengals defensive highlights early on were slot cornerback Mike Hiton securing a third-down tackle on Meyers in space a yard shy of the first down, a sack by Tupou in the shadow of the Pats’ goalposts set up by Bell’s blitz (one of four sacks) and tackle Cam Sample’s half-sack bolting out of the interior.

Burrow finished the first half onslaught the way he started it, with a microwave touchdown drive he completed with his third touchdown pass of the day, tying his own Bengals record with his 34th of the season. It was Irwin’s second of the day, a four-yarder on third down he ripped away from cornerback Shaun Wade. Slot receiver Tyler Boyd wriggled for a first down converting a third-and-eight and right tackle Hakeem Adeniji, playing for Collins, was all over 10.5-sacker Josh Uche and didn’t let him near Burrow on the touchdown pass. Boyd, who dislocated his finger two weeks ago against Cleveland, reaggravated it Saturday and missed some snaps in the second quarter, but battled through for three catches.

That left Burrow with one of the great first half performances in Bengals history with a heated 284 yards on 77 percent passing (28-36) for a 115.7 passer rating. But that wasn’t more than the 344 yards he had in the first half against the Falcons back in October.

He hit his first four passes for 73 yards in the game’s opening drive the Bengals dissected Belichick’s defense on just five plays and 2:36. The 6-4 Higgins was no match for the 5-8 Marcus Jones on a 39-yard fling perfectly placed for Higgins to high-point it.

The Pats were forced to call a timeout when they had 12 men in the huddle and running back Joe Mixon picked up a first down when he was wide open for a flip in the flat after he carried out his play-action fake. Then from the Pats 9, Higgins was wide open under a zone at the 1 and proceed to bowl over cornerback Jonathan Jones for the game’s first touchdown. Kicker Evan McPherson then missed the first of his first two wide extra points.

But Burrow kept the heat on in the frost. After Bengals nose tackle DJ Reader forced a sack, Burrow sliced them again, this time five-for-five for 48 yards. He converted his first third down when he ran to his right away from Pats sack ace Matthew Judon needing three yards and he hook slid for the first down.

Then on first down Burrow took advantage of late safety help for a 23-yard touchdown pass when he dropped a beauty to wide receiver Trenton Irwin on what looked to be a post-pattern and he made a nice lunging catch just before strong safety Devin McCourty could get over there. Burrow was literally perfect with a 158.3 rating on nine-for-nine passing for 121 yards.

McPherson missed the PAT again, but a Pats’ roughing penalty moved the ball to the 1, so they went for two and running back Samaje Perine got stacked up when he tried the right side.

But the Bengals’ 12-0 lead marked the Patriots’ biggest deficit heading into a second quarter at Gillette in nine years with Burrow smoking in the first quarter on 13 of 15 for 165 yards while Mac Jones had 0.0 yards

It quickly became 15-0 on the second play of the second quarter when McPherson knocked through a 28-yard field goal after Mixon’s two-yard touchdown was called back on holding by former Patriots tight Devin Asiasi. The drive was made by Burrow’s third-and-17 conversion to Chase, left one-on-one with Marcus Jones and when he stopped in front of him on the right sideline it was an 18-yard first down in the red zone.

But on their next red zone trip, Burrow suffered his interception inside-the-20 all season and it translated into McCourty’s 34th career interception when he got inside Boyd at the Patriots 15. It looked like Chase might have got them there a little sooner than that when Burrow put a deep ball on Chase’s shoulder pad that he couldn’t corral.