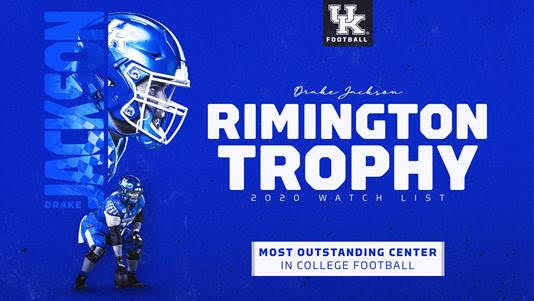 Trophy awarded to the nation’s most outstanding center

The Versailles, Kentucky native has started in 36 consecutive career games as the anchor of Kentucky’s offensive line, the “Big Blue Wall.” In 212 plays this season, Jackson has totaled 18 knockdowns without allowing a sack or a quarterback pressure. UK currently leads the Southeastern Conference and ranks 19th nationally in rushing offense (212.3).

In 2019, he had 44 knockdown blocks, missed only two assignments in 845 play and allowed only one sack in helping the Wildcats break single-season school records for rushing yards (3,624), rushing touchdowns (36) and yards per rushing attempt (6.32).

During the preseason, Jackson was named to the All-America Second Team by Athlon Sports and was a preseason first-team All-SEC selection by the media, Athlon Sports and Phil Steele. He is also a candidate for the Outland Trophy, given to the best college football interior lineman.

Jackson, who was elected one of UK’s 10 team captains this season, graduated in December of 2019 with a degree in agricultural economics and is currently working on a master’s degree in kinesiology and health promotion.

Because the selectors of these three All-America teams can place centers in a “mix” of offensive linemen that includes guards and tackles, their 11-man first teams can often have two centers. The Rimington Trophy committee’s policy is to count all players that play primarily the center position for their respective teams as centers, even though they may be listed as guards or tackles on the All- America teams.

The center with the most first team votes will be determined the winner. If there is a tie with first team votes, then the center with the most second team votes will win. If there is still a tie, the winner will be determined by a majority vote from the Rimington Trophy committee. Because of COVID-19 and the ever-changing guidelines of in-person events, details of the annual presentation will be announced when confirmed.

Dave Rimington, the award’s namesake, was a consensus first-team All-America center at the University of Nebraska in 1981 and 1982, during which time he became the Outland Trophy’s only two-time winner as the nation’s finest college interior lineman.