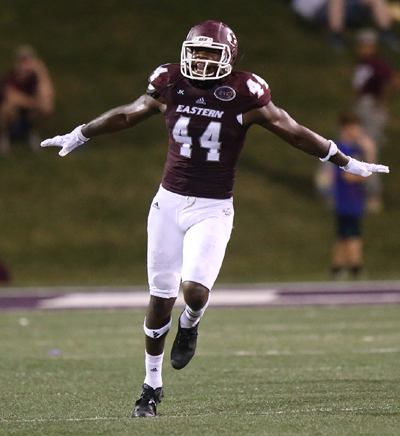 The redshirt junior from Dayton, Ohio played in three games in 2017 before missing the rest of the season with an injury.  In those games, Patrick totaled nine tackles, three tackles for a loss, two sacks and one forced fumble.

The 2018 season begins for the Colonels on August 30 when Morehead State visits Roy Kidd Stadium.  For season ticket information, contact the EKU Athletics Ticket Office at 859-622-2122.

As a sophomore in 2016, Patrick was a first team All-Ohio Valley Conference selection.  He was chosen to the 2016 Hero Sports Sophomore All-America first team.  Patrick had 53 tackles, led the team with 10 tackles for a loss, led the team with seven sacks and had 10 quarterback hurries.  He was second in the OVC, and 42nd in the nation, with an average of 0.64 sacks per game.

Earlier in July, Patrick was picked to the Preseason All-OVC Team by league coaches and communications directors.

The Eastern Kentucky University football program features the “Best Tradition In FCS Football”, having won two national championships, 21 conference titles and made 21 playoff appearances.  No other FCS team has won at least two FCS national titles and 20 or more conference championships.  EKU has had 66 All-America selections and 33 NFL draft picks.