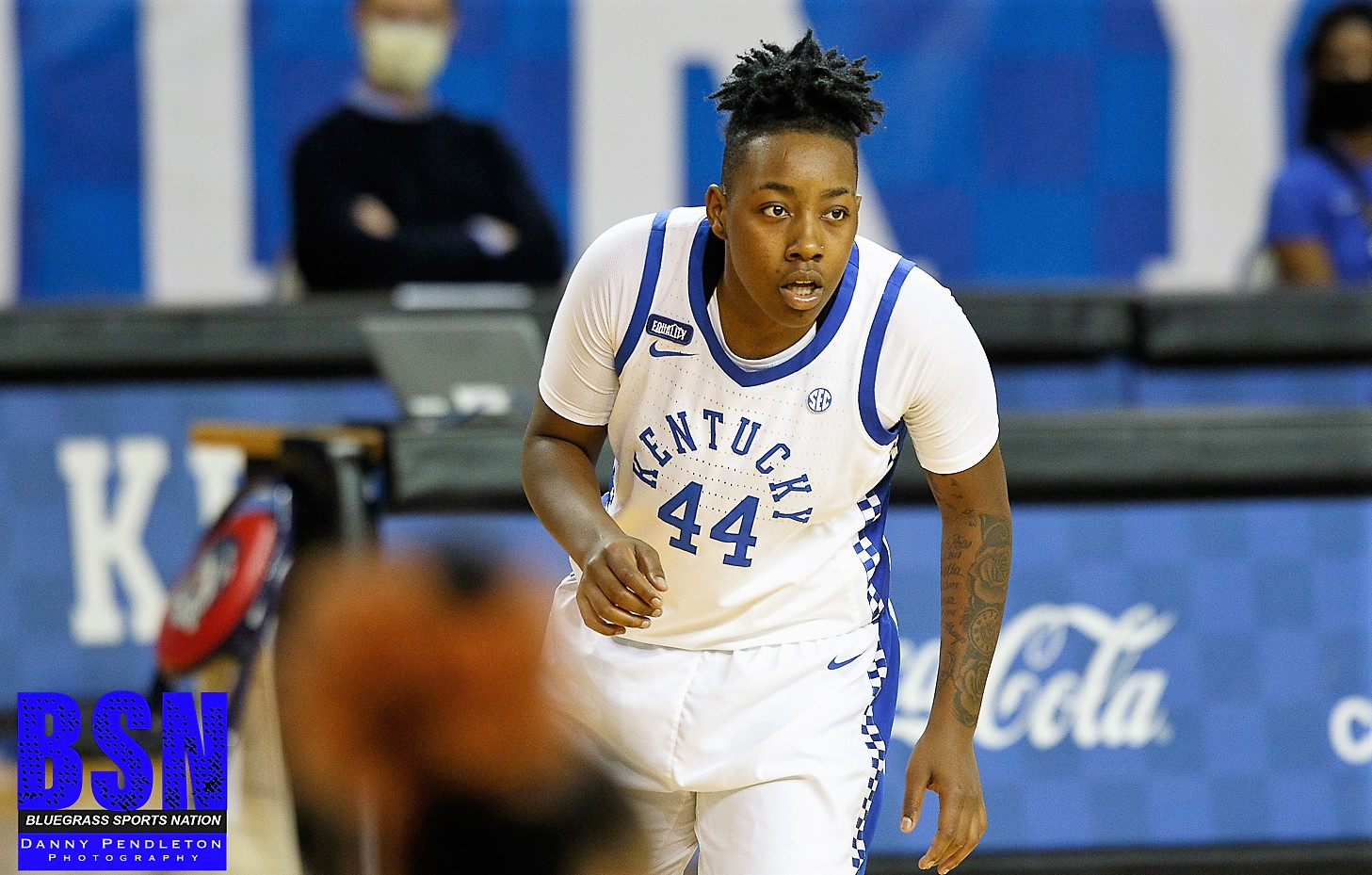 Dre’una Edwards set career highs with 27 points and 15 rebounds as No. 11 Kentucky topped Belmont 70-50 on Sunday afternoon at Memorial Coliseum.

KeKe McKinney and Chasity Patterson each had 10 points for Kentucky, while Robyn Benton and Blair Green had nine points apiece.

Kentucky (2-0) was without defending SEC Player of the Year Rhyne Howard, as well as Tatyana Wyatt, as each served the second game of their suspensions.

Kentucky scored first in the game, on a Green putback, but then fell behind as Belmont closed a 7-2 run on a fast break layup by Maddie Cook to take a 7-4 lead.

However, the Cats would then score 10 in a row, with Patterson and Olivia Owens each scoring four in the run, to take a 14-7 lead with 1:16 to play in the first period. Kentucky would lead 15-10 after one quarter of play.

In the second quarter, Belmont scored first on a Cook jumper to get within three, 15-12. The Cats would score the next three points to lead by six before Belmont answered with three of its own, making it 18-15 with 6:20 to play in the half.

That’s when Kentucky went on another run, this one a 9-2 spurt. It started with a Robyn Benton jumper, then continued with two Edwards baskets. After Belmont got their only two points in the run, Green drilled a three to give the Cats their first double-digit lead of the game, 27-17.

Kentucky would take a 32-23 lead into the break behind 12 points and six rebounds from Edwards. Green and Owens each had five for the Cats in the first 20 minutes.

Edwards stayed hot as the third quarter got underway. She scored the first four points of the second half on a pair of layups, increasing the UK lead to 36-23. The teams would trade baskets, keeping the lead at 13, until Benton nailed a three-pointer to extend the UK lead to 43-27.

Belmont would not go away, scoring four in a row to get back within 43-31 with 3:21 left in the third quarter. Edwards would score the Cats’ final six points of the period and Kentucky would take a 49-36 lead into the final period.

Again in the fourth quarter, Belmont would rally. The Bruins outscored the Cats 11-6 to start the final stanza, cutting the UK lead to 55-47 with 5:51 to play.

But Kentucky again had the answer. An 11-0 run, keyed by Edwards and McKinney, sealed the game for the Cats, who held their largest lead as the final horn sounded.