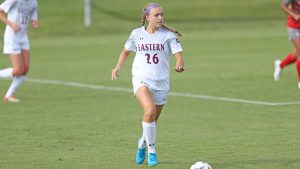 The game was tied, 1-1, in the 76th minute when freshman Kylie Thompson received a pass from sophomore Erin Torrence on a breakaway, drew MSU keeper Michelle Washburn out of the box and buried a shot from distance to give EKU (4-3-2, 1-0-1 OVC) the late lead.

Thompson’s first collegiate goal looked like it would be the game-winner, until EKU was whistled for a handball in the box with just over a minute left in regulation. Cara Maher converted the resulting penalty kick to tie it and force overtime.

Six minutes into overtime, senior Jordan Foster took on a defender one-on-one, got past her and delivered a beautiful cross to Wolski at the far post, who tapped it in for the golden goal.

Wolski – a 2016 OVC All-Newcomer selection – recorded two assists last season, but this was her first-career goal.

“We knew coming into today how tough Morehead State is to play against on its home field,” head coach Nick Flohre said. “While we’re not happy with the goals we gave up, we’re very happy with how we’re creating chances to score and getting goals because of them. The girls are working really well together in the attack.”

Senior Emmi Carroll got the Colonels going early when she headed in a corner kick off the foot of sophomore Sam Eastes in the ninth minute to make it 1-0. It was Carroll’s 15th career goal, which ranks third all-time at EKU.

Eastern outshot Morehead State, 15-10, on the day. Foster led all players in the game with six shots, three of which were on target.

Senior goalkeeper Anna Hall made three saves in the game. Center backs Katie Shaffer and Haley Kemper played all 96 minutes of the thrilling win for EKU.

“The girls should be proud of how they’ve fought this weekend and showed such great determination and grit to open OVC play,” Flohre added.