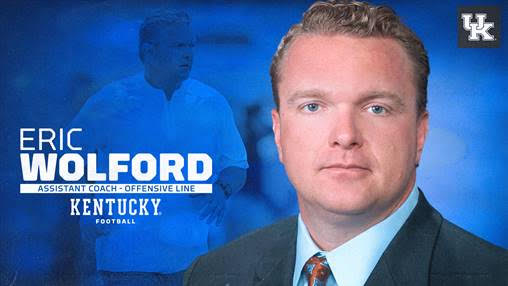 Wolford has 25 years of coaching experience, including two in the NFL

Wolford, who was at South Carolina the previous four seasons as the offensive line coach, comes to the Bluegrass with 25 years of coaching experience, including two in the National Football League.

“I’m honored to have Eric Wolford join our staff,” Stoops said. “I’ve known Eric and worked with Eric for a long time. I knew it would take a special person to fill this role and we found the best candidate. I know what we are getting with Eric Wolford and he will continue to build on the legacy that John Schlarman started. He’s intense, he’s detailed but he also has the unique ability to connect with people.”

This season at South Carolina, Wolford’s unit helped pave the way for running back Kevin Harris to lead the Southeastern Conference in rushing and rewrite the Gamecock record books. Harris finished the regular season with 1,138 yards rushing, just the ninth player in school history to rush for 1,000-plus yards in a season. He had five 100-yard games, including two with 200-plus yards, joining George Rogers and Marcus Lattimore as the only players in school history with multiple 200-yard games.

“I’m excited to come to Kentucky as the offensive line coach,” Wolford said. “I’ve known Mark Stoops a long time and I’ve been very impressed with how he’s built his program. I’ve had a front row seat, playing against Kentucky the last four years, and Kentucky is blue collar, they are tough, they have pride, they have attitude, and they have discipline. His strength coaches, Mark Hill and Corey Edmond, have done a great job in developing players and in recruiting, his staff has done a wonderful job of going out and finding players who can play in the SEC and at a high level.

“I’m blessed to have the opportunity to coach the ‘Big Blue Wall,” Wolford added, “I want to continue the legacy of John Schlarman. He was a wonderful man and watching film and seeing how his line played, it’s not hard to see what a great offensive line coach he was. We are always going to remember Coach Schlarman in our room. Always.”

In 2019, the offensive line helped five different running backs rush for more than 100 yards in a game.

In 2018, Carolina went 7-6 and advanced to the Belk Bowl. The Gamecocks averaged 30.1 points, 152.8 yards rushing, 272.8 yards passing and 425.6 total yards, the best marks since 2014. They had five games of 500 yards or more for the first time in school history, including back-to-back games of 600 yards against Chattanooga and Clemson. In his first season at Carolina, the Gamecocks finished 9-4 and defeated Michigan in the Outback Bowl, 26-19.

Off the field, Wolford was named a top-25 recruiter by Rivals following the 2018 February signing date.

Before coming back to Carolina, Wolford spent the previous two seasons (2015-16) in the NFL as the San Francisco 49ers assistant offensive line coach.

Prior to his stint with the 49ers, Wolford logged 19 seasons as a coach at the collegiate level, including five (2010-14) as the head coach at Youngstown State University. After a 3-8 mark in his first season, the Penguins compiled a 28-18 mark over his final four campaigns, were ranked in the top-10 three times, and broke 32 school records during his tenure. Highlights included a 2012 win over Pitt – the first win over a BCS team in school history, and a 2011 win over top-ranked North Dakota State, while overseeing the squad’s highest GPA on record for four-consecutive seasons. He finished 31-26 overall at the helm.

Wolford also served as South Carolina’s run game coordinator and offensive line coach in 2009 under head coach Steve Spurrier after a two-year stint at Illinois where he held a similar post. Under Wolford’s tutelage, the Illini, who played in the 2008 Rose Bowl game, led the Big Ten in rushing (2007) and passing (2008), while topping the 5,000-yard mark in total offense for just the third and fourth times in school history. Wolford was a Rivals Top-20 National Recruiter in 2008.

Wolford spent three seasons (2004-06) at Arizona as the offensive line coach, where he was on the same staff as Mark Stoops. UA led the league in fewest sacks allowed in 2004 and was second in 2005. He was also an integral part of back-to-back top-25 recruiting classes.

Wolford spent the 2003 season at North Texas, where his offensive line paved the way for tailback Patrick Cobbs, who earned the Sun Belt Offensive Player of the Year Award. Wolford also helped lead UNT to its third-consecutive bid to the New Orleans Bowl.

Before joining North Texas, Wolford enjoyed three-year stints at both Houston and South Florida. While at Houston, he coached a number of positions, spanning offense, defense and special teams. In 2002, Houston enjoyed a dramatic turnaround, going from a winless season to five victories.  During that time, Wolford coached five all-conference players.

Wolford had the unique experience of coaching in the first three seasons of the USF football program, helping to lead the Bulls to two winning seasons. In year two, the offense put up over 400 yards per game.

Wolford began his coaching career at his alma mater, Kansas State, where he worked as a graduate assistant with the offensive line under John Latina. He then spent two years as the offensive line and strength coach at Emporia State.

Wolford was a four-year starter as an offensive guard at K-State under Bill Snyder. He went on to start 34 games in his career, including 21 at right guard and 13 at left guard. During his senior year, the Wildcats won the school’s first bowl game in the 1993 Copper Bowl, defeating Wyoming. After college, Wolford signed a free-agent contract with the Arizona Cardinals before returning to Manhattan to embark on his coaching career.

A native of Youngstown, Ohio, Wolford, 49, attended Ursuline High School where he was enshrined into the school’s athletics Hall of Fame in 2009.

He received his bachelor’s degree in social sciences with a focus on monetary policy and banking from Kansas State in 1994. He and his wife, Melinda, have two children, Stone and Marlee.

Eric and Melinda started a non-profit organization, inspired by their son, Stone, who was diagnosed with Cardiofaciocutaneous Syndrome (CFC Syndrome) as a baby. Their foundation is called the No Stone Unturned Foundation and is dedicated to embracing, engaging, and empowering children with special needs and their families, with a major focus on any child with any disability. For more information on the No Stone Unturned Foundation, visit the website here: NSUF.org.