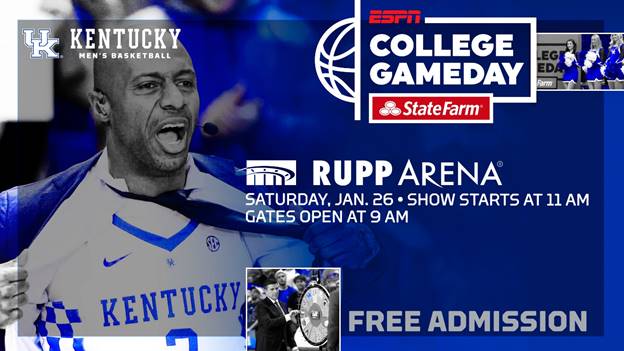 LEXINGTON, Ky. – With the Kansas-Kentucky game as its backdrop, ESPN College GameDay will be at Rupp Arena on Jan. 26.

Admission will be free and fans are encouraged to attend the event. Seats for the show will be available on a first-come, first-served basis. Gates will open at 9 a.m. with the live show starting at 11 a.m. Other segments from the crew for other ESPN shows will be taped prior to 11.

ESPN made the announcement Saturday during its first GameDay stop of the year at Duke. It’s the third straight season College GameDay will feature the Wildcats on their home floor.

Inside Rupp Arena, the ESPN College GameDay crew of Rece Davis, Jay Bilas, Jay Williams and Seth Greenberg will preview the Kansas-Kentucky SEC/Big 12 Challenge matchup, which will feature the two winningest teams in college basketball history. Bilas, Dan Shulman and Maria Taylor will be on the call for the game tipping at 6 p.m.

Normal game-day policies at Rupp Arena will be in place, including the bag policy that requires that bags do not exceed 12” x 6” x 12”. Rupp Arena will also use walkthrough metal detectors, as it has all season. For more information on the game-day policies, please click here. Signs will be permitted at the show, though they are subject to screening for the telecast.

Season men’s basketball parking permits will be honored in their respective lots for both events (ESPN GameDay and Kansas-Kentucky).  The High Street parking lot will open at 7 a.m. for public parking and remain open all day at a rate of $20.

All students attending ESPN College Gameday and/or the Kansas-Kentucky game may begin lining up at the Rupp Arena student gate no earlier than 5 a.m. on Saturday. Rupp Arena staff will coordinate with students in line to determine their intent to attend the 6 p.m. game vs. Kansas.

This will be UK’s 17th ESPN College GameDay appearance overall, behind only North Carolina (18), and the eighth trip to Lexington, Kentucky, tied for second overall. It’s the 10th straight season Kentucky is making an appearance on the show.

With a 6-10 record in College GameDay appearances, the Wildcats will look to make it two wins in a row with GameDay as the backdrop. Although the Wildcats lost their home appearance with the popular ESPN show in town last January, the Wildcats’ most memorable victory of the season in 2017-18 was the 17-point comeback at West Virginia under the spotlight of GameDay.

The Kentucky-Kansas matchup will headline the annual SEC/Big 12 Challenge, the sixth season of the event between the Southeastern Conference and the Big 12 and the fourth straight where all 10 games of the challenge will be played on the same day.

It will be the second time in three seasons UK has hosted the Jayhawks in the annual league challenge. The Jayhawks visited Rupp Arena in 2017 for the first time since 2005. Kansas won the matchup, 79-73, with GameDay in town.

UK has dropped the last three meetings with KU but leads the overall series 22-9. Kentucky is looking to avoid its first four-game skid in the series. The Wildcats lead the series 7-2 in Lexington.

This will mark the third matchup between the two schools on ESPN College GameDay.